As the sectarian conflict intensifies, Shiite forces expand their cooperation against Saudi Arabia while Iraq plays a key role in this regard. 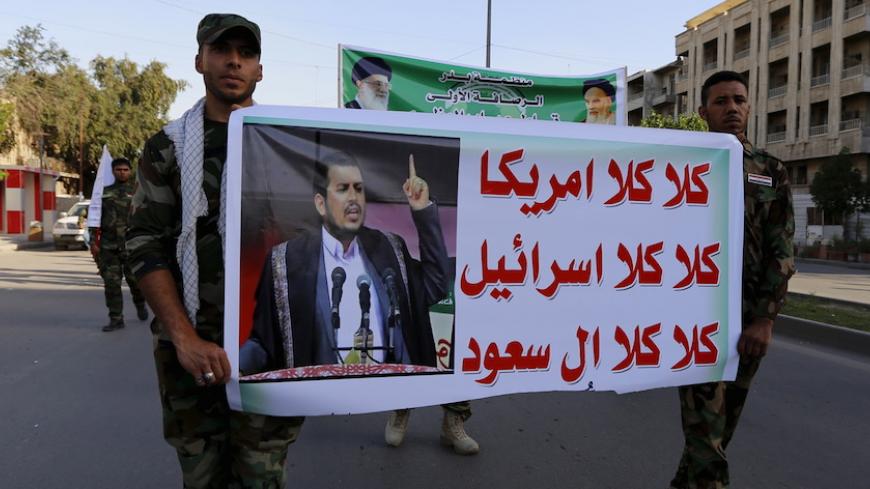 Members of Hashid Shaabi hold a banner of Abdul-Malik al-Houthi during a demonstration to show support for Yemen's Shiite Houthis and in protest of an air campaign in Yemen by a Saudi-led coalition, in Baghdad, March 31, 2015. - REUTERS/Thaier Al-Sudani

NAJAF, Iraq — With the ongoing sectarian conflict in the Middle East, the tug-of-war to find regional alliances to support one sectarian axis over another continues. After Saudi Arabia established a Sunni alliance in December 2015, there are currently indications that Iran is working toward building a corresponding Shiite alliance.

In his annual message addressed to pilgrims on Sept. 5, Iran’s Supreme Leader Ayatollah Ali Khamenei attacked the Saudi alliance and described the Saudi leaders as strife instigators in the region. He blamed them for the chaos and destruction across the Muslim world, naming Iraq, Syria, Bahrain, Yemen and Libya as affected areas.

Iran had made an announcement about forming a Shiite liberation army to face Saudi and Israeli threats, as Iran believes the two countries are allies. On Aug. 18, Brig. Gen. Mohammad Ali Falaki, a commander of the Iranian Islamic Revolutionary Guard Corps (IRGC) who spearheaded several operations in Syria, announced the formation of a Shiite liberation army including men of different nationalities — Iraqis, Afghans and Lebanese, among others.

He said that Gen. Qasem Soleimani, the head of Iran's elite Quds Force, will lead the army whose forces are currently fighting in Iraq, Syria and Yemen. Soleimani hopes to open new fronts in other regions in the Middle East.

Iraq is playing a key role in the formation of the Shiite alliance against Saudi Arabia. To seek Shiite support against Saudi Arabia, a high-ranking Houthi Yemeni delegation, including official Ansarullah spokesman Mohamed Abdel Salam, visited Iraq between Aug. 27 and Sept. 1. The delegation held intensive talks with Iraqi officials, and it met with Iraqi Foreign Minister Ibrahim al-Jaafari, who expressed his country’s firm refusal of Saudi military intervention in Yemen. Prime Minister Haider al-Abadi later welcomed the delegation and said, “Iraq has supported the Yemeni people since the beginning and objected to their oppression and to unjustified aggression on Yemen.”

Abadi revealed during the talks that Iraq sent aid to the Houthis during Saudi Arabia’s attacks on Yemen. The delegation also met with President Fuad Masum before leaving Iraq for Muscat. The delegation is also planning on visiting Lebanon and Iran as part of its regional tour.

Meetings were also held with leaders and figures affiliated with Shiite militias under the Popular Mobilization Units (PMU), such as the militant known as Abu Azrael. The visit was clearly sectarian, as the delegation did not meet with any Sunni Arabs, such as Iraqi parliament Speaker Salim al-Jabouri. The delegation was not interested in meeting with Sunni figures, and Sunni political leaders resented the meetings that negatively affected the friendly relations with Saudi Arabia.

Iraqi Sunni forces condemned the Houthis’ visit. The Sunni Iraqi Forces Alliance issued a statement in the wake of the visit, criticizing Iraqi diplomacy for welcoming “delegations of armed groups like the Houthis.” The coalition claimed that such a step “disrupts Iraq’s Arab ties and exacerbates relations” at a time when openness to the outside world and distance from the ruinous politics of axes are needed. This strategy is what pushed the world to consider Iraq’s sovereignty marred by the stigma of subordination.”

The Houthis’ visit to Baghdad coincided with an official request on Aug. 28 from the Iraqi Foreign Ministry to the kingdom to replace Saudi Ambassador to Iraq Thamer al-Sabhan. The Foreign Ministry’s spokesman Ahmad Jamal said that Sabhan meddled with Iraq’s internal affairs and made provocative statements.

The Sunni coalition responded to the decision, saying, “The Iraqi government’s decision surprised us. This is a dangerous precedent that diplomatic norms between civilized states have never witnessed. It reflects a deliberate attempt to undermine Saudi Arabia’s regional role.” The coalition stated, “Iraqi policies are slipping once again to the brink of unjustified disputes with Arab states, which have supported the Iraqi people in their security and humanitarian dilemma.”

Before Sabhan’s replacement was requested, he revealed a plot against him by Shiite militias. Although the Iraqi Foreign Ministry denied Sabhan’s allegations and called for “caution in making statements,” Aws al-Khafaji, the secretary-general of the Abu al-Fadl al-Abbas Brigades, said Aug. 23 during a television interview that the Saudi ambassador is wanted by his forces and they would honor his assassin.

Along with these developments indicating the entrenchment of the Shiite coalition in the region, Syrian Foreign Minister Walid Moallem visited Baghdad unannounced along with a military and security delegation on Aug. 26. His Iraqi counterpart Jaafari welcomed him. Moallem also met with Abadi. The meetings might ensure security coordination between the two countries in fighting jihadi groups, some of which are backed by Saudi Arabia.

It is noteworthy that many Iraqi fighters are fighting in Syria alongside other Shiite forces from Lebanon and Afghanistan, among others backed by Iran. Enlistment to participate in the battles has increased in Syria after the danger of the Islamic State (IS) in Iraq dwindled significantly.

Several websites published news about the Yemeni delegation’s visit to the higher Shiite authority in Najaf, Ali al-Sistani. The news could have been spread by advocates of forming a comprehensive Shiite coalition to fight the Saudi threats in order to market for the Houthis or to attack Sistani for engaging in the political sectarian conflict in the region. But Al-Monitor found out from an official source in Sistani’s office that the latter denied the news completely. Sistani is known for his moderation and for his calls for adopting the principle of national dialogue and equal citizenship for all instead of sectarianism in dealing with social and political crises.

The above indications show that the region is headed toward entrenchment and expansion of sectarian alliances, which raises concerns that violence and conflict might keep spiraling out of control, even after the elimination of IS.