The Iraqi government has distanced itself from the Saudi-Iranian dispute and adopted a neutral position despite the Iraqi street’s angry reaction to the Saudi execution of Shiite cleric Nimr al-Nimr. 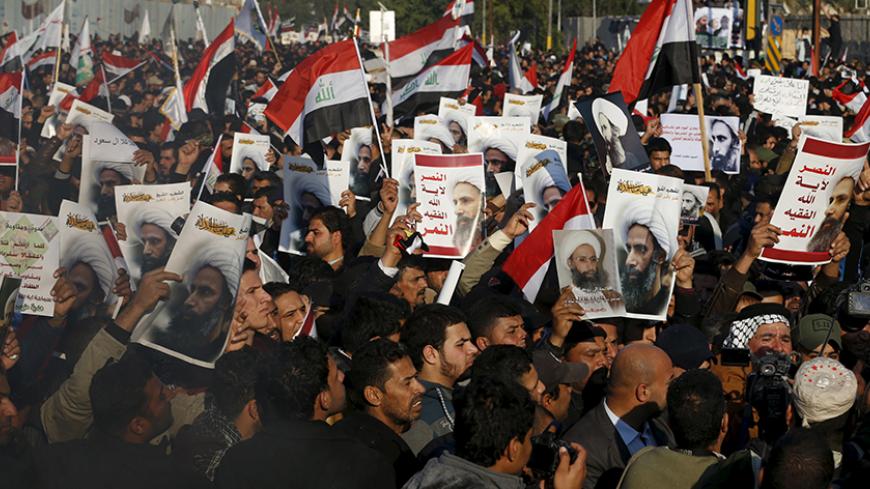 In June, Saudi Arabia announced that it would reopen its embassy in Baghdad after a 25-year rift. Iraqi officials, including President Fuad Masum, had visited Riyadh on Nov. 12, 2014, paving the way for friendlier relations. Saudi Ambassador to Iraq Thamer al-Sabhan said Dec. 16 that the embassy had completed its preparations and that the diplomatic mission would soon head to Baghdad.

But Saudi Arabia’s execution of Shiite cleric Sheikh Nimr al-Nimr on Jan. 2 stirred anger on the Iraqi street and led to demands that the Saudi Embassy not be allowed to officially reopen. Iraqi perceptions about Saudi Arabia are generally negative, with the country seen as a troublemaker and a supporter of Sunni jihadis. The Saudi Embassy is in Baghdad's Green Zone, which houses most governmental offices and foreign embassies; Saudi Arabia also has a consulate in Erbil.

The closure demands came from Shiite parties and militias, among other social forces and figures. The head of the Sadrist movement, cleric Muqtada al-Sadr, called on Jan. 2 for demonstrations in front of the Saudi Embassy. He also demanded that the government prevent “the opening of the Saudi Embassy in our beloved Iraq," saying, "Tyrants have no room among us.”

The Dawa Party parliamentary bloc demanded on Jan. 1 that the Saudi Embassy be closed before it fully reopens and that Saudi detainees in Iraq who have been convicted of terrorist acts be executed in response to the Saudi execution of Nimr.

The League of the Righteous, which has representation in parliament and its own armed group within the Popular Mobilization Units that are fighting the Islamic State (IS), demanded on Jan. 2 that the Iraqi government review the decision to normalize relations with Saudi Arabia.

The head of the Badr parliamentary bloc, Qasim al-Araji, said he considered the killing of Nimr a serious crime, and demanded that diplomatic ties with Riyadh be cut immediately.

These sentiments echoed loudly through Shiite cities in central and southern Iraq, where demonstrations were held to demand that diplomatic relations with Saudi Arabia be severed. The slogans raised focus on different issues linked to Saudi behavior in recent years, including the repression of the Shiite opposition in Bahrain, the offensive on Yemen and support for jihadist groups opposing the Syrian government. Among other demands, the demonstrators called for a boycott of Saudi products.

In Baghdad, security forces blocked protesters’ attempt to enter the Green Zone and break into the Saudi Embassy.

In light of this commotion on the streets, the Iraqi government has distanced itself from the strained Saudi-Iranian ties following the execution of Nimr and other developments, such as the storming of the Saudi Embassy in Tehran on Jan. 2 and the rupture of ties between the two countries. The government also turned a deaf ear to Iraqi Shiite forces close to Iran that demanded that ties be cut with Saudi Arabia.

On Jan. 6, Iraqi Foreign Minister Ibrahim al-Jaafari offered to mediate between Iran and Saudi Arabia. Neither party has, however, responded to his offer. Middle East Online reported, “Iraqi Foreign Ministry spokesman Ahmad Jamal said Jan. 5 that in a phone conversation with Saudi Foreign Minister Adel bin Ahmed Al-Jubeir, ‘Jaafari confirmed that the Saudi mission is safe and the Iraqi government is committed to its protection.’”

The official Iraqi position was incomprehensible to some extremist circles. Although it has condemned the execution of Nimr, Iraq also supported the Saudi position against Iran in the closing statement of the Arab League meeting on Jan. 10. This statement condemned the attack against the Saudi Embassy in Tehran and supported the Saudi position against Iran, demanding that Iran stop interfering in Saudi affairs.

Prime Minister Haider al-Abadi’s government seems to be trying to adopt a position neutral to the conflict between Iran and Saudi Arabia. Iraq’s situation is currently complicated by the war against IS and the economic crisis caused by declining oil prices. Abadi seems to be looking to preserve any potential support in the fight against IS, which challenges the existence of the Iraqi state itself.

Abadi took office with a moderate and conciliatory stance compared with his predecessor, Nouri al-Maliki; this requires Abadi to take the middle ground in domestic and regional crises.

Grand Ayatollah Ali al-Sistani assumed a prominent role in the appointment of Abadi to his current post and supports the normalization of ties with Saudi Arabia. In his Jan. 2  statement on Nimr's execution, Sistani avoided escalation and fueling the sectarian conflict in the region.

The official political and religious positions in Iraq do not support a confrontation with Saudi Arabia, despite popular Shiite pressure to avoid normalizing ties.

Nimr’s execution has added fuel to a fire that still smolders between Saudi Arabia and Iraq. It should be noted that the relationship between the two countries was completely broken when dictator Saddam Hussein attacked Kuwait in 1991. Ties remained severed after 2003 as many Iraqis viewed Saudi Arabia as a major troublemaker in Iraq. Nimr’s execution also intensified stances opposing Saudi Arabia in the region and in Iraq. It also placed Iraqi political and religious figures with a moderate point of view toward Saudi Arabia in a difficult position, and perhaps strengthened the extremists’ stance.

The demonstrations against Saudi Arabia in Iraq and the demands that the Saudi Embassy be shut may mean that the execution of Nimr has led to the rise of extreme voices against Saudi Arabia in Iraq. As a result, Saudi Arabia must evaluate the vulnerable sectarian situation in the region so as not to provide extremists with excuses nor weaken the moderates who can hold dialogue and reach understandings that will serve the interests of the two countries and the region as a whole.