Hezbollah leader Hassan Nasrallah's verbal attack against Saudi Arabia and its regional allies in a televised speech March 27 about Operation Decisive Storm in Yemen could be part of a process leading to much greater tensions and even conflict in Lebanon. 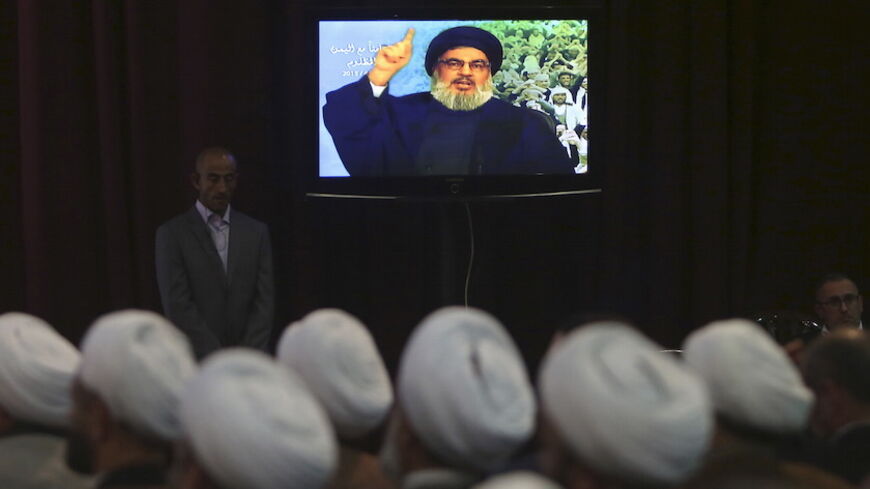 Lebanon's Hezbollah leader Hassan Nasrallah talks to his Lebanese and Yemeni supporters on a giant screen during a speech against US-Saudi aggression in Yemen, in Beirut, April 17, 2015. - REUTERS/Aziz Taher

BEIRUT — Lebanon is going above and beyond to maintain internal security and stability, despite the shaky situation in various Arab countries. This quest was finally represented by the dialogue between the Sunni Future Movement and Shiite Hezbollah, launched on Dec. 23, 2014, under the banner of alleviating tensions between Sunnis and Shiites, and is still ongoing, sparing the country security problems and neutralizing the region's conflicts.

However, Operation Decisive Storm, the Saudi Arabia-led military operation launched March 25 in Yemen, sent the internal situation in Lebanon out of the frying pan and straight into the fire. The operation contributed to fueling the political debate between the pro-Saudi Future Movement and Hezbollah, which supports the Houthis in Yemen, who are backed by Iran.

After the two Lebanese parties agreed during the 10 rounds of dialogue to neutralize the controversial issues — the Syrian crisis and the Lebanese presidential elections — in a way that helps control the street, the war in Yemen created a new challenge.

Hezbollah leader Hassan Nasrallah launched a severe verbal attack on Saudi Arabia in a televised speech March 27, describing the “Arab leaders of being lazy” and saying that “Saudi Arabia has not done anything for the Arabs, except creating the Islamic State.”

The kingdom replied through its ambassador to Lebanon, Ali Awad Asiri, who said, “Nasrallah's speech reveals the confusion of those [Iran] it represents.”

The debate also targeted the Future Movement leader, member of parliament Saad Hariri, who said, “Nasrallah is following in [Supreme Leader Ayatollah] Ali Khamenei’s footsteps in creating distortion and misinformation in addition to showing off its strength and fueling sectarianism.” He described the speech as “an orchestrated air of historical fabrications and digging up old spite as well as exposing all the grudges it holds against Saudi Arabia, its founder and its leadership.”

This escalation, which diminished with the end of Operation Decisive Storm in Yemen, has managed to calm the positions in general. However, these still included underlying messages, especially as far as the Future Movement is concerned. Several MPs and ministers from the Future Movement stressed that dialogue with Hezbollah is ongoing. However, the movement continued directing accusations toward Hezbollah.

Future Movement member MP Samir Jisr stressed, “The dialogue with Hezbollah is irreversible despite all the differences, and we started this dialogue out of conviction, not duty, as it is an urgent national necessity.” Jisr also said, “Hezbollah Secretary-General Hassan Nasrallah was not successful in his attack and insults which he aimed at the Wahhabi belief,” describing him [Nasrallah] as “ungrateful.”

“Saudi Arabia supported the reconstruction of Lebanon after the civil war and is the largest supporter of the Lebanese economy,” he added.

MP Atef Majdalani [of the Future Movement] said that dialogue between the Future Movement and Hezbollah “is always effective because it aims at alleviating the tensions and electing a president,” adding, “We have not yet achieved the aim of the dialogue, which is to alleviate tensions.”

Speaker Nabih Berri, the dialogue sponsor, announced that he would ask Hezbollah and the Future Movement to express their disagreements more calmly. The Future Movement has yet to adopt a stance following Nasrallah’s recent speech.

“This escalating tension is worrisome,” security sources told Al-Monitor, expressing concerns about the political Sunni-Shiite debate affecting the security situation in Lebanon. According to these sources, things could spin out of control and tensions could reach the street — similarly to the sectarian clashes that used to take place in areas such as Tariq el-Jdide in Beirut and Qasqas, as well as the towns of Saadnayel and Taalabaya in the Bekaa Valley. These Sunni-dominated areas are located close to Shiite regions.

What increases the sources’ concerns is this provocation, which was deliberately initiated by Hezbollah, and its secretary-general in particular, for the first time against Saudi Arabia. They consider Nasrallah’s recent positions quite odd, after he had adopted, over the years, thought stressing the rejection of Sunni-Shiite strife and promoting coexistence. Despite all the verbal and moral attacks suffered by Hezbollah in the period following the assassination of former Prime Minister Rafik Hariri, as well as after its involvement in the war in Syria, the party never changed its rhetoric, until now.

The security sources wondered what is behind this change and provocation and whether internal sectarian strife no longer frightens Hezbollah. Did it stop trying to maintain a minimum level of consensus on the Lebanese resistance and its weapons? To what extent is this thought related to the geopolitical changes expected in the region?

In addition, they linked the provocation to the changes anticipated in the region, starting with the signing of the Iran nuclear framework deal in Lausanne, Switzerland, in March. It coincided with leaks about a possible predilection for a new geopolitical mapping of the Middle East, amid the ongoing wars in the Arab countries, which seem to be ongoing for the foreseeable future.

Analysis in this regard seems to focus on the religious and sectarian tension driving the conflicts in the region. However, those conflicts might be in line with a plan that goes even further; they might aim at dividing the region to establish sectarian entities, as the only solution to put an end to all the region's differences. This is in line with the concept of ​​the new Middle East and the possible adoption of federalism in the region.

Thus, according to the security sources, every now and then there are talks and analyses about the establishment of Kurdish, Alawite, Sunni and Shiite states as long as a military takeover remains far-fetched.

Any new division of the region similar to the Sykes-Picot Agreement, concluded in 1916, will not be able to eliminate the strongly present Shiite component, especially after Iran became a key player in the region, either through its support for Hezbollah in the war against Israel or by performing a key role in the developments in Iraq, Syria and Palestine, or through its political success in signing the nuclear deal with the five permanent members of the UN Security Council and Germany, shattering the isolation that was imposed on it.

Saudi Arabia’s activities in the region are being manifested, most recently in Yemen. Whether the kingdom was forced to get involved in the military operation in Yemen by the West or intended this intervention to show its strength and affirm its status as a country able to control its surroundings, it will not be able to resolve this battle, as long as it is limited to airstrikes.

Saudi Arabia announced the end of the operation April 21, after it was convinced that airstrikes cannot continue indefinitely, and that the solution must be political. The Saudis also realized that a protracted war would push the Houthis to use weapons they had not resorted to yet. In addition, any development of this military conflict may expose Saudi Arabia to a lack of internal stability, turning it into a new target for terrorist groups.

“Those informed about Saudi Arabia’s political administration consider that the kingdom’s failure to achieve its goal in Yemen will push it to compensate in another arena,” the security sources said, quoting foreign diplomatic circles. This arena is likely to be Lebanon, primarily because of its political and sectarian division, and because of the presence of a large Lebanese sect that supports the Houthis and what they represent, and because other Arab arenas are preoccupied with their own wars.

The initial repercussions of this “Saudi catharsis” will be the intensification of the conflict between the Future Movement and Hezbollah — which has already begun to manifest itself — leading to the end of the dialogue and renewed tensions in the street, deepening sectarian strife, which could result in armed clashes. In practical terms, this means taking Lebanon to the unknown, and thus distracting the Lebanese army from its main objective, which is the fight against terrorism and control of the street.

March 14 and Hezbollah sources refused to comment on the matter when approached by Al-Monitor.