How Lebanon Can Avoid Another Civil War

Amal Mudallali writes that the Arab Spring has changed the landscape in Lebanon and brought back a sense of empowerment to the Sunni community, especially its Islamist component. However, Lebanon has thrived only when compromise and accommodation guided decisions, and not when its communities tried to militarily overcome each other. 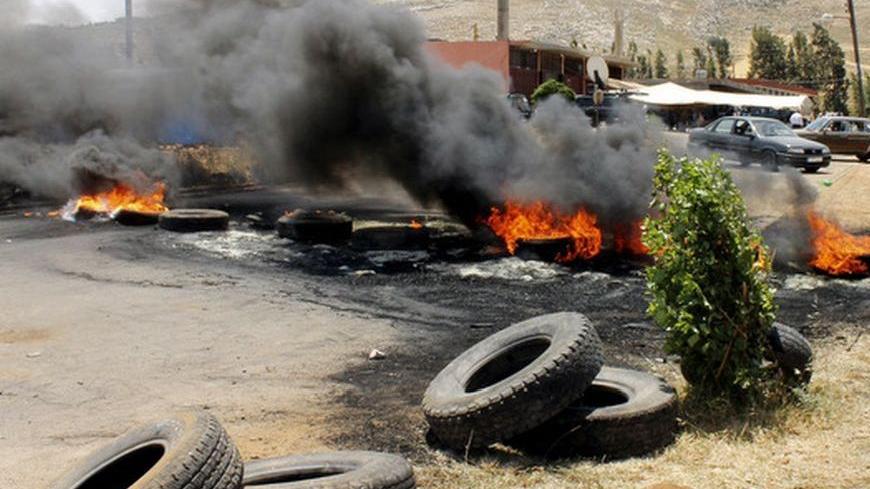 Tires set ablaze by residents to protest against the kidnapping of a hardline Sunni Lebanese supporter of the Syrian revolt against President Bashar al-Assad by Lebanese Alawites, block the main entrance of the northern Lebanese village of Wadi Khaled June 11, 2012. - REUTERS/Stringer
June 11, 2012

Recent deadly violence between Alawis and Sunnis in Tripoli, Lebanon, is raising fears of full-scale Sunni-Shiite war in the country. But Lebanon is not at the cusp of civil war, because if there is a consensus on anything among its quarreling parties, it is their rejection of a new war.

Weapons, money and will are needed to start a war. The only party in Lebanon with sufficient weapons and money is Hezbollah, but a civil war is not in its interest.

The "Party of God," for the first time in its history, has almost total control of the important levers of power in Lebanon. With the loss of its strategic ally, the Syrian regime of President Bashar al-Assad, Hezbollah cannot afford to deplete its resources — which will become scarcer if its Syrian lifeline is severed — in an internal conflict. Also, the party has always insisted that its weapons are for fighting Israel and not for internal use, although the events of May 7, 2008 proved this assertion false when those weapons were used in Beirut against Hezbollah’s opponents.

Hezbollah’s adversaries in the March 14 movement have small arms, at most, and lack well-trained and battle-tested forces. The Sunnis and their Christian allies in the March 14 movement have no interest in a civil war that would devastate the Lebanese state. The announced project of March 14 is building the state; a civil war would not only destroy that project but could mean the end of Lebanon as we know it.

Still, the sad history of the 1975-1989 war shows that conflicts can develop a deadly momentum. Thus the key to avoiding this trap is the Shiite community and especially Hezbollah, which is seen by its opponents as pushing them into a corner.

The majority of the Sunnis feel angry and targeted. Street violence over the last few years is only a manifestation of long-simmering resentment at what Sunnis see as a campaign to finish them off politically.

The Sunni political leadership dates this campaign to Syrian military intervention, which began in 1976. A prominent Sunni member of parliament, speaking on condition of anonymity, told me that “the Syrian army entered Lebanon on the side of the [Christian] Maronites and stayed in Lebanon on the side of the Shiites. The majority of the Sunnis feel that the Syrians are always with the Shiites against them. This is the alliance of the minorities.”

This Sunni suspicion and resentment exploded in the streets of Beirut after the February 14, 2005 assassination of Prime Minister Rafik Hariri. Sunnis first accused the Syrians of being behind the assassination before the UN Special Tribunal for Lebanon named Hezbollah operatives as suspects. The indictments raised tension between the two sects to new heights.

The withdrawal of the Syrian army from Lebanon in 2005 did not end Lebanon’s troubles. Instead, it ushered in an internal confrontation that culminated with Hezbollah’s toppling of the government of Prime Minister Saad Hariri in January 2011, which the Sunnis saw as a coup against them. The appointment of Prime Minister Najib Mikati added insult to injury. The Sunnis complained that Hezbollah was choosing their prime ministers. Hariri, the son of Rafik Hariri, was forced to leave the country under threat of assassination.

The events in Tripoli in the aftermath of the arrest of the Syrian regime's opponent Shadi Mawlawi in mid-May brought to the forefront another source of Sunni anger — namely, a Syrian effort to paint its opponents as Salafis or members of al-Qaeda. Street protests spread like fire in a haystack from Tripoli to other Sunni neighborhoods and towns in the Bekaa. In the end, Mawlawi was acquitted of the charges and released on bail of 500,000 Lebanese pounds — the equivalent of $300, a miserly sum for an alleged al-Qaeda security threat.

Many Sunnis see Lebanese government efforts to distance itself from the Syrian conflict as hypocritical because they believe that the government turns a blind eye to Hezbollah support for the Syrian regime while punishing Lebanese Sunnis for assisting the opposition.

Political leaders in Tripoli admit that there are Salafis and other religious extremists in the city, but put the number at less than 500 members and say that not all of them are violent. They admit that there are 30-50 people in Tripoli who are guns for hire or as one political advisor put it, “soldiers of fortune” who are “loyal to the highest bidder.”

Hezbollah is said to control three Sunni groups in the city which, Tripoli politicians claim, are used to create chaos and undermine the moderate Sunni leadership. There is also the pro-Syrian Alawi militia of Rifaat Eid, which has been absurdly calling for the Syrian army to return to Lebanon and help him against the Sunni factions in the city. Accounts from Tripoli put Eid’s militia at around 400 men trained and equipped by the Syrians. The situation has been further inflamed by the influx of thousands of Syrian refugees.

Tripoli is already a tinderbox because it is “the poorest city on the Mediterranean,” as Ahmad Fatfatt, a member of parliament from the north, described it. The Sunni area of Bab al-Tabaneh has an illiteracy rate of 30%, he said. The Alawi Jabal Muhsin area has the same socio-economic conditions, which makes both areas fertile ground for recruitment for the different groups vying for influence in Tripoli.

The Arab Spring has also changed the landscape in Lebanon and brought back a sense of empowerment to the Sunni community, especially its Islamist component.

This charged atmosphere has heightened concerns about the Syria crisis spreading. In a recent letter to Lebanese President Michel Suleiman, Saudi King Abdullah expressed concern over the events in Tripoli, which he saw as “targeting one of the main sects of the country.” He called on Suleiman to “disassociate Lebanon from the outside conflicts, especially that of neighboring Syria.”

Suleiman called for the resumption of a national dialogue between the two camps in Lebanon. The parties are scheduled to meet Monday, June 11, but they still have yet to agree on an agenda because Hezbollah insists that its weapons are not on the table. March 14 movement and Sunni leaders see the main threat to Lebanese stability as coming from Hezbollah’s arms and membership in the Syrian-Iranian axis.

Recent statements by General Yahya Safavi, aide to Iran’s supreme leader, warning that Hezbollah has thousands of missiles and will use them against Israel if it strikes further stoked their fears.

Concerns have intensified since Hezbollah leader Hassan Nasrallah, in a televised speech June 1, called for forming “a constituent assembly elected by the people” to discuss “all options,” including the Taef Accords, which ended the 1975-89 civil war, and creating “a new social contract or a non-sectarian system.”

March 14 leaders saw the remarks as an attempt to change the constitution. Fatfatt said the aim was to overturn Lebanon’s current power-sharing formula and “the political balance in the country” which divides power among the three main sects.

Nuhad Mashnouk, a member of parliament from Beirut, said “Nasrallah is practically saying today, 'In exchange for my Hezbollah weapons, I want a new Lebanese constitution.' This will lead to more tension and instability in the country.”

Shiites contend that the current constitution is based on outdated demographics and that they deserve a bigger share consistent with their numbers in the country. The problem is that this claim is hard to verify since the last time Lebanon had a census was in 1932.

Numbers aside, the last time the Lebanese fought over shares of power, it took them 15 years and hundreds of thousands of casualties to agree on a new system. The Shiite community risks making the same mistake committed by the two other major communities in Lebanon, when they believed that through their military power and regional alliances they could elbow others aside.

Lebanon has thrived only when compromise and accommodation guided decisions, and not when its communities tried to overcome each other.

Nasrallah, in his recent speech, expressed support for the Lebanese state. This is his chance to show that he cares more about Lebanon than about his political agenda or regional allies.

Amal Mudallali is a senior scholar at the Woodrow Wilson International Center for Scholars. She has advised the late Lebanese Prime Minister Rafik Hariri and continues in this capacity with former PM Saad Hariri.