Lebanese Sunnis are tapping into deep-rooted feelings of bitterness caused by the suffering of their co-religionists in Syria and directed at the Damascus-backed Lebanese government and Hezbollah. Despite the radicalization, writes Nicholas Blanford, the majority of Sunnis seem unwilling to challenge Hezbollah on the battlefield again anytime soon. 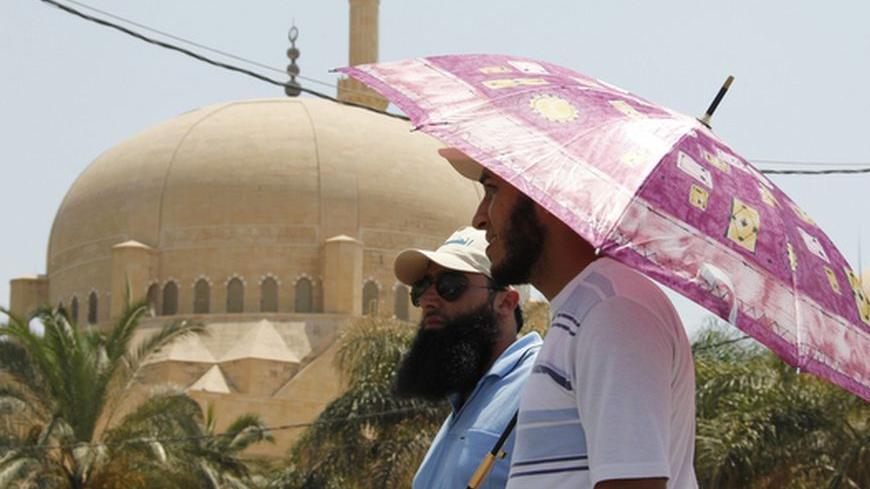 BEIRUT - A "martyr's" portrait of a youthful solemn-faced Ziad Ghalayini gazes down from a two story-tall poster emblazoned across the facade of a small shabby apartment building in a narrow street in Beirut’s Hamra district.

Ziad was just 17 when he was shot dead by a sniper in May 2008 during the brief seizure by Hezbollah and its allies of west Beirut, the takeover being an unprecedented response to the then Lebanese government's decision to shut down Hezbollah's private communications network.

"It was a big disaster for our family," says Hiba Ghalayini, Ziad's mother, with tears trickling down her pale cheeks. "And now I'm worried about my other children if anything else happens."

Ziad was a Sunni and his portrait on the side of his family's building serves as a constant reminder to the local community of what they perceive as past injustice and current disenfranchisement.

From Sidon in the south to the Akkar province in the north, Lebanese Sunnis are tapping into deep-rooted feelings of bitterness, frustration and anger generated by the suffering of their co-religionists in Syria and directed at the Damascus-backed Lebanese government and Hezbollah. Disenchantment with Lebanon's moderate, Sunni leadership in the mainstream Future Movement and resentment at the military and political dominance of Hezbollah has hastened the emergence of new Sunni leaders drawn mainly from the clerical establishment whose fiery discourse and bold rhetoric is striking a chord with the community.

Lebanon's Sunni community, along with the Maronites, were the principle founders of the modern Lebanese state, its early prime ministers drawn from the great Sunni families of Beirut and Tripoli, the Solhs, the Salams and the Karamis. But in the past 30 years, the Sunnis have found their dominance of Lebanon's Islamic communities challenged by the emerging Shiite giant, embodied initially by the Amal Movement under Imam Musa Sadr, and then by Hezbollah.

Many Lebanese Sunnis believe they have suffered a series of blows in the past seven years that has left the community reeling and weakened. First was the assassination in February 2005 of Rafiq Hariri, a former prime minister and iconic Sunni leader. Then isolated street clashes in 2007 and early 2008 further soured relations between Lebanese Sunnis and Shiites. In May 2008, Hezbollah and its political allies stormed west Beirut, scattering with embarrassing ease the so-called "security companies" composed of Sunni recruits employed ostensibly to protect institutions belonging to the Future Movement. Hezbollah's move triggered a week of factional fighting which left more than 100 people dead, including Ziad Ghalayani in Hamra, and brought the country to the brink of civil war.

A year later, it was revealed that Hezbollah may have played a role in the Hariri assassination, augmenting Sunni hostility toward the Shiite party. In June last year, an international tribunal indicted four Hezbollah members for their alleged involvement in the crime.

Then in January 2011, the Hezbollah-led March 8 block toppled the government of Prime Minister Saad Hariri, Rafik's son, through a no-confidence vote in parliament, a move decried by Hariri's supporters as a "coup". The subsequent government, headed by Prime Minister Najib Mikati, is composed mainly of March 8 figures.

Critically, however, Hariri has remained out of the country since April last year for reasons that are not altogether clear, although his staff cite security concerns. Although Hariri continues to communicate to his followers, it is through the medium of television and Twitter which only highlights his physical distance from Lebanon.

Hariri's prolonged absence — combined with a weakening of his financial patronage network — has disillusioned his supporters and effectively left a vacuum at the level of moderate Sunni leadership. Miqati, although a generally neutral political figure, has earned the resentment of Hariri supporters for accepting the premiership of a government in which Hezbollah is the dominant influence.

"We as Sunnis are lost," an elderly resident of the Sunni-populated Beirut neighborhood of Tariq Jdeide observed ruefully. "We have a terrible prime minister now who is making the Sunni street weak. When Saeb Salam [who served four terms as prime minister between 1952 and 1973] was in power, we had everything."

Lebanon's other communities — Christian, Shia, Druze — have leaders that are able to exert control over their followers to a greater or lesser degree. But the element of moderate command and control is generally absent in the Sunni community. Instead, the leadership vacuum is being filled by new figures emerging from the Sunni street. Among the most influential is Sheikh Ahmad Assir, the imam of the Bilal bin Rabah mosque in Sidon. In the past year, he has gone from being a local preacher in Sidon with a small but devoted following to a national figure, delivering speeches in central Beirut and Tripoli, appearing on television interviews and boldly criticizing Hezbollah and Amal. In an interview on Lebanon's Al-Jadeed television on June 23, Assir accused Hezbollah of using its political weight to dominate Lebanon and isolate the Sunni community, charging that the Shia party's arms were no longer intended for resistance against Israel but to subjugate Lebanon to its will.

"Either we live as equal partners or else, I swear by God, O Hassan Nasrallah and Nabih Berri, I, Ahmad Assir, will shed every drop of my blood to prevent you from relaxing until balance is restored to Lebanon," he said.

Such direct and heated rhetoric toward Nasrallah is unusual in Lebanon and has helped raise Assir’s profile among many of those Sunnis who resent Hezbollah’s power, including those that do not necessarily subscribe to the cleric’s Salafist ideology.

“He is a brave man and he says what we are all thinking,” says Mohammed Yamout, 21, from Tariq Jdeide.

In an apparent response to Assir's outburst, Al-Jadeed's offices were fire-bombed two nights later and after one of the alleged perpetrators were arrested, his supporters blockaded streets with burning tires to demand his release.

Meanwhile, an undaunted Assir has launched an open-ended sit-in in Sidon to demand an end to the "spread of [non-state] arms," essentially a reference to Hezbollah's military arsenal.

There is evidence too of a growing militarization of the Sunni community, especially in the poorer communities in Tripoli and the rural north, fueled by the deepening conflict in Syria.

In the northern Bekaa Valley, where the authority of the Lebanese state is weak, Sunni volunteers for the armed struggle against the Assad regime are receiving training in basic weapons handling at ad hoc locations.

The sprawling village of Arsal in north east Lebanon has become the nexus of Lebanese Sunni support for the Syrian rebels, housing refugees and using its proximity to the border to facilitate the transfer of weapons and militants. Some 300 volunteers from the northern Bekaa alone have joined the armed opposition in Syria, according to Mustapha, a Sunni from the area who helps train some recruits. Khaled, one of those Lebanese volunteers who is presently deployed in Homs, described the struggle in Syria as a "jihad" and saw the confrontation in stark sectarian terms, echoing widely held views among the more radical elements in Lebanese Sunni society.

Despite persistent rumors that weapons are being smuggled into Lebanon and distributed to Sunni groups, there is little hard evidence of that on the ground. Most of the combatants in the recent clashes between rival Sunni and Alawite factions in Tripoli were armed with a motley collection of rifles, some dating back to the 1940s. The price of arms on the black market has skyrocketed over the past 15 months with demand driven almost exclusively by Syria.

Until a few weeks ago, a good quality Russian AK-47 rifle cost around $2,200, double the price from March last year. The cost of Rocket-Propelled grenades soared from $100 each in March 2011 to nearly a $1,000. Just lately, however, the prices of AK-47s and RPGs had dropped slightly, apparently reflecting a greater supply of such weapons in Syria. The prices of other weapons — including US-made assault rifles, heavy machine guns, automatic pistols and ammunition continue to climb.

While the militarization of some Sunni areas of the north is driven largely by proximity to the border with Syria and close contact with Syrian refugees and opposition combatants, there is little evidence that Beirut’s Sunnis are preparing a call to arms. The Sunni community in Beirut is traditionally more affluent and less radical that its counterparts in the north and Bekaa Valley.

Still, isolated clashes between Shiites and Sunnis, especially in mixed or adjacent neighborhoods, are widely expected in the weeks and months ahead as a consequence of the worsening violence in Syria. However, Hezbollah’s principle concern is safeguarding against large-scale car bomb attacks, the hallmark of Salafi jihadists which have blighted Iraq since 2003 and seem to have made an appearance in Syria in the past year.

In Beirut, the anger and frustration felt by many Sunnis is tempered by a sense of hopelessness in confronting Hezbollah’s dominance. Hajj Khodr Ghalayini, the imam of the Shatila mosque, admitted that his constituents in Hamra often talk about leaving the country.

“It’s getting very hard to live here, it’s hard for Sunnis to get jobs now. The Shiites have taken over everything,” he said.  “We used to be with the Future Movement but, after the attack in May 2008, we saw they could not defend us because [Hezbollah] is a superpower. Let’s face reality, we can’t fight them.”

Nicholas Blanford is Beirut correspondent for the Christian Science Monitor and the Times of London and author of "Warriors of God: Inside Hezbollah's Thirty-Year Struggle Against Israel."