While the Lebanese army has successfully booted Sheikh Ahmad al-Assir from the city of Sidon, the popular divide that allowed for his movement's growth persists. 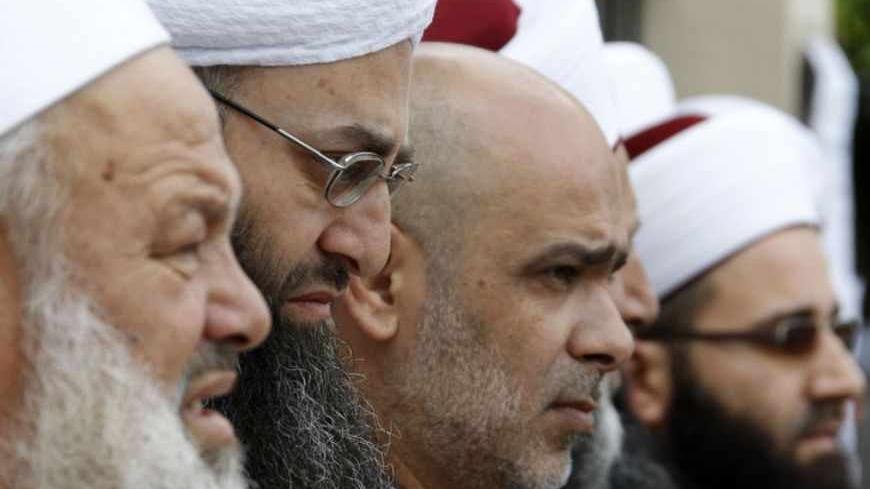 Sunni Muslim Salafist leader Ahmad al-Assir (2nd L) and other sheikhs take part in a sit-in in Sidon, southern Lebanon, against the killing of Sheikh Ahmad Abdul Wahid, a Sunni Muslim cleric, and Muhammed Hussein Miraib, both members of the March 14 political alliance, May 21, 2012. - REUTERS/Ali Hashisho

The phenomenon of Sheikh Ahmad al-Assir emerged in the Lebanese town of Abra, east of Sidon. During the civil war, Christian residents deserted the town only to return and find that its demographic — and even geographic — landmarks had changed. The Assir “phenomenon” emerged out of a Sunni desire to stand up against what they considered bullying by the Shiite Hezbollah. It is worth mentioning that Hezbollah kept its arms after the end of the civil war under the pretext that they are used to resist Israel.

Following Israel’s withdrawal from Lebanon in 2000, Hezbollah still retained its weapons. The Syrian military’s influence at the time, as well as disputed pieces of land such as Shebaa Farms and Kfar Shuba Hills, forced Lebanese parties to accept these weapons.

It was also argued that Hezbollah's military wing, the “Islamic Resistance,” could defend Lebanon in the face of an Israeli attack. Following the assassination of Lebanon's former prime minister Rafik Hariri in 2005 — and amid mounting suspicion about Hezbollah’s role in the murder, based on the indictment issued by the Special Tribunal for Lebanon — resentment toward Hezbollah’s arms increased. The March 14 coalition, which is anti-Hezbollah, was unable to confront the party on May 7, 2008, when Hezbollah militants dominated large parts of Beirut and fought battles in the mountains with the Druze supporters of Progressive Socialist Party leader Walid Jumblatt. This led the latter to withdraw from the March 14 coalition, and announce a truce with Hezbollah.

Hezbollah accused the Future Movement — and the March 14 Coalition in general — of treason following the 2006 July War and the year-long siege Hezbollah laid on then-Prime Minister Fouad Siniora at the Serail. These events pushed some Sunnis to harbor hatred as they were left to face the dominance of Hezbollah’s arms.

Former Prime Minister Saad Hariri has been out of the country for more than two years due to security reasons, according to his circles. Amid his absence, the influence of religious groups advocating the principle that “arms must only be faced by arms” grew.

The outbreak of the Syrian revolution in March 2011, and successive news about the clashes turning into a sectarian war in which Hezbollah is publicly involved, further incited Lebanese Sunnis. Thus, the controversial speeches of Assir began receiving more public attention.

Assir has been provoking Hezbollah for months, tarnishing the image of its secretary-general, Hassan Nasrallah, who is seen by his supporters as a divine leader. Assir continued to instigate Hezbollah in the media, sometimes in a ridiculous fashion. He appeared on television sporting a white robe, driving his motorcycle to an anti-Hezbollah sit-in on Sidon's main road. When he went skiing with his supporters in the Christian-majority area of Keserwan, the controversy was such that political authorities got involved.

Sunnis, Christians and Druze thought Assir and his supporters were nothing more than a media phenomenon, albeit embarrassing at times for the Future Movement. The movement’s secretary-general, Ahmad Hariri, publicly attacked and criticized Assir, as did Beirut MP Nouhad al-Machnouk on several occasions. Yet Assir’s speeches were well received by many Sunnis, and the Future Movement was blamed by its popular base for not supporting Assir.

Perhaps the Future Movement’s true position regarding Assir is evidenced by an incident reported to Al-Monitor by a political figure. The incident occurred during the memorial service of Wissam al-Hassan, the former head of the Internal Security Forces’ information branch, who was assassinated by a car bomb in Beirut last October. Assir arrived at the burial site, the Mohammad al-Amin Mosque, in downtown Beirut hoping to join March 14 leaders at the podium. However, he was immediately blocked by the Future Movement-affiliated organizers and security supervisors. A fight almost broke out. Nader Hariri told Assir, “If you want to participate you can enter the mosque without approaching the podium, but if you do not want to enter the mosque then you can leave.” Assir then entered the mosque for a few minutes before departing.

A March 14 official told Al-Monitor, “We do not really disagree with Assir on objectives. We agree with him on the demand to prevent any party from keeping and possessing arms. Yet we disagree over two key points. On the one hand he believes that arms must only be faced with arms. We are totally against this idea and we insist on maintaining peaceful democratic methods. On the other hand, Assir believes that facing Hezbollah’s aspirations and objectives is based on sectarian and religious grounds, while we insist that the responsibility is a comprehensive national responsibility.”

Days before the Assir “phenomenon” was wiped out, Sidon's merchants and residents were in state of panic as Assir threatened to destroy apartments used by Hezbollah. The aim of Assir's move was aimed at taking over his opponents who are fighting him under the guise Saraya al-Moqawama. This organization is made up of unofficial military forces that operate under Hezbollah’s directives.

The city’s merchants had repeatedly expressed their irritation at Assir's sit-ins and marches, which consistently provoked tensions in the sheikh's bid to confront the Shiite party. On the other hand, Assir raised the ire of Hezbollah as he repeatedly tarnished Nasrallah's image, saying that the party’s objectives fall within the scope of Iran’s leadership, command and ambitions.

Over the past few weeks, the media have taken accelerated steps to characterize Assir and his group as diabolical, even accusing them of terrorism. Within the scope of this campaign, a video was broadcast in which Assir appears to accuse Christians of apostasy. Following several warnings issued by the Lebanese Army Command, Assir did not stop his movements. This eventually led to a clash at an army checkpoint in Abra between one of his bodyguards and the soldiers, causing the death of two officers and one soldier.

The bloody confrontation soon expanded. The army was no longer able to retreat. The ensuing military operation gained the support of the Future Movement, March 14 and all Lebanese people, despite their divide over Hezbollah’s arms and its role in Lebanon and Syria. This divide continues to paralyze the country, promising many more difficult days in the future.