Sheikh Ahmad al-Assir recently journeyed to the Lebanese resort of Faraya to go skiing in a public-relations effort to depict himself as part of a new generation of Salafist leaders and to broaden his base of support, writes Nasser Chararah. 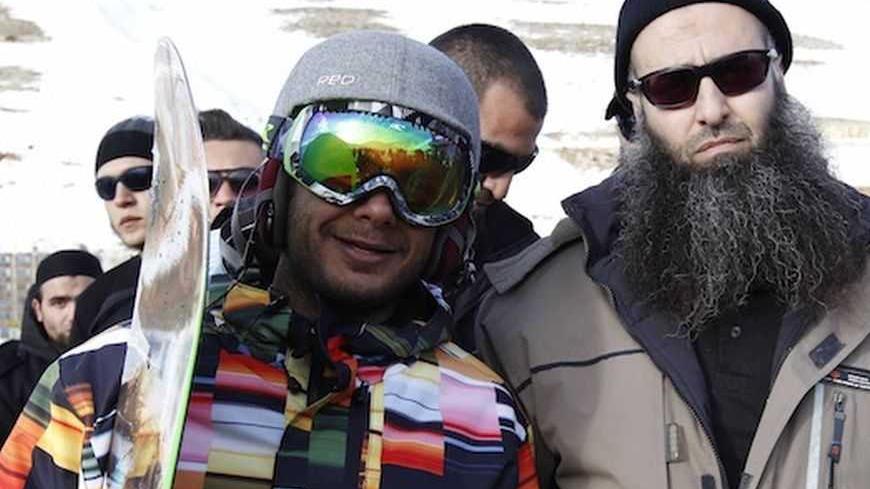 Ahmad al-Assir, the Lebanese Salafist sheikh, suddenly decided to go skiing in Faraya last week. This decision was surprising given that Salafist sheikhs are very conservative in their personal lives. These sheikhs consider many common activities to be bid'ah (habits or ideas that are heretical) and try to avoid them.

In Islam's history, it's safe to say that Assir is the first Salafist sheikh to head to the snow summits for skiing. One could bet on the fact that other things distinguish Assir from all other Salafist sheikhs. For example, last year Assir traveled from his stronghold in a suburb of Sidon in southern Lebanon to Beirut — along with dozens of his supporters — to hold a political demonstration. His demands included, first and foremost, that Hezbollah surrender its weapons to the Lebanese state.

During this demonstration, standing to Assir's left on the main platform was the Salafist sheikh Omar Bakr Fustuq. Fustuq is described as being an Islamic extremist. For example, he is opposed to voting in parliamentary elections because he believes that God alone has the right to legislate. Standing to Assir's right was Fadel Shaker, a musician who is well-known in Beirut's nightclubs. It was like a movie scene by a filmmaker who likes to combine contradictions that are linked only by fantasy.

Most likely, however, this scene relates to Assir's own psychological background. His father, Mohammed Halal al-Assir — "before repenting to God" — was an Oud performer who played at evening gatherings. Perhaps Assir wanted to emulate the story of his father, who moved from singing to radical beliefs, by making Shaker a part of his dramatic tale.

Here he combined art, which the Salafists repudiate, with the Salafists' religious message. Salafists want to follow a behavioral model set by companions of the Prophet Muhammad nearly 1,400 years ago. According to a psychologist at the American University Hospital in Beirut, Assir wants to deliver the message that a person can be an artist and a Salafist sheikh at the same time — at least after repenting. He added that this is akin to an inverse Oedipus complex, where the son (Assir) is trying to find justification for his father, rather than kill him.

There is, however, another aspect to the relationship between Assir and Shaker — a factor that could be even stronger than the aforementioned personal factor. Shaker essentially plays the role of finance manager for Assir's religious campaign. Thanks to Shaker’s efforts to raise funds, Assir has become wealthy, even though a few years ago he was poor. According to business records, he owned a villa in the town of Shawaliq (near Sidon) that cost $700,000 to build before he sold it to Christian villagers last week. He also owns a supermarket and a mobile phone shop in the town of Abra, neighboring Sidon, and recently purchased real estate in other parts of Lebanon.

Wealthy residents in his hometown support his sectarian cause, but Shaker is unique. Shaker has facilitated relationships between Assir and Gulf sheikhs and emirs, including high-ranking government officials. The latter promote the Salafist cause in the Muslim world and support fundamentalist Sunni environments that oppose Shiite Islamic forces.

This is Assir’s present role: He claims to seek a Sunni revival by raising up their voices in the face of the bipartisan Shiite alliance between Hezbollah’s Hassan Nasrallah and Speaker of Parliament Nabih Berri. A few months ago, Assir hurled threats at the Shiite leaders in a theatrical display, saying that the day will come when he will make Berri and Nasrallah scared to sleep in their own homes.

Before 2008, Assir never touched on politics in his Friday sermons at the Balal bin Rabah Mosque in Saida. He led communal prayers before a humble crowd of a few worshippers who were taken by his preaching style. Today his congregation numbers in the thousands.

At some point, he changed from a run-of-the-mill man of faith, like thousands of others in the Muslim world, into a head-turning sheikh. This shift occurred after Hezbollah took control of Beirut and kicked out militias affiliated with the Future Movement — the biggest Sunni movement in Lebanon, led by former Lebanese Prime Minister Saad Hariri. Since that time, Assir has nurtured his following and instilled bitterness in their hearts. In response to accusations of cowardice from the civil Sunni leadership, he has amped up efforts to garner strong support. This explains why he includes “sectarian rhetoric” in his speeches.

Assir’s story is tied to the rise of a Salafist climate throughout the region, fueled by the sudden increase in the Islamist movement's role during the Arab Spring. Since Salafism is a broad and general movement without an organized party, it produces various internal manifestations. Assir is among these manifestations, and he differs in the way that he expresses himself.

Assir’s entrance into the Lebanese political scene was sudden. The secret behind his expanding popularity among Lebanese Sunnis — according to Lebanese intelligence agencies — lies in his role as an “explosive voice” echoing what they say themselves. It is important to acknowledge that Assir does not offer profound insights into the interests of Sunnis in Lebanon. He represents a psychological “lifeline” in their eyes. But at the same time, he threatens their way of life and exposes their personal interests to danger. That happened when he staged a sit-in on a major highway in Saida last year for several months in order to stop the flow of Hezbollah arms. As a result, what was once a commercial town with a Sunni majority that enjoyed strong trade relations with its Shiite neighbors turned into a remote village suffering from enormous financial loss. The town’s population subsequently resorted to efforts to end the sit-in.

In short, Assir is a model for one of the current Salafist movement’s many faces in the region. The nature of his work has distinguished him from other, more traditional strains of conservative Salafism, leading other Salafists to disassociate him from the movement. He represents a new generation of Salafist efforts that does not promote its own platform or status, instead engaging in activities that resemble a circus performer that draws attention and praise for his “clownery” — even if only for a few moments.

In a short period of time, Assir has shown that he has other tricks up his sleeves. This is evidenced by the longevity of the media attention he has received, last seen when he went skiing at the Faraya resort to appeal to Lebanese youth who are generally open to indulging in the pleasures of life.