Amid the speculation, public resentment and mixed views that have been surrounding the case of Fadel Shaker, will the former singer, now militant, manage to find a way out? 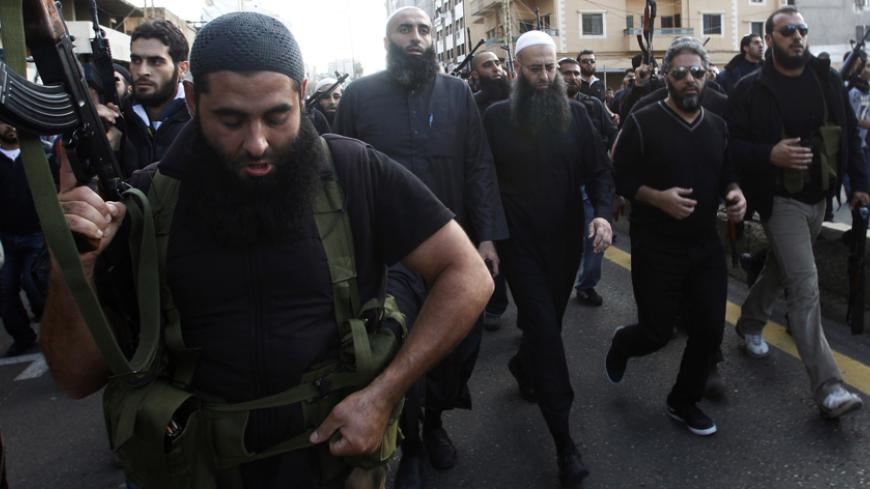 It was Fadel Shaker who preoccupied the minds of the Lebanese throughout the month of March. His real name is Abdul Rahman Shamandar, born in Sidon and holder of both the Lebanese and Palestinian nationalities. Since 1998, Shaker has been tremendously famous in Lebanon as a singer with a distinguished warm voice performing romantic melodies.

He garnered great fame both on the Lebanese and Arab artistic scenes, until he announced his retirement in 2012 to join the faction of fugitive Lebanese Sheikh Ahmad al-Assir. Assir perpetrated attacks against the Lebanese army in the town of Abra, on Sidon’s outskirts, in 2013, leading to clashes that left the Lebanese army with 18 dead and 150 wounded soldiers, prior to Assir’s movement being completely eliminated.

The Abra battle ended with Assir and Shaker escaping and vanishing from sight, though it was later determined that they were hiding in the Ain al-Hilweh Palestinian refugee camp. They and other participants in the fighting remain at the camp — despite facing the death penalty on charges of assaulting the Lebanese army, killing and attempting to kill dozens of soldiers and inciting sectarian strife — with other wanted and indicted fugitives. For the time being, Lebanese authorities cannot enter the camp and arrest these fugitives, as the Ain al-Hilweh camp is subject to the influence of the Palestinian forces present there. As for the Lebanese soldiers, they are deployed only at the camp entrances, amid the absence of an inclusive political decision to use military intervention and enter the camp, due to political and sectarian divisions characteristic of Lebanon.

Shaker has appeared more than once in YouTube videos opposing the army and boasting about killing Lebanese soldiers, and one video in particular where he referred to two dead soldiers killed like “meaningless bugs" stands out. He resurfaced suddenly in an interview with Lebanon’s LBCI TV channel on March 7, from his place of residence inside the camp, in his first such interview since his retirement as a singer and the Abra incidents.

He appeared devoid of the Salafist garb that he had been sporting since converging with Assir, in what seemed to be an attempt to announce his repentance of religious hard-line thought and his desire to return to “normal life.” He also affirmed splitting from Assir and claimed his innocence with regard to targeting the Lebanese army camp.

This appearance coincided with rumors spread by the media about a deal in the works, allowing Shaker to surrender to security agencies in return for a reduced sentence, rumors that led the army command to issue a communique, signed by the Lebanese army Directorate of Orientation, stating that it was “not a party to any such deal, and that any settlement of the fugitive’s case would have to entail him surrendering, being questioned and referred to the competent courts in preparation for the latter issuing the appropriate ruling in his regard.”

Furthermore, talk about a “deal” drove the families of army martyrs to organize a sit-in in downtown Beirut on March 15, rejecting any settlement that may come at the expense of their sons’ lives.

In this regard, security sources told Al-Monitor that a settlement was in the works for Shaker and other fugitives but that the settlement had failed to materialize. The sources revealed that, subsequent to his escape, Shaker first attempted to contact the Lebanese army command in August 2014, through a mediator whose identity the sources preferred to keep a secret.

At that time, the mediator proposed a settlement based on Shaker surrendering in return for a reduced sentence; a proposal rejected by the army command, which told the mediator that the issue was in the hands of the judiciary.

Shaker has since employed various mediation efforts to promote an atmosphere conducive to the settlement of his legal standing. The first step toward that goal was to secure the support of Sidon’s member of parliament, Bahia Hariri — the aunt of former Prime Minister Saad Hariri, against whom Shaker and Assir had launched numerous verbal attacks, particularly after the Abra incidents — and subsequently to Saad Hariri stating his stance against them and saluting army Cmdr. Gen. Jean Kahwaji.

The same security sources further affirmed that Shaker won Bahia Hariri’s favor, otherwise the settlement attempt would have been stillborn. In addition, the sources claimed that the second line of communication toward reaching a settlement passed through Prince Al-Waleed bin Talal, the owner of Shaker’s record label, Rotana Production Company. This is evidenced by one of Rotana’s executives announcing, in parallel with the rumors about settling Shaker’s current legal status, that Shaker was among the stars who “would always be welcomed at Rotana,” in an interview with Al Rai newspaper.

Former minister and vice president of the Alwaleed bin Talal Humanitarian Foundation in Lebanon, Leila el-Solh Hamadeh, represented the prince, but was met with the same response by the army command (that the matter is now in the hands of the judiciary) as the first mediator. She thus sought the help of Minister of Interior Nouhad Machnouk, who showed no interest in the matter for fear that it would destroy his political career, according to the security sources.

In taking up the matter, Minister of Justice Ashraf Rifi attempted to thin out the accusations against Shaker, making it appear as if his arrest and trial were not even necessary, and limit the charges against him to belonging to an armed group, religious incitement and offending religious symbols — instead of terrorism, fighting the army and causing the death of soldiers.

In this context, the sources indicated that Shaker sent yet another mediator, his son this time, to meet with the army command at the beginning of March, and propose surrendering. The command’s response, however, was the same.

According to the same source, preparations toward reaching a settlement leading to surrender required Shaker to announce ending his relationship with Assir and denying participating in any military or security operations against the army, as well as reverting back to his artistic appearance, proclaiming his desire to return to normal life and disavowing all offensive and inflammatory rhetoric he had previously published on social networking sites, by claiming that those statements and accounts were falsified and did not belong to him.

“Here started the role played by the LBCI TV channel, which endeavored to mollify the situation,” according to our sources. In this regard, the Shaker dossier created an opportunity for LBCI’s chairman, Pierre Daher, and bin Talal to repair their relationship, which reached crisis level as a result of a financial dispute between the two, going back to 2012, over their partnership in the production company that produced most of LBC’s programming.

LBCI’s declining profits, like all other Lebanese TV stations, and bin Talal’s desire to reduce the intensity of the channel’s attack against him since his dispute with Daher began, led to their interests converging to achieve two common goals: provide a venue for Shaker to appear and revive cooperation between them to help solve the company’s financial crisis. It is worth noting that LBC’s Daher is currently spearheading an initiative to consolidate the efforts of Lebanese channels to cut down on expenses and limit yearly financial losses.

Al-Monitor’s sources affirmed that this deal was scrapped, at least for the foreseeable future, for two main reasons. First, the associated cost demanded by the other political faction in the country, namely the acquittal of Ali Eid — leader of the Lebanese Arab Democratic Party whose whereabouts have been unknown since the launching of the Tripoli security plan in April 2014, of charges that he was involved in the Tripoli twin mosque bombings of August 2014 — and the acquittal of former Minister Michel Samaha, known to be close with the Syrian regime and affiliated with the March 8 alliance, of charges that he smuggled explosives from Syria to Lebanon — demands that were rejected by the March 14 alliance and especially the Future Movement. The second factor that killed the deal was the overwhelming public outcry against such a settlement, as expressed on social networking sites, through demonstrations organized by families of martyred soldiers, as well as media campaigns criticizing the parties involved therein.