Ain al-Hilweh, the largest Palestinian refugee camp in Lebanon, is a safe haven for fugitives and militants, while the Lebanese state is moving to extend its mandate over the Sidon area and improve the security situation. 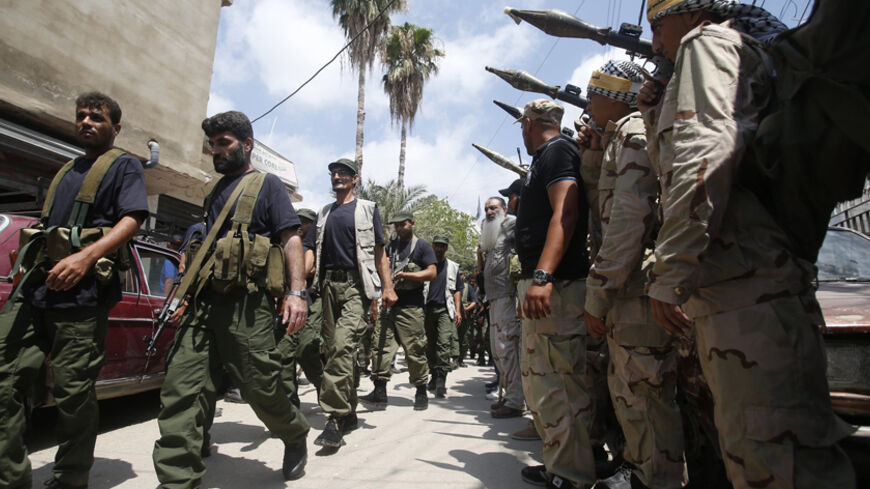 Palestinian gunmen hold their weapons as they walk during the launch of a joint security force that includes all Palestinian factions, to maintain stability at the Ain al-Hilweh Palestinian refugee camp near the port city of Sidon, southern Lebanon, July 8, 2014. - REUTERS/Ali Hashisho

BEIRUT — The presence of Palestinians has always been a weighty factor in the Lebanese situation. It moves to the forefront with every security disturbance, particularly those in Ain al-Hilweh refugee camp. Ain al-Hilweh has become synonymous with being a place for fugitives and terrorists. Following the events in Abra in June 2013, it was believed that wanted terrorists Ahmad al-Assir and Fadel Shaker sought shelter here. Following the recent battles in Tripoli, the same accusation has surfaced in regard to fugitive Shadi Mawlawi.

Lebanese Minister of Interior and Municipalities Nouhad al-Machnouk said in a TV interview, “It is no longer acceptable that the camp remains a hotbed where fugitives flee from justice.”

Informed security sources told Al-Monitor that the investigations into the cases of wanted and arrested terror suspects showed that a number of those classified as "very dangerous" had spent some time in Ain al-Hilweh, while others are affiliated with al-Qaeda, the Abdullah Azzam Brigades, Jabhat al-Nusra or the Islamic State (IS). Two men who infiltrated Ain al-Hilweh refugee camp, for instance, were Palestinian detainee Naim Abbas, who was arrested in February on charges of rigging cars with explosives and recruiting suicide bombers and who was No. 4 on the Lebanese security services' list of most wanted fugitives, and detainee Ahmad Mikati, who was planning to carry out a major terrorist attack when he was arrested in October after he pledged allegiance to IS and formed IS-linked terror cells in the north of Lebanon.

The sources said that Ain al-Hilweh has been associated with a number of security incidents in Sidon and other areas. The first time was in 1999 when the perpetrators of the assassination of four judges in the Palace of Justice in Sidon fled to the camp. At the time, the Palestinian forces failed to hand them over despite the security services identifying them.

The Palestinian presence in Lebanon is subject to the Cairo Agreement of 1969, which was signed between the Lebanese and Palestinian sides and allowed for Palestinian self-security and the use of all available means to restore their occupied territory, including military operations. However, the Palestinians have conducted security acts throughout Lebanon under the pretext of their struggle and liberation, which has led to clashes. Subsequently, they participated in the Lebanese civil war that started in 1975.

There was more than one attempt to control the Palestinian weapons in Lebanon, but to no avail. The first attempt took place at the end of the civil war with the 1989 Taif Agreement. One of the agreement's articles stated the need for the Lebanese state to exert its authority over the entire Lebanese territory and to dissolve and disarm all militias. This was also affirmed by the Lebanese dialogue sessions that began in 2006. The dialogue aimed at addressing issues ranging from Lebanese-Syrian relations to the disputed border region of the Shebaa Farms, Palestinian weapons in Lebanon and the national defense strategy related to Hezbollah’s weapons. Also discussed was the status of then-President Emile Lahoud — following Rafik Hariri's assassination, the March 14 coalition launched the "Leave" campaign against Lahoud in which he was urged to quit — and the establishment of the Special Tribunal for Lebanon to investigate the assassination of former Prime Minister Rafik Hariri.

Nevertheless, these decisions have not been implemented due to the political and sectarian divisions in Lebanon and numerous regional factors, which have hampered the use of a military solution to address the situation of Ain al-Hilweh being a refuge for wanted individuals. Until now, a military option has been costly, unlikely and its results not guaranteed, according to the security sources. They said that the lack of state power worsens the security situation in Ain al-Hilweh, which contributes to its transformation into a hotbed that harbors fugitives who consider it a safe haven out of reach from the Lebanese security services.

The same sources said that the latest official figures available to the security services date back to 2012 and indicate the following:

Nevertheless, the number of fighters (data not available after 2012) have in all likelihood increased with the developments of the Syrian civil war and the growing influx of Palestinian refugees from Syria to Lebanon who seek refuge in the Palestinian refugee camps there. Around 455,000 refugees in Lebanon are registered with the United Nations Relief and Works Agency for Palestine Refugees in the Near East, but according to unofficial figures, the total number of refugees is closer to 500,000.

Based on the military presence, each of the parties has taken control of a part of Ain al-Hilweh refugee camp, having established a security base in conjunction with the ongoing political divides between the factions and disputes over influence and power. These divisions are reflected in the ongoing bloody confrontations and tensions such as assassinations, clashes and grenade attacks.

Meetings are often held between the Lebanese side and the Palestinian factions to coordinate and ensure that the situation is under control. The most recent meeting was held between the army intelligence chief in the south, Gen. Ali Shahrour, and the Palestinian factions, after Shadi Mawlawi fled to the camp, where he demanded them to assume responsibility, knowing that the Lebanese authorities repeated their calls to hand over those wanted, but without any Palestinian response. The security sources asked whether the leadership of the factions is able to arrest and transport wanted individuals outside the camp, and if it is capable of containing the expected repression by radical groups inside and outside the camp. The sources recalled, in this context, the step taken by the Palestinian forces in 2002 when they handed over Abu Obdeida, who was wanted for killing three Lebanese soldiers in a raid carried out by the army near the camp, to the Lebanese authorities.

On July 7, efforts resulted in the establishment of a "joint Palestinian security force." This force is tasked with restoring the security situation throughout the camp, halt the assassinations and prosecute security violators. It enjoys comprehensive cover from the various Palestinian factions as well as extensive Lebanese political support, and it fully coordinates with the Lebanese army. Yet, the success of this force will depend on the current developments.

All these factors mean that Ain al-Hilweh can explode at any moment and ignite the Lebanese internal scene. It can also be controlled under the Lebanese law and made to coordinate with the Lebanese infrastructure to preserve its stability and become an actual refugee camp for Palestinian refugees rather than a hotbed, as is the case at present.