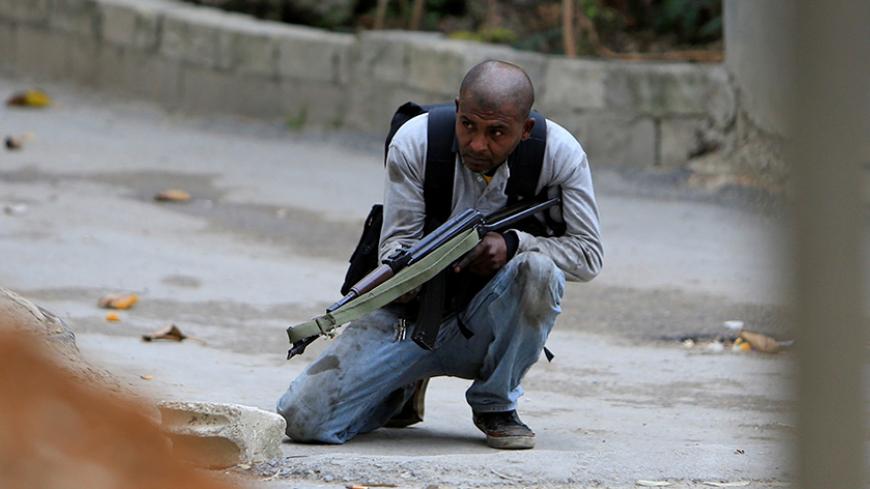 Calm has returned to Ain al-Hilweh Palestinian refugee camp in Lebanon. Violent clashes between Fatah and Islamist militants from the Bilal Badr group broke out Feb. 23 and then climaxed Feb. 28, resulting in the death of a young man and the wounding of four others, including a child.

The clashes are not new to Ain al-Hilweh, which is the largest Palestinian refugee camp in Lebanon, in population and in size, accommodating more than 120,000 residents, among them 54,116 refugees registered with the United Nations Relief and Works Agency for Palestine Refugees in the Near East.

Many non-Palestinian militants reside in the camp, including individuals affiliated with the Bilal Badr group, and Lebanese fugitives wanted by Lebanese security forces. The PLO factions (Fatah, the Popular Front for the Liberation of Palestine and the Democratic Front for the Liberation of Palestine) have called for these fugitives to leave the camp immediately, accusing them of attempting to entangle the camp in regional conflicts and turn it into a base for armed militants.

On March 2, Fatah representative Fathi Abu al-Ardat said the Palestinian national forces in the camp will see the wanted fugitives out and hand them over to Lebanese authorities.

The PLO factions have sought to get rid of these militants but to no avail. Fatah forces have previously clashed with these militant groups and are fully aware of the threat they pose to the camp. This threat has intensified with the occurrence of occasional assassinations and with the increase in these groups' sizes, which may further destabilize the camp and Lebanon. In April 2016, Fatah official Fathi Zeidan was assassinated in the nearby Mieh Mieh camp.

The renewed talk of the dangers posed by the fugitives in Ain al-Hilweh coincides with Lebanese authorities' decision to build a concrete wall around the camp, a plan that authorities had seemingly abandoned in November.

Last year's initial plan to build a wall aimed to prevent the infiltration of militants into the camp after Lebanese security forces arrested an Islamic State official in Ain al-Hilweh in September.

Following a meeting of Palestinian factions — including Islamist, nationalist and those affiliated with the PLO — at the Palestinian Embassy in Beirut on Feb. 28, an agreement produced a cease-fire later that day as well as a plan to re-form a joint Palestinian security force among the factions.

The armed clashes in the camp coincided with the Feb. 23 visit of Palestinian President Mahmoud Abbas to Lebanon, during which he met Lebanese officials and political parties.

During a Feb. 23 news conference with his Lebanese counterpart Michel Aoun, Abbas said that his meetings in Lebanon focused on the security issues in the camps. “Our people in Lebanon have confirmed that they will preserve security and stability in the camps,” he said.

Fatah Central Committee member Azzam al-Ahmad, who accompanied Abbas to Lebanon, told Al-Monitor, “The Palestinian delegation mainly discussed during its visit to Lebanon how to improve the security situation in the camps. This issue was given paramount attention.”

“All Lebanese political forces spoke positively about the need to improve the living conditions of refugees — but after resolving the security crisis, especially [since] suspicious groups tried to blow up the situation during President Abbas’ visit to Lebanon,” he said. "What is going on in the camp are mere attempts by some suspicious groups to drag the camp, which they have taken as a stronghold, into a furnace of struggle that we as Palestinians refuse.”

In a Feb. 23 press statement, Ahmad said, “We absolutely have no objection if the Lebanese army decides to extend its security authority over any Palestinian refugee camp.”

Yet the Lebanese army is prohibited from entering the Palestinian refugee camps. Under the 1969 Cairo Agreement, signed by the PLO and Lebanon, security forces affiliated with the Palestinian factions are responsible for security inside the camps.

Palestinians in the camps are now more afraid than ever that the security situation in Ain al-Hilweh will blow up, given the growing presence of armed militants of different nationalities who are affiliated with radical Islamist organizations such as al-Qaeda and Jabhat Fatah al-Sham.

They fear there will be a repeat of the tragedy of north Lebanon's Nahr al-Bared camp, where, from May to September 2007, armed clashes broke out between the Lebanese army and Fatah al-Islam militants, destroying the camp and displacing its residents.

Palestinians in Ain al-Hilweh fear that the clashes between the Palestinian factions and the militant groups will spiral out of control and destroy the camp.

Palestinian Ambassador to Lebanon Ashraf Dabbour told Al-Monitor, “President Abbas’ visit to Lebanon complements his previous visit in 2013, when he summed up the Palestinian policy [in Lebanon] by stressing that the refugee camps will not be a thorn in the side of Lebanese security and will dissociate themselves from any internal conflict.”

Dabbour said that to further consolidate this policy, the Palestinian factions agreed to a security plan Feb. 28 to set the foundations for a new phase in Ain al-Hilweh. “This would be based on controlling security in the camp, averting any potential bickering and thwarting any attempts to escalate, provided that the factions develop the appropriate implementation mechanisms,” he said.

“This is why the Palestinian factions in Lebanon urged [on March 1] all non-Palestinian wanted fugitives to leave Ain al-Hilweh refugee camp,” he said. “This shows the factions’ keenness to maintain security stability in all camps and support the security stability and civil peace in Lebanon. The factions will not allow the use of the camps, especially Ain al-Hilweh, as a gateway to mess with the security of Lebanon and the Lebanese people.”

Dabbour denied news reports that the Lebanese state has passed along to Abbas a list of wanted persons residing in Ain al-Hilweh camp to be turned over to authorities.

“Cooperation is at the highest levels between the states of Palestine and Lebanon, and this was crystallized through a meeting with Lebanese officials and leaders of the Lebanese political parties," he said. "No list was handed to President Abbas and no demands were made."

Although the central focus of the Lebanese-Palestinian meetings was the issue of security, officials also discussed the harsh living conditions in Lebanon’s camps. Dabbour said, “There are attempts to draw up understandings with the Lebanese authorities to bring out the Palestinians from the state of misery and deprivation in terms of standard of living and at the economic level." Dabbour didn't provide further details on these "understandings" or whether they would be announced publicly.

Regardless of the recent armed clashes in the camp, Abbas’ visit will likely contribute to instilling calm and stability in the camps.

The Palestinian delegation told Lebanese authorities that Palestinians are committed to coordinate and cooperate with them to reach a unified stance.

Sultan Abu al-Einein, a former secretary of the PLO factions in Lebanon, told Al-Monitor, “We can avert any explosion of the security situation in the camp. Militants must understand that there is a Palestinian consensus to confront them and mop them up from the camp for good.”

“When [all] Palestinian political forces take a decisive stance against these militants, they will no longer find a favorable environment in the camp. This will take place in coordination with the Lebanese authorities,” he added.

Despite the cautious calm in the camp, the situation could explode at any given moment. Palestinian factions need to take the necessary measures in coordination with the Lebanese government to preserve calm inside the camp and curb any of the militants' attempts to stir up sectarian or political conflicts in Lebanon and the region.

Palestinians in the camps have always asserted that they are guests in Lebanon waiting their return to their homeland, Palestine.