The precarious security situation in the Ain al-Hilweh Palestinian refugee camp in Lebanon has been reignited by recent clashes between the Fatah movement and Islamist militants inside the camp. 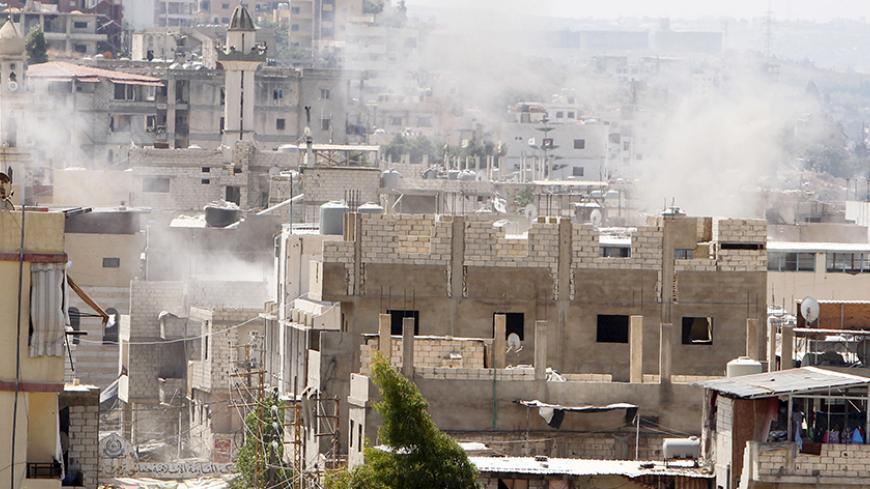 Recent armed clashes in Ain al-Hilweh could signal that tensions are reaching a boiling point that the Palestinian refugee camp in southern Lebanon is ill-equipped to handle. Two people were killed and 15 wounded Aug. 22-29 in fighting between Islamist militants and members of Fatah. Ain al-Hilweh's two square kilometers (0.77 square miles) is home to some 100,000 people. Weapons are widespread, and some of the country's most-wanted people, Palestinian and Lebanese alike, reside there, enjoying the protection of certain armed groups. Over the past few years, matters have been additionally complicated by the Syrian refugees flowing into the camp.

The recent fighting was not triggered on the spur of the moment. On July 25, gunmen assassinated Fatah Brig. Gen. Talal Balawna in the southern part of the camp. No one claimed responsibility, prompting a state of alert among the Palestinian groups in the camp. The situation has been unstable ever since.

A Palestinian security official in Lebanon who requested anonymity told Al-Monitor, “The clashes in Ain al-Hilweh erupted between two parties: Fatah, which wants to get rid of the Islamist groups inside the camp because they are affiliated with foreign parties and assassinated Fatah leaders, and [Islamist] groups that believe Fatah is targeting them with prosecution and assassination in an attempt to eradicate them.”

Ali Barakeh, a Hamas representative in Lebanon, told Al-Monitor that he had tried unsuccessfully to calm the violent outbreaks and ensure some semblance of security. “Between Aug. 22 and 25, I continually communicated with Lebanese and Palestinian parties to put an end to the security deterioration in Ain al-Hilweh. I contacted Col. Khoder Hammoud, Lebanese army intelligence director, and spoke to the Palestinian ambassador in Beirut, Ashraf Dabbour, and leaders from the [Palestine Liberation Organization] factions, the Alliance of Palestinian Forces, Islamic forces and popular figures in the camp,” Barakeh said.

Fathi Abu al-Aradat, Fatah secretary in Lebanon, told Al-Monitor, “Gunmen from Jund al-Sham and what is left of Fatah al-Islam [inside the camp] are hostile toward the Palestinian factions, which creates tension in the camp, since these groups [carry out] suspicious foreign agendas.”

One could argue that the Palestinian factions temporarily contained the Ain al-Hilweh events themselves by withdrawing gunmen from the streets, allowing normal activity to resume the evening of Aug. 30. It appears, however, that the battle is not yet over. Rather, these clashes could be the preamble to a series of clashes due to a very real intra-Palestinian conflict between Fatah and Islamist groups over influence in the camp.

The Palestinian security official said, “Ain al-Hilweh turned into a channel for regional security apparatuses. There is an assassination or an attempted assassination each week, through Islamist groups affiliated with al-Qaeda or Islamic State and even Iran and the Syrian regime. Among the latest parties involved in the Ain al-Hilweh clashes were groups affiliated with Fatah leader Mohammed Dahlan and Palestinian President Mahmoud Abbas. Groups affiliated with Dahlan have been accusing groups supporting Abbas of not fighting the armed Islamists seriously and not showing enough determination. However, both groups want to assert their presence in the refugee camps in Lebanon, and therefore seek to raise the conflicts in the camp rather than quell them, to gain advantage in the rivalry.”

That is likely why on Aug. 25 Mahmoud al-Lino, former commander of the Palestinian armed struggle in Lebanon and Dahlan's closest ally, accused the Palestinian Authority of not giving events in Ain al-Hilweh the attention they deserve.

Raafat Morra, a Hamas media official in Lebanon, told Al-Monitor about measures Hamas had taken to contain the clashes in the camp, which included “commissioning a number of Hamas officials to be present in the camp for around-the-clock follow-up and to participate in the efforts to reach a truce between militants and a cease-fire between the conflicting parties.” He said these actions were aimed at sparing the residents from violence and preventing “humanitarian, political and security disaster, in and around the camp,” adding, “Hamas-affiliated humanitarian and social institutions also helped evacuate hundreds of threatened families and transfer dozens of those trapped under fire to safe areas.”

Some Palestinians in Ain al-Hilweh fear the possibility of a Nahr al-Bared-type tragedy, where fighting between May and September 2007 resulted in the deaths of 158 Lebanese army soldiers, 20 civilians and 60 Fatah al-Islam members. Eight years later, the Nahr al-Bared camp remains destroyed, with no signs of impending reconstruction.

The repercussions of the Ain al-Hilweh clashes are not limited to military and security concerns, but have already had humanitarian repercussions, as a large number of refugees fled Aug. 26 to protect children’s lives. Some went to the Mieh Mieh camp, east of Sidon.

Ain al-Hilweh resident Jihad Radi told Al-Monitor by phone, “Major damage was done to the properties in Ain al-Hilweh, and many civilians got hurt as a result of the violent clashes, during which gunmen used rockets and machine guns. Sand berms were placed on the axes of the fighting, which divided the camp into an eastern side, under Fatah’s control, and a western side, under the control of the Islamist group Jund al-Sham.”

Palestinians increasingly fear for the fate of Ain al-Hilweh as Syrian refugees flood into the camps in Lebanon, and Hezbollah continues its involvement in the Syrian war, a policy that many Islamist groups oppose. In addition, certain Palestinian factions are unable to calmly deal with conflict, instead resorting to violence. All of these factors make the recent Ain al-Hilweh clashes a possible prelude to bigger street battles that could overwhelm residents.