In light of an inability to control mounting tensions at Palestinian refugee camps in Lebanon, the situation warns of an impending explosion. 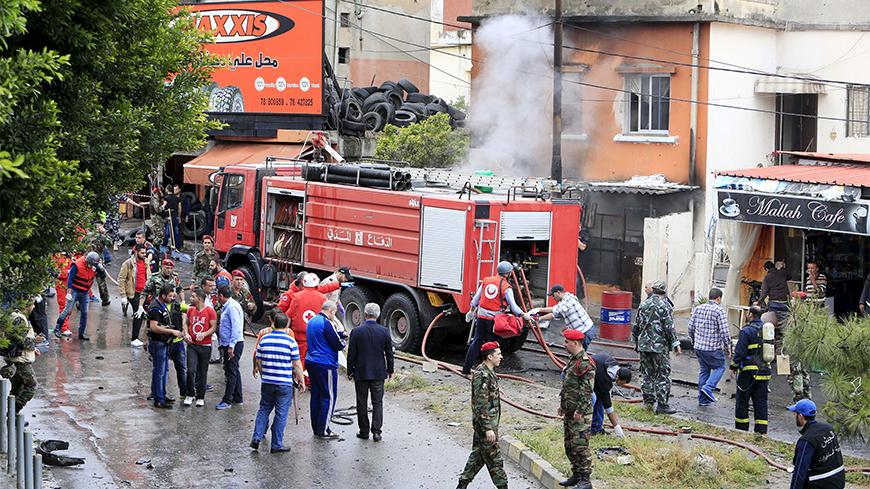 RAMALLAH, West Bank — Things are heating up in Lebanon's Palestinian refugee camps, as many observers fear al-Qaeda and Islamic State (IS) influences are working to create chaos and violence there.

The situation is particularly worrisome right now at the Ain al-Hilweh camp, where Fatah security official Gen. Fathi Zeidan was assassinated April 12. Another member of the secular Fatah movement was killed March 28 by a person officials described as an Islamic militant. There were clashes between Fatah and al-Qaeda-linked Jund al-Sham faction April 1-2, during which guns and rocket-propelled grenades were used.

The tension is bubbling like a volcano ready to explode, and Ain al-Hilweh is perched on its crater.

"Extremist groups are trying to drag the camp into a battle with the Palestinian factions, which are seeking to control the situation on the ground,” a factional source in the camp told Al-Monitor on condition of anonymity.

The source said the camp has become an arena for some regional factions influenced by the ideology or funding of IS and al-Qaeda. Some factions support Sunni groups to counter the influence of the Shiite Hezbollah, and there is a rivalry between supporters of Palestinian President Mahmoud Abbas and supporters of dismissed Fatah leader Mohammed Dahlan.

The PLO, which is in charge of the camps, is concerned about the prevailing situation there. Yasser Abed Rabbo, a member of the PLO Executive Committee and its former secretary, told Al-Monitor, “The situation in the camps in Lebanon can explode at any time, given the presence of forces and parties that have no ties with national and Islamic Palestinian organizations and that are trying to drag the camps toward battles that are inconsistent with the Palestinian and Lebanese interests.”

However, Abed Rabbo said, "The Palestinian factions have an influence in the field and will not allow such an explosion, as they agreed with the Lebanese authorities not to allow these [forces] to reach their goals in the camps.”

Sultan Abu Al-Einein, a member of Fatah’s Central Committee and former secretary of the PLO factions in Lebanon, told Al-Monitor that Zeidan's assassination and the clashes in the camp “are driven by security and political motives aimed at undermining the refugee issue."

He said, "This is knowing that these attempts are an extension to undermining the Yarmouk refugee camp that started in Syria." Yarmouk has fallen under the grip of IS. "The attempts have moved to refugee camps in Lebanon in a bid to explode the situation there,” he added.

Abu Al-Einein said the effort is part of a conspiracy. “What is being prepared for the camps aims to target the refugee issue, and there are a lot of parties employed by Israel and some parties in both the region and the world under fake Islamic and non-Islamic names in a bid to deal a blow to the camps’ stability.”

Palestinians in Lebanon’s camps now have deeper concerns over the unfolding of another tragedy similar to the one that befell the Nahr al-Bared camp in northern Lebanon. That camp witnessed armed clashes from May to September of 2007 between the Lebanese army and the militant Fatah al-Islam movement, clashes that destroyed the camps and displaced its residents.

Asked about the security tension and the potential explosion, Abu Al-Einein said that secular Fatah, the Palestinian factions and the PLO have to shoulder their responsibilities and identify those behind the assassinations.”

The Islamic Jihad representative in Lebanon, Abu Imad al-Rifai, told Al-Monitor, “There is a scheme aimed at creating tension in the safe camps in order to target refugees in Lebanon.” Rifai said there needs to be a Palestinian political group willing to manage the security situation.

“The PLO is failing to manage the camp, as it hasn’t made any political decision, knowing that it lacks a clear vision in this regard. Add to this the Fatah movement’s internal conflicts and organizational weakness, which harm everyone. It is in the interest of the camp and the refugees that Fatah remains strong and cohesive,” Rifai said.

Author and political analyst Khalil Shaheen told Al-Monitor of IS-influenced parties that receive orders from outside Lebanon and plan to use the camps to create chaos and conflicts in Lebanon similar to what has happened in many Arab countries, especially Syria.

“There is dereliction on the part of the PLO toward the refugees," Shaheen said. "The Palestinian factions have to work jointly and strengthen the supreme political leadership and the joint security force responsible for camp security to control most parts of the Ain al-Hilweh refugee camp and serve as a lesson for the other camps.”

Ahmed Hanoun, director of the PLO Department of Refugee Affairs, told Al-Monitor the PLO is no longer able to resolve all the problems plaguing the camps, amid the chaos in the region.

Therefore, other entities in the region have to agree to protect the camps from conflicts while controlling the security situation in Lebanon — especially knowing that the situation is affected by Syrian developments.

Hanoun added, “The [PLO] is making political efforts to prevent the camps from exploding and being dragged into an open war, and it is taking advantage of the political and security coordination with the Lebanese state. It should be noted that the national factions know full well how the situation will be in case of fighting, given the Nahr al-Bared and Yarmouk refugee camps' experiences.”

It seems Palestinians in the camps do not have magic solutions to protect the camps from being drawn into a battle. Still, they are counting on unity and increased coordination between the Palestinian factions and the political and security authorities.