Salafist Factions on Rise At Palestinian Camp in Lebanon

The historically contentious Palestinian refugee camp of Ain al-Hilweh in southern Lebanon has been shaken up by the the surge in the proliferation of hard-line Islamism in the region, Nasser Chararah reports. 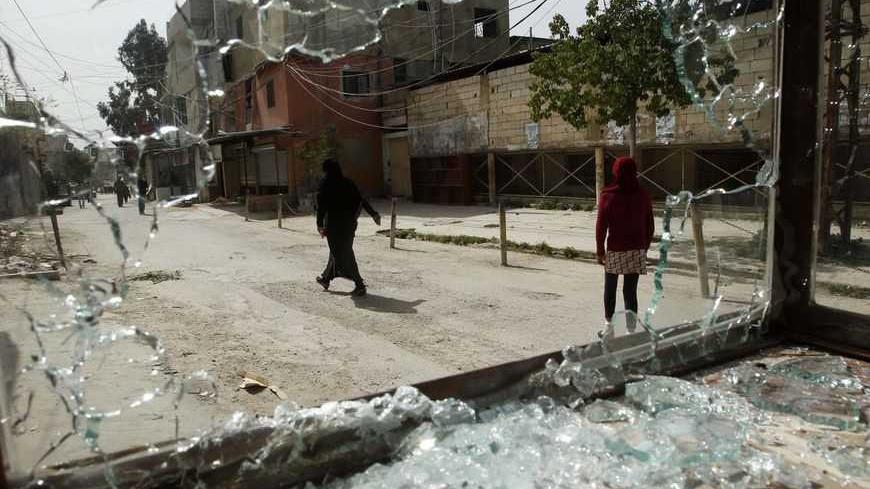 Women are seen through a broken window after clashes at Ain al-Hilweh Palestinian refugee camp near the port city of Sidon in south Lebanon, March 12, 2013. - REUTERS/Ali Hashisho

Bilal Badr, an official from the Fatah al-Islam movement (a takfiri, fundamentalist and extremist organization linked to al-Qaeda) escaped an assassination attempt yesterday [March 12] by a masked assailant in the neighborhood of Ras al-Ahmar in the Lebanese Ain al-Hilweh refugee camp.

Fatah al-Islam, according to exclusive information received by Al-Monitor, accuses Fatah of being responsible for the attack. Subsequently, sporadic security problems have been taking place inside the camp, indicating that the assassination attempt against Badr could spark an all-out military confrontation that has been looming for months between hard-line Islamist movements in the camp and Fatah.

But there is growing concern among the Lebanese security services that in the case of such a confrontation, the fundamentalist groups may manage to get a hold of the whole camp and expel the Fatah movement along with all of its supporting factions.

About three weeks ago, these Islamist groups forced a Palestinian faction allied with the Syrian regime ("al-Saeqa," the Palestinian military wing of the Syrian Baath Party), to close its office in the camp, and housed displaced Palestinians from Syria in it.

Toward the end of last month, these same groups threatened the Popular Front for the Liberation of Palestine — which is allied with the Syrian regime — that they would break into its offices in the camp if it does not vacate them. The Front, however, said it was prepared for a confrontation.

A few days ago, unofficial contact was made between the Lebanese state and leaders in Ramallah. This contact focused on the need to strengthen Fatah’s military and political presence in Ain al-Hilweh in order to establish a balance between Palestinian moderates and the Islamist extremist groups inside the camp. Fatah, however, is facing an organizational crisis in Lebanon given the growing differences between the symbols of its leaders. Despite the dozens of attempts it has made, the Ramallah leadership failed to reach a settlement within the Fatah organization in Lebanon to end these persistent differences.

In any case, a full military clash that could occur against the backdrop of the repercussions of Badr’s assassination attempt is likely to lead to the fall of the entire camp at the hands of the expansive Islamist movement that currently controls more than three-quarters of the camp.

Badr has been living in Ain al-Hilweh camp for years, deemed to be the most important camp among all the Palestinian refugee camps inside and outside Lebanon. It is conventionally called "the capital of Palestinian exile." The importance of this camp does not lie in its size — barely 1 square km. — but in the fact that it is home to the whole range  of Palestinian groups and factions.

The al-Qaeda-affiliated groups took advantage of this, infiltrating the camp over the past few years, and taking refuge there. These groups established "guest houses" in the camp and “sheltered”  mujahedeen of all nationalities on their way back or on their way to fight in hot zones around Yemen, then in Iraq and now in Syria.

Since the beginning of the last decade, the Islamist influence in the Palestinian refugee camps in Lebanon has started to grow, especially in those found in Nahr al-Bared in the north and Ain al-Hilweh in the south, at the expense of Palestinian nationalist and other leftist factions.

Moreover, Islamist militant groups such as Osbat al-Ansar, the most numerous and powerful group militarily, have emerged. This group is led by Abu Muhjin (Tarek Saadi) who had gone to Iraq to fight against the U.S. occupation, then followed Abu Musab al-Zarqawi with his group, reportedly serving as his deputy.

Later on, the group Fatah al-Islam emerged. This group declared in 2008 Nahr al-Bared an Islamist emirate after it expelled all other Palestinian factions. Chief among these was the Fatah-Arafat movement. This group, led by Shaker al-Absi, a convert from the doctrine of the Fatah movement to the Islamist jihadist Salafist ideology, had committed a massacre against Lebanese soldiers. This led the Lebanese army to besiege the camp and expel Absi and his group, which included volunteers from Asian and Arab nationalities.

Later on, the principle emirs of Fatah al-Islam, including Badr, gradually infiltrated the camp and took refuge in the environs of Osbat al-Ansar, which harbored them and allocated an area in the camp for them under its indirect protection. This area is located on the camp’s periphery and called al-Tawaree or al-Taameer neighborhood.

Osbat al-Ansar has not allowed Fatah to attack them. They have been known over the past years as the Tawaree neighborhood groups, comprising three main groups: Fatah al-Islam, Jund al-Sham and the Abdullah Azzaz battalions, led by the same Emir who currently leads al-Qaeda in the Levant.

There are seven very prominent figures of these groups, and Badr, who belongs to Fatah al-Islam, is one of them. While he is considered to be the most dangerous one on the ground, according to Lebanese security,the rest are  “from Fatah al-Islam.”

These figures includes Mohammed al-Shuaibi, known as Abi Hasfa, Mohammed al-Dokhi, an explosives expert accused of firing missiles at the United Nations Interim Force in Lebanon (UNIFIL), and Ousama Shehabi, the emir of the group. Other members are Mohammed al-Arifi, a member of the Abdullah Azzam Brigades, and Majid Bin Mohammed al-Majid, who gave himself the nickname of Abu Qatada al-Filistini, although he is a Saudi national. He is the emir of al-Qaeda in the Levant and founder of the Abdullah Azzam Brigades in the Levant. Recently, there was conflicting information as to his whereabouts, some of which confirmed that he left the camp to go to Syria, where he fights under the his group's banner. Another member is Tawfiq Taha, who is affiliated with Jund al-Sham, but there is information that he had joined Fatah al-Islam.

Since the start of events in Syria, the proliferation of takfiri groups in the Taware neighborhood has spread across the Ain al-Hilweh camp. There are two reasons behind this proliferation. The first is the weakness of the Fatah movement and Palestinian leftist factions in the camp, because of the escalated hard-line Salafist Islamist atmosphere throughout the region. The second reason pertains to the fact that Jabhat al-Nusra in Syria has become attractive to Sunni Palestinian refugees in the camp, particularly since a significant percentage of displaced Palestinians — who fled the Syrian army bombing of the Yarmouk refugee camp in Syria to the Ain al-Hilweh camp — sympathize with Jabhat al-Nusra.

Under this new atmosphere linked to the consequences of the Syrian events, another development emerged in March 2012 that has had a dramatic impact on the power distribution map in favor of the takfiri groups and their Islamist allies in the Taware neighborhood in the camp.  On that date, prominent figures of this group decided to move from Ain al-Hilweh camp to Syria to carry out jihad with Jabhat al-Nusra — which was established in 2011 — and which was weak, numbering only a few hundred at the time. The engagement of the Taware groups in jihad with Jabhat al-Nusra in Syria — among other reasons —made Jabhat al-Nusra the most prominent group at the organizational and military levels compared to its sister groups operating in Syria within a matter of months.

Chief among those who went from the Taware neighborhood to Syria was Majid al-Majid. His objective was to remove Abu Mohammed Joulani from the post of emir of Jabhat al-Nusra and replace him. Yet, a large part of his associates, as well as prominent figures from Jund al-Sham and Fatah al-Islam in particular, turned against him in Syria. They joined Joulani, and engaged in training and organizing his group, until it reached the stage where it holds the strongest card in the opposition’s internal military balance.

This has promoted Jabhat al-Nusra and made the Taware neighborhood groups attractive in Ain al-Hilweh. This doubled the number of members enlisted from a few dozen to hundreds. Moreover, its proliferation is no longer limited to the outskirts of the camp in the Taware and Tamire neighborhoods, having extended to its interior. Its ties with Osbat al-Ansar are no longer characterized by subordination; they have become partners in the Islamist project in the camp in the face of Fatah and leftist Palestinian factions. This project has become more powerful, after Hamas — which parted ways with Hezbollah and the Syrian regime — joined it.

Under this project, the Taware groups — Fatah al-Islam, Jund al-Sham, some wings of the Abdullah Azzam Brigades and other smaller groups — seek a military and organizational unity within the project to establish a second, Lebanese branch of Jabhat al-Nusra. Preceding this project, the three main formations dissolved their organizational frameworks, and each of the five prominent figures of al-Qaeda in the camp became head of a group that consists of dozens.

The objective is to move from their previous organizational structure to a new one under the name of Jabhat al-Nusra in Lebanon — a proxy of Jabhat al-Nusra in Syria — awaiting the opportune political timing to announce itself. These three groups function under the same project — along with groups located in the Tripoli neighborhood of Bab al-Tebbaneh in northern Lebanon, led by Emir Hussam Sabbagh. He is a hard-line Salafist, characterized by the Lebanese army intelligence as the emir of al-Qaeda in northern Lebanon.