Who is behind new round of violence in Lebanon refugee camp?

The Palestinian refugee camp of Ain al-Hilweh in southern Lebanon has witnessed heavy clashes between factions linked to a jihadi cell and the Palestinian Joint Security Force. 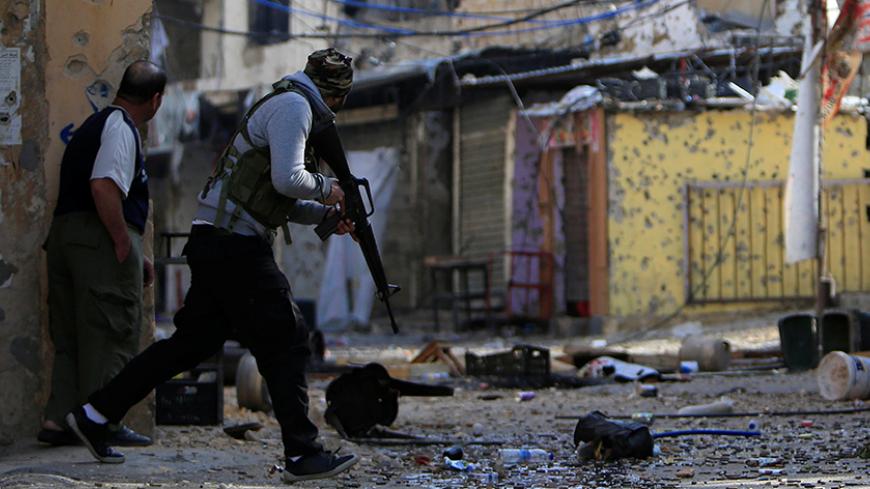 A Palestinian Fatah gunman carries his weapon as he attempts to cross a street in the Ain al-Hilweh refugee camp near Sidon, Lebanon, April 10, 2017. - REUTERS/Ali Hashisho

The Palestinian refugee camp of Ain al-Hilweh in southern Lebanon has witnessed six days of intense clashes that have pitted a coalition of Palestinian forces against jihadi factions led by Bilal Badr. The gunfights, which began April 7, have killed at least eight people and, according to Palestinian sources, are linked to the presence of a jihadi cell in the camp that is affiliated with radical organizations such as Hayat Tahrir al-Sham (formerly Jabhat al-Nusra) and the Islamic State (IS).

“We have every intention of arresting Bilal Badr: He has wreaked havoc in the camp. While the official death count is at eight, we believe that around 12 to 13 people have been killed in the fight," said Fouad Othman, the head of the Democratic Front for the Liberation of Palestine (DFLP).

Badr heads the radical group al-Shabab al-Muslim (Muslim Youth), a coalition that includes remnants of extremist organizations such as Fatah al-Islam and Jund al-Sham. Fatah al-Islam fought the Lebanese army in a three-month battle in 2007 in North Lebanon. Jund al-Sham was also implicated in several rounds of clashes with the Lebanese army in Sidon.

“Followers of Badr are for the most part affiliated with Hayat Tahrir al-Sham. There are elements that have pledged allegiance to IS and fought with Badr in the last few days,” a source who has knowledge of Islamic affairs in the camp told Al-Monitor on condition of anonymity.

According to Othman, Badr is still fighting in the area surrounding his home in Ain al-Hilweh's al-Tiri neighborhood, as he is besieged by a coalition of Palestinian factions. According to Palestinian sources, Badr has anywhere from 20 to 60 followers, but since other factions have lent him support, his number of followers is closer to 200.

Members of al-Shabab al-Muslim were recently linked to the attempted attack on the Costa coffee shop in Beirut on Jan. 21. Lebanese soldiers prevented Sidon resident Omar Assi from carrying out that attack. “There is a connection between Assi and Badr followers, but details remain murky,” added the source, who has knowledge of Islamic affairs.

Assi was a follower of the radical cleric Sheikh Ahmad al-Assir, who is now in prison for his role leading a two-day battle in 2013 between the Sidon neighborhood of Abra against the Lebanese army. Twenty Lebanese soldiers were killed during the battle. Assir is a fierce opponent of Hezbollah and accused the Lebanese government of colluding with the militant group. Some of Assir’s followers in Sidon are believed to have pledged allegiance to IS.

Assi is the second Assir follower to be linked to a terror attack. In November 2013, another follower, Mouin Abu Dahr, was involved in the suicide bombing of the Iranian Embassy in Beirut. Palestinian sources believe that Assir's radicalized followers have joined forces with extremist factions in Ain al-Hilweh, like Badr’s group.

Besides pledging allegiance to IS and Hayat Tahrir al-Sham, some of the camp’s residents have gone to fight in Syria. “A maximum of 40 people have joined the ranks of IS and are fighting in Syria and Iraq,” Oueid said. In May 2016, two young men, Riad Hawran and Brahim Abdel Kader, were killed fighting alongside IS in Iraq.

On April 4, Lebanon's al-Joumhouria newspaper reported that Egyptian terror organization Ansar Bayt al-Maqdis was training in Ain al-Hilweh. “There is no truth in this accusation. We have neither the logistics nor the space for any faction to provide such training in the camp,” Oueid said.

The recent clashes in Ain al-Hilweh underline the attempts of the more pragmatic Palestinian factions to crack down on radical elements in the camp. Formed in 2015, the Palestinian Joint Security Force in Ain al-Hilweh includes 17 armed factions; some of those include Fatah, the PLO, the Palestinian National Security Forces, Hamas, the Islamic Jihad, the DFLP, Osbat al-Ansar, Ansar Allah, the Popular Front for the Liberation of Palestine and the People’s Party. The coalition aims to curtail security problems in the camp to avoid the unfortunate experience of the Palestinian camp Nahr al-Bared, which was destroyed in 2007 after extensive fighting between Fatah al-Islam and the Lebanese army.

Interestingly, older jihadi organizations such as Osbat al-Ansar have increasingly taken on the role of mediators. Osbat al-Ansar has gradually abandoned its violent behavior over the last few years. The organization has been crippled by its loss of followers to more extreme groups like al-Shabab al-Muslim. Since then, Osbat al-Ansar has attempted to manage disputes with the more radical Jund al-Sham and Fatah al-Islam.

Members of those last two groups have been victims of a series of mysterious killings in Ain al-Hilweh since 2007. Sources in the camp affiliated with Islamic groups attribute the killings to rogue elements in Fatah.

Several arrests have also drawn public attention to Palestinian camps. In January 2013, the Lebanese army killed a Palestinian member of the Abdullah Azzam Brigades, which claimed responsibility for the Iranian Embassy bombing in 2013. The brigades’ late leader, Majed al-Majed, was reportedly based in Ain al-Hilweh before traveling to Qalamoun, Syria, to pledge allegiance to Hayat Tahrir al-Sham's leader, Abu Mohammed al-Golani. Lebanese army intelligence arrested Majed upon his return to Lebanon, where he died in army custody. Another Ain al-Hilweh resident, Naim Abbas, was arrested after being linked to attacks on Beirut's southern suburbs.

Ain al-Hilweh’s flirtation with jihad and violence will not end with a cease-fire with Palestinian factions. Without the disarmament of factions and the arrest of jihadis in the camp, this latest round of fights may only be one of many to come.