A suspect in the failed Jan. 21 suicide attack on a Beirut coffee house has reportedly admitted to being a homegrown terrorist aligned with the Islamic State and a follower of Salafist Sheikh Ahmad al-Assir. 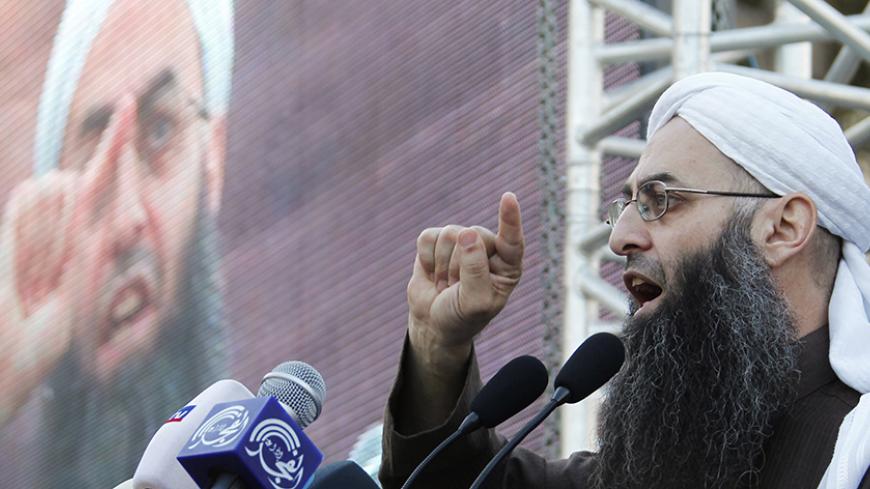 Conflicting portraits are emerging of Omar Assi, who police said attempted a suicide bombing Jan. 21 at a Beirut cafe. The young man is allegedly the second suicide attacker in recent years from the city of Saida.

The city, about 25 miles south of Beirut, was also home to Mouin Abou Dahr, who was behind the deadly November 2013 terror attack on the Iranian Embassy in Beirut. Both men were followers of radical Sheikh Ahmad al-Assir. Assir is now in prison, but observers say he has a pool of followers in Saida, some of whom have pledged allegiance to the Islamic State. The Lebanese authorities say Assi confessed to being one of them.

Officials allege Assi walked into the Costa cafe in the bustling Beirut neighborhood of Hamra and attempted to set off an 8-kilogram (17.6-pound) shrapnel-laden explosive belt before he was arrested by the security forces. According to sources within the Ministry of Interior, Assi’s arrest was made possible by the December arrest of several terrorist cells in Saida and north Lebanon.

“Islamic State activity has been curbed by the efficiency of security services. [IS] now operates in small, decentralized cells,” a ministry source told Al-Monitor on condition of anonymity.

The Daily Star reported Jan. 27 that, according to Lebanese military officials, Assi confessed to the plot and admitted he had pledged allegiance to IS.

Assi, who was working as a registered nurse in Saida, is from Sharhabil, a calm neighborhood in the city. Located on Saida’s north side, the lower-to-middle-class area is home to merchants, taxi drivers and workers with limited means. Most residents Al-Monitor spoke with described Assi as an extremely polite man.

“He comes from a very nice family,” one neighbor told Al-Monitor on condition of anonymity. “He is always polite and helpful. He used to carry my shopping bags. … He never went out; he went directly to his place of work and back home.”

Assi is portrayed as a lonely and responsible figure. His brother, Farouk Assi, denies Omar was involved in the bombing. He told Al-Monitor, “The accusations are fabricated. They don’t make sense. I used to frequent Costa and my brother knew that. The pictures shown of my brother with an explosive vest were tampered with. My brother has a smaller frame.”

Another neighbor spoke of Omar Assi’s extreme religious devotion, saying, “He was overly religious in a strange way, quoting the Quran in every mundane discussion. He had a strong view of his role as the family provider and leader, although he was the middle child.”

Lebanese security sources said Assi was a member of a Saida terrorist cell. Moustapha, a pastry shop owner in Saida who preferred not to divulge his family name and who knew Assi personally, said that like Abou Dahr, Assi followed the cleric Assir, who in 2013 led a two-day battle in the Saida neighborhood of Abra against the Lebanese army, killing 20 soldiers in the process. Assir was a fierce opponent of Hezbollah and accused the Lebanese government of colluding with the militant group.

“Both Omar and Mouin resented what they perceived as the persecution of Sheikh Assir. They both felt they needed to do something to repair the damage done to him. Sheikh Assir has successfully built a large network of followers among the city’s youth,” Moustapha told Al-Monitor.

Saida journalist Fadi Talej told Al-Monitor that an unknown faction is galvanizing the pool of Assir’s followers through a Facebook page called Karama Awalan (Pride First), highlighting the oppression of the families of militants involved in the Abra clashes. “Over a hundred young men disappeared from the city after the 2013 clashes — some fled to Turkey, others are in hiding. They might be activating Assir’s followers. There is also possible involvement of radical factions in Ain al-Hilweh,” Talej said.

Security sources in the Palestinian refugee camp of Ain al-Hilweh in Lebanon, southeast of Saida, report that the PLO and some Islamic factions are clashing with a group called Shabab Muslim, which is affiliated with IS and Jabhat Fatah al-Sham (formerly Jabhat al-Nusra). Shabab Muslim includes remnants of the extremist organizations Jund al-Sham and Fatah al-Islam.

“We know that many of Assir’s youth pledged allegiance to IS and have connections with people inside the camp,” a Palestinian source speaking on condition of anonymity told Al-Monitor.

Small, densely populated Ain al-Hilweh is home to more than 100,000 Palestinian Lebanese, as well as Palestinian refugees from Syria. The camp is a known jihadi bastion, home to multiple factions such as al-Qaeda-affiliate Abdallah Azzam Brigades and Osbat Ansar. An Ain al-Hilweh radical sheikh, Oussma Shehabi, had reportedly issued a fatwa against allowing the bombing. However, Salafist Sheikh Ahmad Amoureh told Al-Monitor that Shehabi denied the camp had any connection with the suicide attacker.

Still, Amoureh believes that the increase in the level of violence, from the Abou Dahr event to the Assi terror plot, is worrisome, despite the failure of the operation. “When Abou Dahr had targeted the Iranian Embassy, it was a political statement, while Assi was just targeting civilians,” the cleric said.

The proximity of Ain al-Hilweh to Saida may facilitate the activity of terror networks because of lax security measures inside the camp, according to Al-Hayat journalist and analyst Hazem Amine. “Pressure is high in Saida due to pockets of poverty and extreme religiosity. In addition, the city is a demarcation line [between Sunnis and Hezbollah],” Amine told Al-Monitor.

Saida is the birth city of Sunni Prime Minister Rafik Hariri, who was assassinated in a massive blast in 2005 in which five Hezbollah members were implicated. The city is mostly Sunni but located in southern Lebanon, which is mostly Shiite and considered a Hezbollah bastion.

Assir can still count many followers in the city who believe they are marginalized and treated unjustly. That feeling will not subside soon and may generate further attacks that may be more successful.