Al-Qaeda-affiliated groups based in a neighborhood adjacent to Ein el-Hilweh refugee camp in southern Lebanon are exploiting the Palestinian refugees' dire situation to increase their support base. 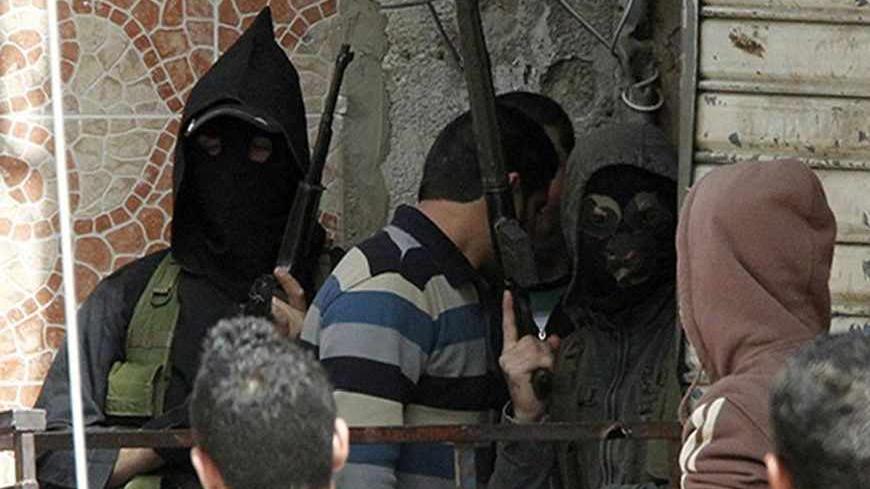 Every once in a while, in Ein el-Hilweh Palestinian refugee camp near Sidon — the “capital of southern Lebanon” — there are armed clashes between Fatah and al-Qaeda-affiliated fundamentalist groups such as Fatah al-Islam.

The latest clashes took place on Sept. 17, when a Jund al-Sham gunman tried to destroy a surveillance camera installed by Fatah al-Islam, whose members reacted by opening fire on him. An armed confrontation between the two groups ensued.

A few years ago, Muslim fundamentalist jihadist groups quietly established an “Islamic emirate” in the al-Taware neighborhood, which is adjacent to the camp. Technically, the neighborhood lies outside Ein ​​el-Hilweh refugee camp, but because of demographic and security interaction with the camp, the neighborhood has effectively become part of it.

The Taware neighborhood poses a multifaceted problem to the Lebanese government. On one hand, thousands of wanted persons reside inside the Ein el-Hilweh camp, according to security sources who spoke to Al-Monitor. They are beyond the reach of Lebanese authorities, who cannot enter the camp for political reasons. On the other hand, the camp’s population has been significantly growing. According to unofficial statistics, 50,000 Palestinian refugees live inside the 1.5 km square (0.9 mile) camp. In addition, Ein el-Hilweh is the capital of the Palestinian diaspora because it includes all Palestinian factions — nationalist, Islamic and jihadist.

Not long ago, United Nations Relief and Works Agency refugee aid became scarce, which has increased the rates of poverty and crime. That has helped the jihadist and extremist Islamist groups, which exploited the destitution and despair among the refugees to widen the jihadists’ support base.

About a year ago, Palestinian refugees from Syria moved into the camp to escape the fighting between the Syrian regime and the opposition in the Yarmouk Palestinian refugee camp near Damascus. The new arrivals are estimated at between 8,000 and 10,000, according to official security reports obtained by Al-Monitor.

When the Lebanese army took control of the stronghold of Lebanese Salafist Sheikh Ahmad al-Assir in June, there was military coordination between him and jihadist groups in al-Taware, but political interference prevented them from helping Assir in the battle. Some in the Lebanese army suggested storming al-Taware and, in cooperation with Fatah, cleansing it of jihadist groups. But that idea was abandoned for fear that the other refugee camps in Lebanon would stand in solidarity with al-Taware and put the Lebanese army in a state of confrontation with a broad Palestinian front across Lebanon.

Each time the jihadists in al-Taware cause security problems inside the camp, the Lebanese political and security authorities become concerned about the jihadists' activities, but there seems to be no practical way to get the jihadists out of the al-Taware neighborhood.

First, those groups have connections with Lebanese and Syrian jihadist cells in several areas of Lebanon and Syria, which indicates that Syrian, Lebanese and Palestinian jihadist and Salafist circles are linked. And if the links between them solidify further, it will cause a terrorist problem beyond Lebanon’s capabilities to deal with.

Second, the five groups in al-Taware are trying to strengthen their presence inside Ein el-Hilweh by exploiting their close proximity to the camp as well as the power balance between Fatah and its Palestinian nationalist allies, and Palestinian Islamist groups such as Hamas and Osbat al-Ansar.

Osbat al-Ansar is considered the strongest Salafist Islamic group in the camp. It was founded by Abu Muhjin, who fought alongside Abu Musab al-Zarqawi in Iraq against the US occupation. Although Osbat al-Ansar has lately tended toward moderate stances, its ideology is still pro-al-Qaeda. There is information that Osbat al-Ansar is the main — albeit indirect — overseer of the five jihadist groups, which include Jund al-Sham.

In recent days, all the Palestinian factions in Ein el-Hilweh refugee camp agreed to set up a joint military force that would manage the camp’s security. That step aimed to stabilize the camp and establish a unified security reference that is untainted by jihadist groups, and that would thwart those groups’ attempts at raising the tension inside the camp.

Some think that the shooting incident between Fatah and Jund al-Sham on Sept. 17 — 24 hours after the joint force was established — was triggered by the jihadists to prevent the formation of that force, whose formation the Lebanese army is encouraging.