Syria’s Conflict May Already Be in Lebanon

Following recent conflict in Lebanon’s Ein el-Hilweh Palestinian refugee camp, it is becoming ever more apparent that Syria’s conflict, as represented between Jabhat al-Nusra and Hezbollah, is already in Lebanon. 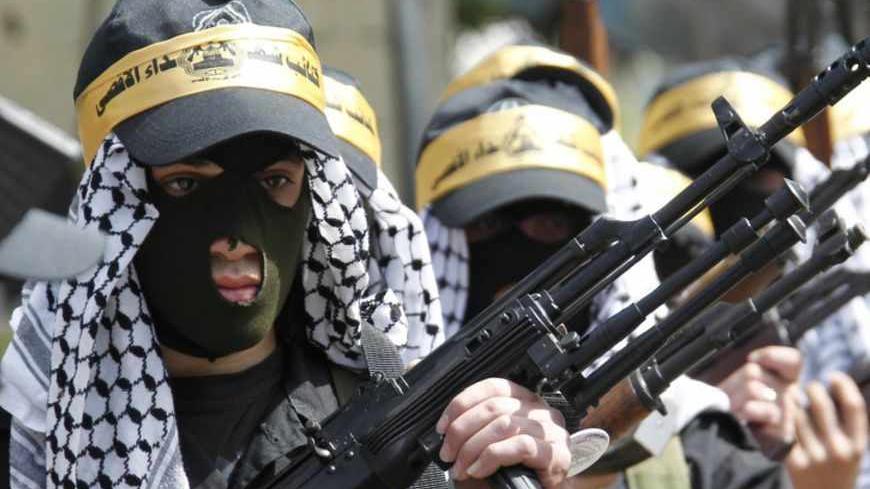 Palestinian Fatah members carry their weapons as they parade to mark the 65th anniversary of Nakba, at Ein el-Hilweh Palestinian refugee camp near the port city of Sidon, southern Lebanon, May 15, 2013. - REUTERS/Ali Hashisho

The Lebanese security authorities received information this month that the emir of Jabhat al-Nusra in Syria, Abu-Mohammad al-Golani, recently visited the Ein el-Hilweh Palestinian refugee camp in Lebanon. The information added that he held meetings with Salafist groups that support his front, most notably Fatah al-Islam and Jund al-Sham, which resulted in an agreement to carry out military operations against Hezbollah and the United Nations Interim Force in Lebanon (UNIFIL). According to informed sources, the information was obtained from Western sources and details related to it are currently being probed.

A military source in the Lebanese intelligence services told Al-Monitor that they have reason to believe that the person who visited the camp was a representative of Golani, not Golani himself.

However, information available to the Lebanese security bodies — both the official ones or those belonging to Hezbollah — possess information and analytical reports indicating that Jabhat al-Nusra might carry out bombings against Hezbollah sites and other targets in response to the latter’s military participation in Qusair and its countryside.

Information obtained by the Lebanese security services corresponding with that of foreign intelligence apparatuses — both obtained from sources close to the Syrian opposition — indicates that Jabhat al-Nusra in Syria has decided to transfer the fight to Lebanon, adopting rules of engagement different than those in Syria. The aim is to launch retaliatory strikes against Hezbollah, and gradually shift the conflict into some kind of long-term war against it.

This information is based on significant military and political changes that took place inside Ein el-Hilweh camp during recent weeks, including the launch of an extensive training campaign for displaced Palestinians by Fatah al-Islam and Jund al-Sham. The campaign is overseen by Osama Shehabi (an activist in one of the takfiri groups linked to al-Qaeda). In contrast, Mahmoud Issa, also known as “Al-Lino” — a Fatah commander who has a troubled relationship with the Fatah leadership in Ramallah — launched a training campaign of his own among the refugees.

The competition between “Al-Lino” and the Islamic forces affiliated with Jabhat al-Nusra reflects part of the silent conflict between the Qataris and the UAE, which is indirectly implementing a Saudi agenda. Qatar encourages Jabhat al-Nusra’s decision to compensate for the defeat in Qusair by responding in Lebanon, by inflaming the Jabal Mohsen-Bab al-Tabbaneh front in the north and expanding the influence of Salafist forces over the Ein el-Hilweh camp.

In contrast, the UAE is involved in the camp through Mohammed Dahlan, who was a former senior security official in Fatah before he disagreed with Palestinian Authority (PA) President Mahmoud Abbas. There is information that Dahlan is preparing to declare a new militant movement inside the Ein el-Hilweh camp. Thus, the camp is expected to witness increased security tension. This comes as part of a quest to control the camp among regional powers that have been divided on the identity of the opposition, over who they want to be at the forefront of the transitional process in Syria. This shows that all details of the conflict in Syria have moved to Lebanon to an extent that French Foreign Ministry officials have said that the non-transmission of the conflict in Syria to Lebanon would require a miracle.

The position of Hamas

Hamas is adopting positions inside the camp with the aim of appearing as part of the Palestinian Islamic axis, which is allied with the Syrian opposition. It took recent positions that confirm its choice. About 10 days ago, at a meeting of the Islamic forces in the camp with the participation of some Palestinian factions, Hamas rejected the issuance of a statement that condemns the Israeli raid on Damascus. Hamas’ representative at the meeting, Abu Ahmed Fadl, justified the decision by saying that the group distances itself from the Syrian events. However, it was clear that Hamas, through its decision, was distancing itself from the regime even if the opposing party was Israel.

Recently, Hamas refused to participate in the Palestinian security force in charge of maintaining security in the camp and coordination among all factions to contain any security incident. The position of Hamas undermines the new initiative seeking to activate this force in order to confront serious dangers threatening the already fragile security situation in it.

In conclusion, Hamas has left its centrist position and now seeks to act as leader of the Islamic current in the camp against the pro-PA national Palestinian side.

According to security sources, after its departure from the Syrian regime, Hamas decided to compensate for the evacuation of its offices in Syria by establishing others in the Ein el-Hilweh camp and other Palestinian camps in Lebanon. Hamas’ military force in Ein el-Hilweh currently comprises around 250 to 300 fighters.

Also, Palestinian sources have said that the recent clash in Ein el-Hilweh in relation to the assassination of Al-Lino’s aide, Muawiyah Mazloum, by the Salafist Bilal Badr group affiliated with Jabhat al-Nusra falls within the category of settling scores between the two parties. They added that the timing [of the clash], coinciding with the start of the decisive Syrian attack on Qusair, indicates that the green light has been given to destabilize security in the camp as a prelude to implementing the revenge equation for Qusair, whether in Ein el-Hilweh or Jabal Mohsen, starting from Bab al-Tabbaneh in Tripoli, which has been embroiled for almost a week in violent clashes between two camps, one that supports the Syrian regime and another that opposes it.

Nasser Chararah is a contributing writer for Al-Monitor's Lebanon Pulse and for multiple Arab newspapers and magazines, as well as the author of several books on the Hezbollah-Israeli conflict. He is also the head of the Lebanese Institute for Studies and Publications and has worked for the Palestinian Research Center