As refugees move between Syria and Lebanon, fears grow that al-Qaeda-affiliated Islamist groups could increase their influence in Lebanon, writes Mohammad Harfoush. 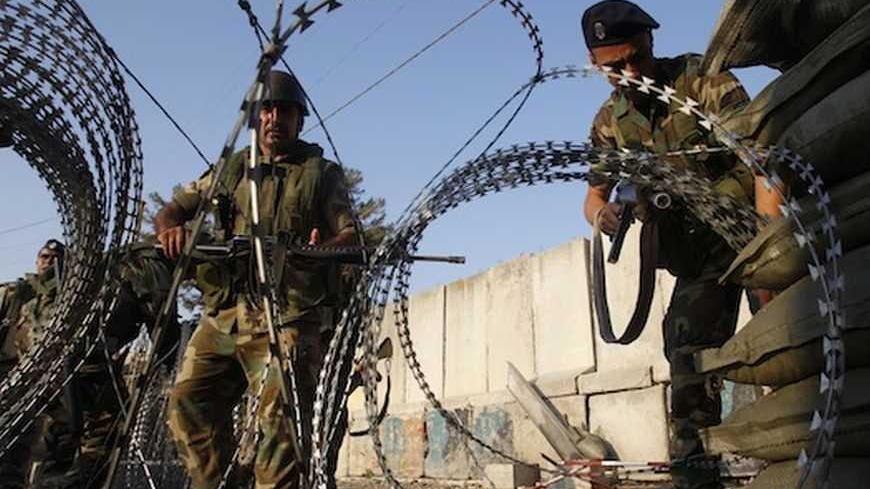 Lebanese soldiers set up wire at the entrance of the Ain al-Hilweh refugee camp in south Lebanon, June 19, 2012. - REUTERS/Ali Hashisho

Reports in Beirut from local and Western media reveal that al-Qaeda has begun to establish structural roots for its organization in Lebanon, following instructions from Ayman al-Zawahri. The reports name Majid al-Majid as the organization’s new emir in the Levant and reiterate that the group has established a road map that includes terrorist operations against political figures, religious institutions and United Nations Interim Force in Lebanon (UNIFIL) forces.

These same reports hint that al-Qaeda elements and affiliates — particularly Jabhat al-Nusra, which has been blacklisted by the US because of its affiliation with al-Qaeda — have spread across Lebanon from the north to the south with weapons and equipment. Unified leadership for Jabhat al-Nusra has also been reestablished at the Ain al-Hilweh camp. Osama Amin al-Shihabi has been appointed head of the Palestinian wing in Lebanon. Members of the temporary leadership include Ahmad Mohammad al-Dukhi (Khardaq) as the political chief, Haytham al-Shaabi as military commander and Mohammad al-Shaabi as regulatory and administrative chief.

The relevant parties were notified of the new leadership for this organizational wing, and they were asked to endeavor to bring together all elements of Fatah al-Islam and Jund al-Sham. A number of members from Osbat al-Ansar recently joined the al-Qaeda branch to express their rejection of their current leadership. The report also outlines the aim of turning the Hatin neighborhood in Ain al-Hilweh into a center for security, in cooperation with Ziyad Abu al-Naaj. In addition, the group aims to control all of the camp’s facilities, streets and entrances to ensure that the camp remains completely under the  group’s control. The report further stipulates the calculated distribution of the group’s constituents so that the wing will be present across as much of the camps as possible.

Previous intelligence has provided records of telephone conversations between individuals outside Lebanon and others within Palestinian camps. These indicate that the camps are unstable, providing fertile ground for fundamentalist groups to carry out acts of sabotage during the ongoing Syrian crisis. The report emphasized the importance of working to secure stability in the camps to prevent the possibility of a similar situation in Lebanon.

The intelligence adds that messages were given by Palestinian officials to multiple Lebanese and regional parties, counseling them to communicate with the other Palestinian constituents within Lebanon so as to fortify the camps against the spread of fundamentalism. It expresses particular urgency regarding this matter after elements from Jabhat al-Nusra entered the Ain al-Hilweh camp using displaced Palestinians from the Yarmouk camp in Damascus.

On a related note, the reports also state that the French unit working with UNIFIL intends to raise its level of preparedness and to limit troop movements, as a precautionary measure against threats al-Qaeda has made in response to France’s military intervention in Mali against Islamist militant groups.