Salafist and jihadist groups, including those affiliated with al-Qaeda, appear to be deepening their roots within Lebanon, writes Nasser Chararah. 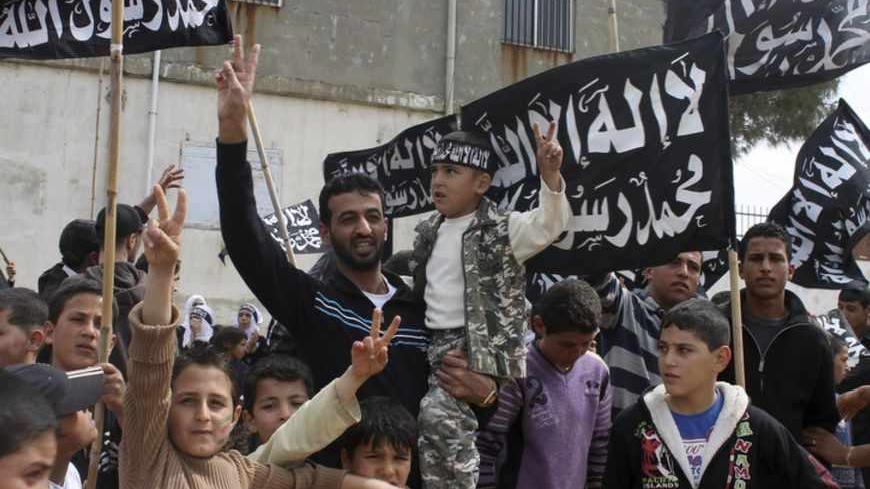 Syrian refugee children and men gesture, as they hold flags and wear headbands during a protest marking two years since the start of the uprising in the Wadi Khaled area, northern Lebanon, March 15, 2013. The headbands and flags read, "There is no God but Allah and Muhammad is the messenger of Allah." - REUTERS/Roula Naeimeh

Waving al-Qaeda’s flag during protests and marches carried out by Salafists in Lebanon has become very common. Al-Qaeda’s flag was recently seen  flying in the center of Beirut when 2,000 Salafists gathered in the capital upon the call of Sheikh Ahmad al-Assir to go to the streets. In one of Beirut’s neighborhoods [Tariq al Jadidah], which is the stronghold of the Sunni sect in the Lebanese capital, young masked men go occasionally to the streets waving al-Qaeda’s flag, as is the case  in the city of Tripoli [the capital of North Lebanon], which is currently dominated by the Salafist movement.

In light of the current political situation, this phenomenon does not bode well for Lebanon. Al-Qaeda’s presence has become prominent on the Lebanese arena to the extent that it has become part of its normal political and partisan life. At the security level, it is believed that the Syrian crisis has been spilling over into some areas of Lebanon, as clashes in the Damascus countryside and Homs are reflected in some of the towns on Lebanon’s northern and eastern border.

The Lebanese security apparatus has been trying as much as possible to hide the grim reality from the public. It has been saying that al-Qaeda’s flags flying during protests do not suggest that the organization has a physical existence in Lebanon. It rather suggests that it has more ideological supporters in certain areas. One of the Lebanese intelligence officers told Al-Monitor, “The organization’s ideological, rather than organizational, influence has been increasingly growing with the growth of the Salafist movement in certain regions.”

Interior Minister Charbel Mansour, however, does not hesitate to appear on local television to warn that “Lebanon’s security situation is increasingly worsening and that armed groups have become more present than the state in many streets and regions.”

An official Lebanese security source speaking on the condition of anonymity because of the sensitivity of the report gave this summary of al-Qaeda's development in Lebanon:

According to the security information, al-Qaeda has affiliated groups in Lebanon, which have begun to grow and engage in raging confrontations in its northern cities, mainly the clashes taking place in Tripoli against Alawites. This is not to mention the confrontations waged by Jabhat al-Nusra in Syria, especially in the rural areas of Damascus and Homs. Moreover, the security information shows that first indications of al-Qaeda public appearance in Lebanon go back to period before the eruption of the Syrian revolution between 2007 and 2011, with the growing semi-public appearance of the movement of Fatah al-Islam, Abdullah Azzam Brigades and the Ziad Jarrah Brigades.

Nevertheless, al-Qaeda has had an increasingly heavy presence in Lebanon with the growing rise of the jihadist Salafist movement within the Syrian uprising, which created some sort of a link between the jihadist Salafists in Homs in particular, and the nascent Salafist movement in northern Lebanon. It was not long before the extremely poor Sunni-dominated northern Lebanon turned into the backyard of the Syrian armed Salafist opposition and an extension of its ideological climate.

Tripoli has been the safe haven for the Arab and Asian Mujahedeen from and to Syria. The city’s seaport has served as a route for logistic armament between the Syrian opposition zones in Syria and the Libyan port of Masrata, which is controlled by a local Salafist organization.

According to this information, the rise of Jabhat al-Nusra in Syria prompted the emulation of its jihadist model by Lebanese Salafists who are active in northern Lebanon and some Palestinian camps in the process of "supporting their brothers in Syria." The information also indicates that "the Salafist arena of jihad" in Syria has started to produce an organic and organizational extension of it inside several Lebanese areas. It is noteworthy that al-Qaeda, which includes Jabhat al-Nusra, still classifies Lebanon as a "Nusra arena" (i.e., an arena to gather mujahedeen and prepare them for jihad in another).

Nonetheless, there are strong signs suggesting that Jabhat al-Nusra in Syria has started to form a branch in Lebanon, one that is linked to it and reacts according to its agenda, the current priority of which is to mobilize all energies in the battle to topple the Syrian regime.

The same information says that the Jabhat al-Nusra plan to establish a Lebanese branch is still in process, and is currently manifested on the ground in the form of groups that do not have a joint command or organizational unity.

However, the information available to the Lebanese security agencies confirms that the fragmentation among the joint al-Qaeda and Jabhat al-Nusra groups is intentional. It is part of a plan to integrate all these groups under the name "Jabhat al-Nusra-Lebanon Branch," and declare an Emir [religious commander] over it — likely not Lebanese — at the appropriate political and technical time. The latter would be linked to what the international leadership of al-Qaeda sees as an opportune time to declare the transformation of Lebanon from a “Nusra arena” to a “Jihad arena.”

The Lebanese security source has revealed that key jihadi groups may be awaiting a sign from al-Qaeda to unite under the name “Jabhat al-Nusra-Lebanon branch.” They are the following:

— A group led by "Abu Thaer," a Lebanese national named Khodor Huwailed. The group has a presence in the area of ​​Wadi Khaled and Mashta Akrum, and includes "mujahideen" of different nationalities. The main aides of Abu Thaer are Farid Sameh, a Syrian national, and Jordanian national Mohammed Khalil. The group consists of about 200 elements.

— The Tripoli group led by Lebanese national Hussam Abdullah al-Sabbagh (nicknamed Abu al-Hasan). He commands around 250 to 300 elements, through which he controls neighborhoods in the city, like Bab al-Tebbaneh, Beddawi and Bab al-Raml. The repeated rounds of violence with Jabal Mohsen, a neighborhood mostly inhabited by Alawites, are spearheaded by this group. Sabbagh’s main aide is Kamal al-Bustani, a person known for his pro-Qaeda activity.

— The Al-Qaa group, led by its Syrian emir Muhammad Khalid Hijazi, assisted by the Syrian Khalid Mohammed Turk and another person (of an unknown nationality) named Mohammed al-Qunays.