In the tense few days following the clashes between followers of Salafist Sheikh Ahmad al-Assir and the Lebanese army, many are wondering what the implications for the stability of the country will be. 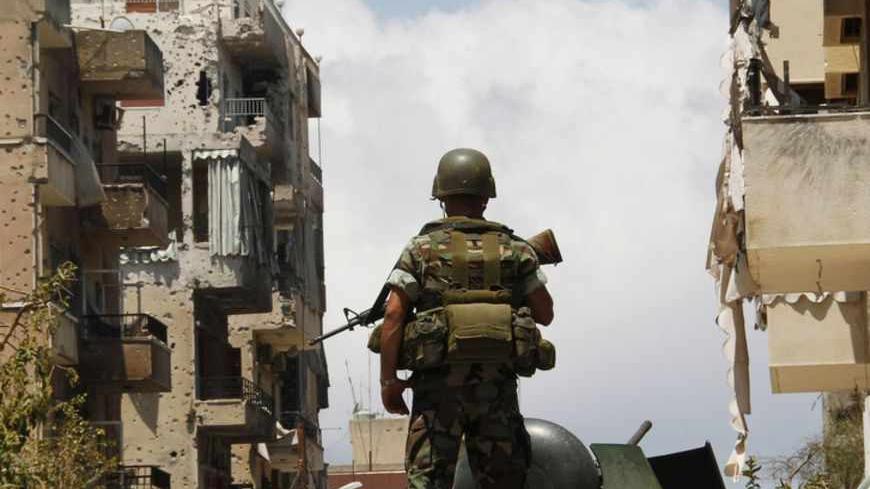 A Lebanese army soldier stands atop an armored personnel carrier as he patrols the area near the mosque complex where hardline Sunni cleric Sheikh Ahmad al-Assir was believed to be sheltering with his supporters in Abra, near Sidon, southern Lebanon, June 25, 2013. - REUTERS/Ali Hashisho

The suburb of Abra, which lies just outside the city of Sidon, the so-called capital of South Lebanon, appeared as if it could be part of Afghanistan under Taliban rule.

In this area, the radical Sheikh Ahmad al-Assir had established a security zone around the Bilal Bin Rabah Mosque, which has become the headquarters of Assir and his group. Assir's story does not differ much from those of hundreds of other similar figures who have taken center stage over the past five years in many Arab countries.

The rise of the Salafist movement in the Arab world has been the result of the sweeping Arab revolutions and the collapse of many military regimes' decades-long rules. This has led to the sudden emergence of these sheikhs, surrounded by dozens of fervent advocates, who are ready to give their lives to establish Islamic rule.

In Lebanon, this phenomenon, which is based on the righteous Salaf (the first three generations of early Muslim times or the lives of the companions of the Prophet Muhammad), has begun to establish itself since the outbreak of the Syrian revolution.

Assir is considered one of the main models of the Salafist movement in Lebanon. As expected, clashes broke out on Sunday, June 23, between Assir’s group and the Lebanese army. The army had been trying to avoid such a confrontation, which provoked a wave of media criticism. However, the army declared that Assir crossed all red lines when his advocates killed two army officers at a checkpoint without any reason whatsoever.

Military operations were launched to put an end to the situation in Sidon, but the human cost was high. After nearly 48 hours of fighting, around 80 army soldiers had been either killed or wounded.

Meanwhile, Assir and his group used the citizens living in the buildings surrounding the Bilal Bin Rabah Mosque as human shields, aiming their sniper fire at the army and hindering its progress. The longer the fight drags on the more bitter its political and security consequences throughout Lebanon. The army is not fighting on solid ground, but amid difficult conditions.

In fact, the army is not supported by a political decision because the Lebanese government is limited to managing day-to-day state affairs and is divided on a sectarian basis. The Sunni ministers within the government have been supporting the army, but not to the extent that this support could provoke the Sunni public. The latter could embark on the path of extremism should the clashes with Assir expand to reach Tripoli, the Tariq al-Jadideh neighborhood in Beirut or Naameh on the coastal road. All these regions have witnessed situations similar to the "Assir phenomenon.”

Many fear that the expanding clashes could be spurred on by false slogans calling to defend the Sunni community. This is very likely to happen in a country like Lebanon, where sectarian masses could respond to such calls. This is especially true in light of the sharp sectarian divide gripping the region.

Nevertheless, up until this moment, most Lebanese are convinced that the army has been fighting to preserve security and stability in Lebanon. The army is well respected and valued among Lebanese citizens of all sects. Yet the fear remains that Lebanon could be dragged into the war raging in Syria. It is at this point that it would be difficult to predict the turn of events.

While the clashes between the army and Assir’s radical groups — backed by foreign jihadists, Palestinians and Arabs — have intensified, Assir has called upon the Sunnis in the army to defect and fight alongside Sunnis against the army. These calls for defection did not find an echo within the army’s ranks even though some Salafist websites in Lebanon and Syria asserted the defection of many Sunni officers.

Most Palestinian groups in the Ein el-Hilweh Palestinian refugee camp also refused to respond to Assir’s calls, with the exception of some extreme individuals. Fatah al-Islam and Jund al-Islam share ideological links with Assir, and although these groups constitute a small segment of the camp forces, they have military savvy and are threatening to drag the refugee camp into a clash with the army, repeating the scenario of the Nahr al-Bared camp, which played out a few years ago.

The army is trying to end the situation in Sidon amidst popular sympathy. On the other hand, Salafist groups across areas of Lebanon, especially in Tripoli (the capital of the North, with a Sunni majority) continue to downplay this sympathy and promote clashes so as to drag the country back into a civil war.

Nasser Chararah is a contributing writer for Al-Monitor's Lebanon Pulse and for multiple Arab newspapers and magazines, as well as the author of several books on the Hezbollah-Israeli conflict.