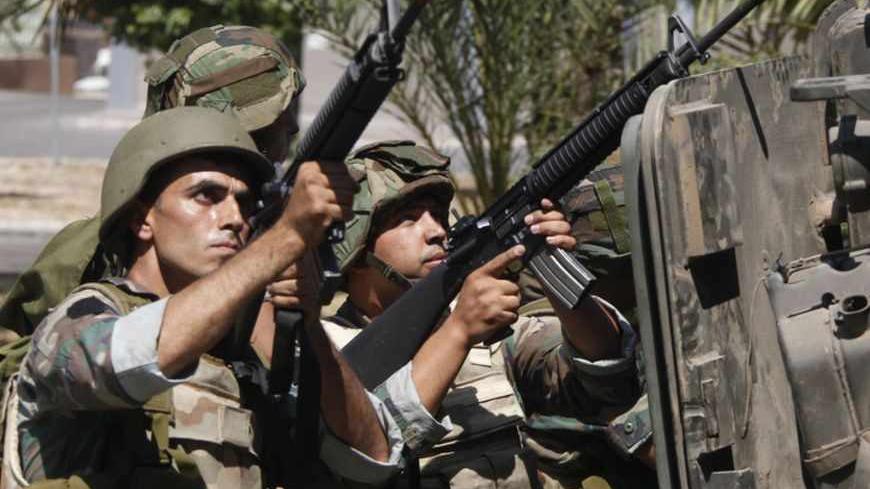 A number of fundamentalist Sunni militants affiliated with Salafist cleric Sheikh Ahmad al-Assir attacked a Lebanese army checkpoint in the area of Abra, a stronghold of Assir where the mosque from which he leads his Sunni Salafist movement is located.

The movement led by Assir has been causing tension, concern and insecurity in this sensitive area situated at the entrance to southern Lebanon, and along the highway that links the south to the country's capital, Beirut.

The Assir phenomenon began two years ago, with a series of sermons delivered by the Sunni Salafist preacher against the Shiite Hezbollah party and Christian forces. His escalatory stances won him a fundamentalist Sunni popular base in the city. Subsequently, Assir blocked the highway in Sidon in July 2012 for a whole month, under the slogan of “rejection of the arms of Hezbollah.” The highway was reopened on Aug. 1, 2012, under political and popular pressure.

Assir was accused of receiving funding from Gulf countries, and became a thorn in the side of the Shiite Hezbollah in a key area for Hezbollah between Beirut and the south. However, Assir continued to stoke the flames, in all directions and at different levels, which often turned him into an object of ridicule.

He once delivered a sermon at his mosque while holding a toy rifle. He told his Salafist supporters that the rifle was made in Iran and releases an audio in Arabic saying "kill Aisha" — Aisha is one of the wives of Muslim Prophet Muhammad, and is a subject of historical dispute between Sunnis and Shiites. It later turned out that the toy had nothing to do with Iran or Assir’s claims. It is manufactured in China and says in English, "Kill the hostages."

Once again, Assir called on all his supporters to volunteer to fight in Syria against President Bashar al-Assad. Following his call, his aides announced that his son had answered the call of his father and went to fight with the insurgents in [the Syrian town of] Qusair, and that he suffered a shrapnel wound in the abdomen. The following day, however, the doctors who treated Assir’s son in a hospital in Sidon said that he was being treated for an intestinal disease, and that the wound in his stomach did not come from shrapnel in a battle, but an endoscopy he had undergone.

Despite these bizarre incidents, Assir continued his confessional and sectarian incitement. He later started to incite against Lebanese state institutions, namely the Lebanese army, whom Assir has consistently accused of standing with Hezbollah against him. More than once, Assir’s militants have caused security tension and shooting incidents in Sidon and its surroundings.

On Feb. 26, Assir held a news conference at his headquarters, announcing that he was giving the Lebanese government a two-day deadline to fulfill his demands. He claimed that Hezbollah is besieging him in Sidon through Shiite residents of the city. Clearly, Assir’s threats were a demand to the Lebanese government to expel [Shiites] from Sidon, or at least keep them far away from his headquarters. He has also made other demands aimed at initiating a conflict against Hezbollah, and threatened to take a series of steps on the ground if they were not met. After two days, Assir backed down from his threat.

On June 17, he repeated his threat, and [his followers] opened fire at a Lebanese Army vehicle. The incident was followed by an ultimatum issued by Assir for the Lebanese army to fulfill his demands before Monday, June 24. However, Assir made his surprising [move] on the last night of the deadline he had set. On Sunday, June 23, at 2:20 pm, gunmen affiliated with Assir opened fire on an army checkpoint in Abra, leading to the death of two army officers and at least 10 soldiers.

Assir also made calls on his social networking accounts for Sunni members in the Lebanese army to defect and declare military officials infidels. At the time of writing this report, Lebanese army units were surrounding Assir’s headquarters, amid violent clashes with his gunmen. Amid unclear details surrounding the siege, three questions arise:

by Haitham EL-TABEI with AFP correspondents in the Middle East | AFP | May 17, 2022
END_OF_DOCUMENT_TOKEN_TO_BE_REPLACED