Beirut on Edge After Nasrallah Speech

The speech by Hezbollah Secretary-General Hassan Nasrallah on Feb. 26 holds many similarities to his speech on May 6, 2008, writes Jean Aziz. 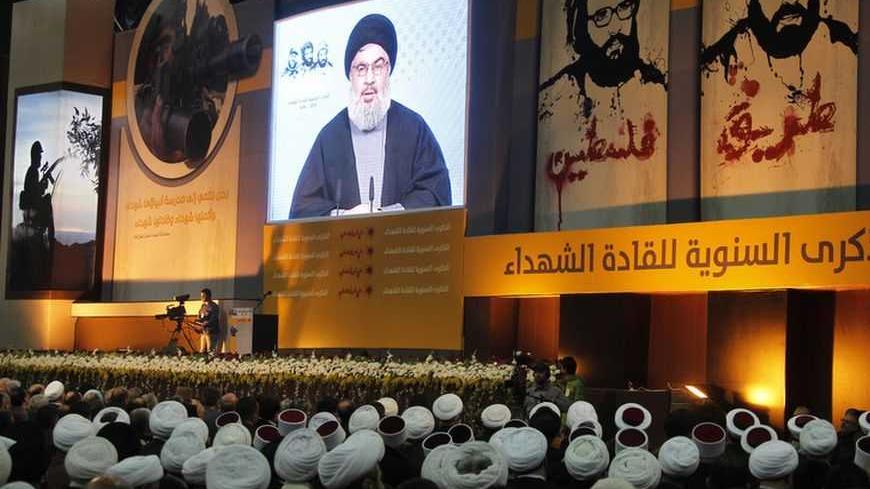 Beirut seems on the verge of exploding. The escalating political and security developments have reached a critical stage. Hezbollah Secretary General Hassan Nasrallah said on Wednesday [Feb. 27] that “a few days may separate us from sedition.” Everything indicates that the May 7, 2008 events may be repeated.

The tension in Lebanon has been steadily rising for the past several weeks. But in the last few days, tension has reached a critical stage. The two sides of the confrontation are the Shiite camp led by Hezbollah on the one hand and the Sunni Salafist fundamentalist camp on the other. Yet the confrontation between them is the result of what’s going on outside the Lebanese context. There is the Syrian civil war, the regional and international arm-twisting with Iran, and the Sunni-Shiite war throughout the Islamic world.

A new factor, however, has appeared on the Lebanese scene: the Sunni Salafist leader, Sheik Ahmad al-Assir. In a news conference he held on Tuesday, Feb. 26, at his headquarters in Sidon, southern Lebanon, the Salafist leader said that he gives the Lebanese government until Friday, March 1, to abide by his demands: He claims that Hezbollah is holding him under siege in Sidon by using the city’s Shiite residents. It was clear from Assir’s threats that he was asking the Lebanese government to get these people out of Sidon, or to at least remove them from around his headquarters. He made other demands that fall within the context of the conflict that he started against Hezbollah. He said that if his demands were not met, he would take a series of steps on the ground, most notably to cut the road linking Beirut to the south, in the direction of Sidon.

Of course, the government cannot meet these demands. The Salafist sheik had cut that same road in July 2012 for about a month. It was reopened in August under political and popular pressure against him.

But the fundamental problem in Assir’s threat is that it would cut off Hezbollah’s areas from each other, especially Hezbollah’s necessary and vital logistical links between its stronghold in the southern suburbs of Beirut and its operational, geographical and popular extension in southern Lebanon. Note that other Salafist groups allied with Assir may plan to do the same thing in the central Bekaa Valley. That would cut two other vital arteries to Hezbollah: the road between the south and the Shiite parts of the Bekaa, and the road between Beirut and Damascus, where resides the Syrian regime, the most prominent ally of the Lebanese Shiite organization.

It seems that Hezbollah evaluated Assir’s threats and found them serious. In fact, Hezbollah found Assir’s threats to be an important step in the mission entrusted to him: to lure Hezbollah to an internal battle and to sectarian strife, no matter the price.

Assir made gradual preparatory steps before he made that move. His gunmen and Hezbollah clashed in Sidon on Nov. 11, 2012, after he demanded that Hezbollah posters be removed from the area. Two people were killed. Assir’s moves continued apace until his latest demand to cleanse the area around his headquarters from Shiite residents and his clashes with them on Feb. 23.

It seems that Hezbollah has decided to give a final warning. Nasrallah gave a televised speech on Wednesday afternoon. He denied media rumors that he was ill and had been transferred to Iran. He also issued a stern warning: He said that the sectarian incitement will inevitably lead to an explosion, which may only be a few days away. He called on those with good intentions to act before it is too late.

Nasrallah’s speech was similar to his speech on May 6, 2008, when Lebanon was in a presidential vacuum. Parliament had failed to elect a successor to President Emile Lahoud, who left the presidential palace at the end of his mandate on Nov. 24, 2007.

Thus, after several months of sectarian tension, a series of clashes between Sunni and Shiite gunmen started in Beirut and its suburbs. Nasrallah appeared on TV and said that sedition was approaching and that he had decided to prevent it. In the hours following his speech, Hezbollah elements spread throughout Beirut and other areas, and quickly settled the matter. They eliminated the presence of all Sunni armed militia elements that followed former Lebanese Prime Minister Saad Hariri’s Future Movement. Dozens of people were estimated to have been killed.

That clash paved the way for Arab and international mediation, which ended in a conference for the various Lebanese parties in Doha two weeks later. The conference culminated in an agreement to elect as president then Army Commander Gen. Michel Suleiman.

Nasrallah’s speech Wednesday holds many elements from that scenario. Lebanon is approaching a parliamentary vacuum. Parliament is divided and unable to agree on a new electoral law. Security tensions are growing side-by-side with political ones. However, there is one element missing in the current situation. Namely, all regional countries are unable to play the role of mediator, as a result of the sharp polarization caused by the Syrian war. The West in general wants stability in Lebanon but not to the point that it would have to invest a lot of effort to ensure that stability. Therefore, the current situation is highly volatile and things are changing by the hour.