Following the conflict in the town of Arsal, the doubt and distrust between Sunni and Shiite political groups in Lebanon have spread to the military, writes Elie Hajj. 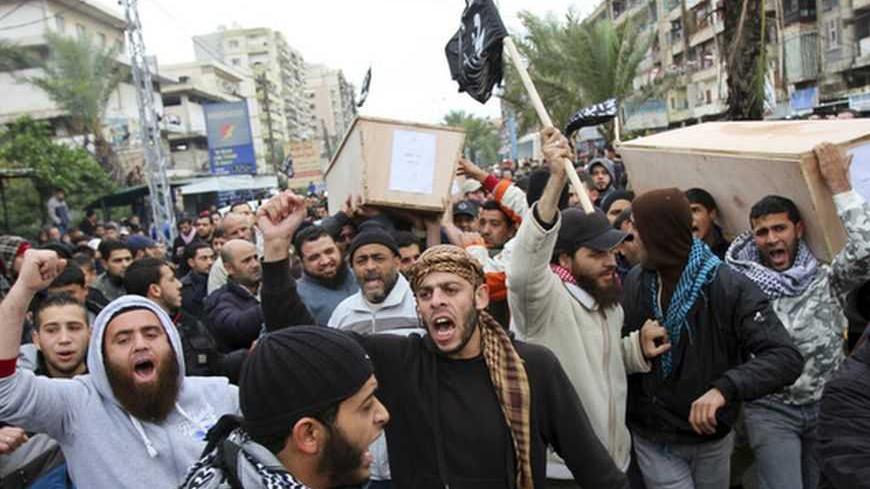 Large or small, every incident in Lebanon these days takes on a sectarian dimension which in one way or another is connected to the crisis in Syria. In some areas the country’s large Sunni population interacts with the revolutionaries in its neighboring country and occasionally provides them moral and material support. Meanwhile, the country’s large Shiite community supports the Syrian regime in much the same manner.

Both communities have had to repeatedly bury the bodies of men killed in clashes inside Syrian territory. Most recently Hezbollah mourned the death of one of their own last Saturday, which stated that he was “martyred while performing his duty of jihad,” and failed to give any further details.

As for the Lebanese Sunni militants who died in Syria, it later became clear that they were not part of an organized group. They had traveled to Syria sympathetic to the rebels’ cause having been inspired by the sermons of imams in Tripoli. In fact Tripoli, the second-largest Lebanese city and the capital of the north, is teeming with Sunni Islamist organizations, which receive material support from a variety of political figures. The Future Movement still maintains the strongest popular presence there, as is the case in Akkar and in every other area in Lebanon, which hosts a large Sunni population, including Beirut, Sidon and some parts of the Bekaa.

Saad al-Hariri, leader of the Future Movement, draws in considerable support for his sect. He manages this despite his long stay abroad in Saudi Arabia, the decline in the financial capacity of his movement, and the political and media campaigns waged against him by his rivals.

At its core, the political impasse between the two major Sunni and Shiite organizations — the Future Movement and Hezbollah — can be traced back to the 2005 assassination of former Prime Minister Rafiq Hariri. The Future Movement maintains that elements affiliated with the security apparatus of Hezbollah were involved in the killing of Hariri in a large blast on Feb. 14 of that year. This reading of events has long been purported in the media and by the movement’s leadership and representatives in parliament, an allegation which was reinforced when the Special Tribunal for Lebanon indicted four individuals from Hezbollah’s security apparatus with involvement in the assassination.

Hezbollah leadership rejected this accusation and refused to hand over the four indicted individuals, claiming that the tribunal was nothing but an American-Zionist tool. The events and developments which followed the assassination of Hariri only served to deepen the chasm of distrust dividing the two sides.

There is another factor that gives the Sunnis cause for concern. From 1990-2005, after the conclusion of the so-called Lebanese Civil War, the Syrian Army held de facto dominion over Lebanon. During these years, the successive leaders of the Lebanese Army established strong bonds with Hezbollah. This close relationship was reinforced by successive governments, even the governments of Prime Ministers Rafik Hariri and Saad Hariri, by passing legislation, which established coordination between Hezbollah and Lebanese Army and including this in their platform for ruling.

Hezbollah’s influence surpasses that of all the other Lebanese political groups combined, and even that of the institutions of the state, and thus the flawed balance of power always tilts in its favor. In this context, and coupled with the difficult circumstances at the time, Mr. Hariri and his allies were not able to even research the relationship between the army and Hezbollah, whose ownership of arms was legitimized by the state, under their “right to resist [the enemy].” It is on these grounds that the army is forced to deal with Hezbollah to protect Lebanon from Israel.

The 2005 joint-announcement of reconciliation and alliance between Hezbollah and the Free Patriotic Movement, led by Gen. Michel Aoun, aroused the concerns of those from the Future Movement, especially the religious hard-liners among them. These included parliament members from the North, such as Mouin el Merhebi, Mohammed Kabbara, and Khaled El Daher. They view the military leadership as a group with great sway over Lebanon and that is hostile to the country’s Sunnis. High-ranking officers occupy key military positions, such as the Directorate of Intelligence and Directorate of Orientation, and these offices interact in one way or another with Hezbollah, the Syrian regime, and Gen. Aoun.

Thus, when the leading Sunni cleric Sheikh Ahmed Abdul-Wahed and another sheikh traveling with him were killed at a Lebanese army checkpoint in Akkar last May [during an exchange of fire], Future Movement MPs did not hesitate to accuse the officers at the checkpoint of assassinating the clerics. They claimed that the motive for the assassination sprang from Sheik Abdul-Wahed’s active support for the Syrian revolution and the general support for the revolution in the border areas of Wadi Khaled and Akkar. This incident nearly ignited sectarian clashes between the Muslims and Christians of Akkar, were it not for the intervention of Lebanese Forces Party chairman Samir Geagea in the Maronite town Kobayat. The matter was finally resolved when March 14 Coalition members brokered an agreement between the army leadership and the families of the two dead sheikhs; three officers were jailed for several weeks and then discretely released.

However, the Future Movement and its allies continued to feel that top military officials were waiting to ambush them because of their ties with Hezbollah, the Syrian regime and Gen. Aoun. Perhaps the most pertinent example of this notion came after the attempted power grab by the Lebanese military last Friday, when it apprehended a suspect in the town of Arsal on the northern border with Syria.

The army command issued a statement that a military patrol was attacked while attempting to apprehend the wanted person of Khaled Ahmed Humaid, during which the wanted was killed along with Capt. Pierre Bashalani and Sgt. Ibrahim Zahraman. In response, the residents of Arsal and the town’s mayor, backed by the Future Movement, insist that dozens of people from Arsal attacked the patrol under the impression that they were Syrian regime forces or a Hezbollah militia after the security apparatus had stated that it was not responsible for the patrol. Photographs were later published in response, which showed the dead, wounded, and detained soldiers wearing their military uniforms.

However what is transpiring behind the scenes is the most worrisome. Apparently there is a plan at work on the ground, in political corridors, and within the media designed to strike the Future Movement and Sunni hardliners in Lebanon, which is based on the following:

Plotting the events in Arsal and provoking a response from the locals, which in turn allows them to claim that Arsal is a hotbed of fundamentalist jihadists, specifically from the Syrian Jabhat al-Nusra.  The objective of all this is to seal off Arsal and prevent its people from supporting the rebels in Syria. It justifies Hezbollah’s weapons by saying that there are illegal hotbeds, which pose security threats outside the areas controlled by Hezbollah. This will require political action on the basis that there is targeted community in Lebanon.

Residents of Arsal claim that the military patrol included Hezbollah personnel, citing evidence that others were killed aside from the sergeant and the captain. One of the dead could possibly be the man for whom Hezbollah held a funeral in Arabsalim in the south on Sunday, whom they claim died in Syria.

They exaggerate the actions of Sheikh Ahmad al-Assir and his tourist convoy to the mountains of the Keserwan District a week ago to make him appear as if he speaks for the Sunnis when in reality he does not. In response they organize popular movements in support of the army and its leadership in Christian and Shiite areas, as happened after the killing of Sheik Abdul-Wahed in Akkar. They also launch a media campaign targeting and insulting a particular Lebanese group.

According to members of the Future Movement, the most important aspect of the plan is to contain Prime Minister Saad Hariri’s initiative announced on television last Thursday from Paris, imperiling the Parliamentary Election Act more than any day previous.

It is worth recalling that Sunnis in Lebanon make up about 40% of the army’s officers and soldiers. Prime Minister Najib Mikati cannot protect his community from being targeted. This carries great significance in a country as complex in its sectarian balancing and internal and external alliances as Lebanon.