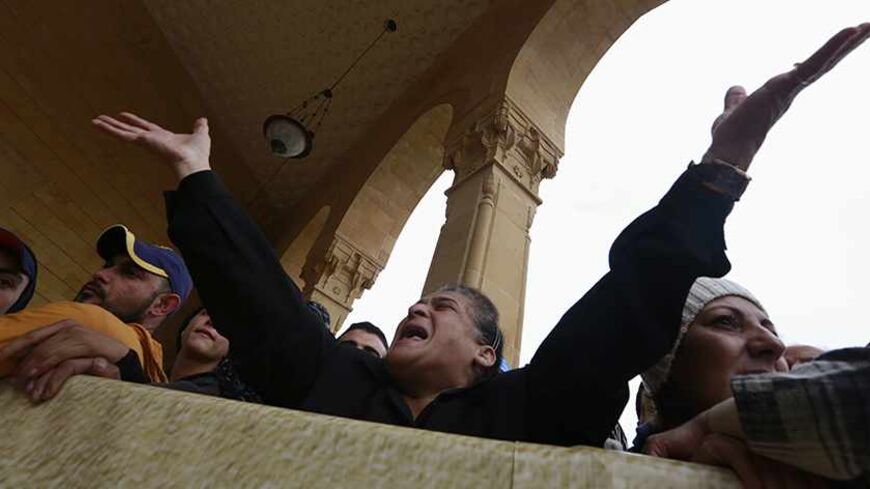 A woman reacts during a mass funeral for former Lebanese Minister Mohammed Chatah, who was killed in a bomb blast on Dec. 27, at Al-Amin mosque in Martyrs Square, downtown Beirut, Dec. 29, 2013. - REUTERS/Jamal Saidi

The year 2013 ended with a violent blast in Beirut a few meters from where Rafik Hariri was assassinated on Feb. 14, 2005, an event that changed the face of Lebanon. The explosion was also near the headquarters of Saad Hariri, the symbol of the excluded Sunni leadership.

The blast killed Mohammed Chatah, a prominent figure in the March 14 movement who was close to Saad Hariri, and a man characterized by moderation and diplomacy. All crimes and bombings are brutal, but this crime encapsulates the deep crisis of the Arab Levant and presages some dark days.

The blast looks like all the earlier bombings and political assassinations. It is as if they all carry the same signature. Rafik Hariri was a Sunni leader who wove a web of international relations and was the guarantor, even if at a minimum, for Lebanon’s stability. He also provided some counterbalance to the powerful Iranian-Syrian axis.

Before Chatah, Wissam al-Hassan was killed. He was a security chief who set up the information branch of the Lebanese Internal Security Forces, which formed a security system that, until his assassination, provided a small balance in the face of Hezbollah’s security and military apparatus.

It is true that bombings carried out against innocent people and terrorist acts do not target a single neighborhood, party or sect; the language of madness and terrorism has been dominant since the fire of the Syrian war reached the Lebanese interior. But it is also true that political assassinations in the past eight years have targeted just one Lebanese side: the March 14 movement. It is hard to believe that this is a coincidence.

The crime comes just before the Special Tribunal for Lebanon starts its hearings in mid-January 2014, in which the tribunal will try those accused of killing Rafik Hariri. The March 14 movement claims the tribunal aims to reveal the truth and deter crime, especially political ones.

Does the bombing constitute a response to the start of the tribunal and to all who sought it or wagered on it, or is it a message that nothing can stop the assassinations, neither tribunals, investigations nor international resolutions?

The crime’s timing is also linked to Syria’s events, which today include events in Lebanon and Iraq. All these countries are mired in what looks like a sectarian war. The Syrian war caused the Iraqization of Lebanon a while ago. Rival regional powers are sending messages to each other via explosions, and are using various militias and jihadist groups as agents.

There have been recent bombings in the mainly Shiite southern suburbs of Beirut, the latest occurring on Jan. 2, 2014, on one of the suburb's busiest streets. Those bombings constituted a response to Hezbollah’s decision to fight in Syria. Shortly after the earlier bombings in the southern suburbs, twin blasts shook the Sunni city of Tripoli. It seems like the principle of “an eye for an eye, a tooth for a tooth” is being applied.

These bombings may not be linked to each other, but the fact that they happened within the context of terror and counterterror and inflamed sectarian feelings may open the gates of hell on that small country.

Chatah was targeted because he was a symbol of moderation at a time when loud voices of extremism dominate.

The Arab Spring, which originally meant popular revolutions demanding basic rights and political participation, turned into a conflict between religious groups and repressive regimes. That’s what happened in Egypt, and in Syria, where the regime found that by fighting fundamentalism it can justify its existence and justify its Hezbollah ally, redirecting its weapons away from Israel and toward the Arab world’s interior.

Some accuse the Syrian government of releasing jihadists to perform a specific mission. The extremists then found a golden opportunity and an empty arena to achieve their dream of ruling. Those arenas were left empty by the international community’s decline, or rather, in it not performing its duties, including respecting human rights, ending the massacres and crimes and enforcing the law.

It may seem cynical, but the bitter reality is that the prevailing forces are in two camps: either secular repressive forces; or jihadists, takfiris and mumanaa [anti-Western defiance] types. And neither camp is shying away from using terrorism and accusing the other camp of treason.

Ironically, although the two battling camps are absolutely hostile to each other, they both are in a de facto existential alliance because they justify each others’ existences. This duality is based on extremism and the logic of eliminating the other. There is no room for a third party like Chatah, who is a voice of reform, democracy, political participation, reason and moderation.

Now is not his time. Now is the time for madness and relentless sectarian war. The road of reform and progress has given way to a race to hell. One of Chatah's last tweets was: “NEEDED: an alliance of all who oppose political Islamism (both Shiite & Sunni versions) but equally reject secular despotism as an alternative.”