January 2014 will include three significant events for Lebanon related to the formation of the new government, the Special Tribunal for Lebanon and the Geneva II Syria Conference. 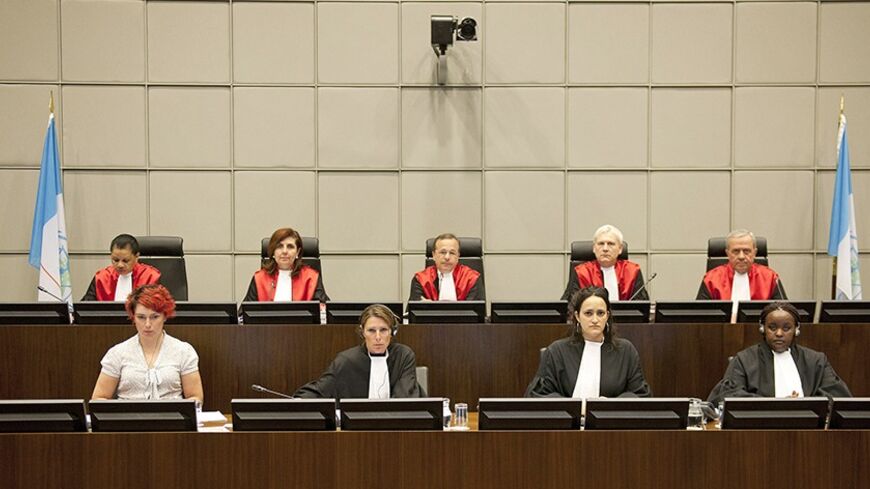 Judges of the UN Special Tribunal for Lebanon (STL) attend the opening of the public hearing at the court in Leidschendam, near The Hague, June 13, 2012. - REUTERS/Robert Vos

January in Lebanon will be unusually hot, as a result of three imminent events that might transform it into the most heated political month ever, or maybe even herald the start of a frenzied year on more than one front.

The first such event is an internal constitutional one, as the country enters the countdown period for the formation of a new government. This comes more than nine months after the resignation of the previous one led by former Prime Minister Najib Mikati. The prevailing political atmosphere points to President Michel Suleiman and Prime Minister-designate Tammam Salam leaning toward announcing a cabinet makeup in January; an eventuality believed driven by constitutional deadlines and upcoming events. For the new government has, according to the constitution, only 30 days to secure a parliamentary vote of confidence, otherwise, it too will be considered resigned. In other words, if said cabinet did manage to see the light by the end of this month, it would not assume its full responsibilities until the beginning of March. On the other hand, the period defined by the Constitution to elect a new president begins on March 25. Therefore, any delay to this schedule would engender further complications and threaten to lead to even more harmful political and constitutional repercussions.

Yet, it also seems apparent that the main two opposing factions in the country have yet to reach an agreement on the formation of the cabinet. As a result, the inevitability of a new cabinet being announced, becomes tied to another inevitability: that this announcement will surely lead to a new confrontation between the two parties to the crisis. In turn, this portends an escalation of the political battle during the coming three weeks in Beirut. Some say that this escalation has already begun, as evidenced by rumors about the postponed announcement of the new government; following the latest suicide bombing that targeted the city’s southern suburbs on Jan. 2, which came to confirm the theory of causal connectedness between political entitlements and security incidents.

The second upcoming event is tied to judicial and security considerations, both internal and external. It will arise when trials begin in The Hague in mid-January, as part of the proceedings by the Special Tribunal for Lebanon. This tribunal was established more than four years ago, pursuant to a  UN Security Council resolution. The tribunal became, since its inception, added cause for division between the Lebanese, as each of the opposing parties viewed it from diverging perspectives.

One faction saw in it a clear condemnation of Hezbollah, five of whose members are accused by the tribunal of participating in the assassination of former Prime Minister Rafik Hariri. The other faction only considered it a manifestation of international manipulation of the Lebanese arena, as evidenced by the international investigation’s involvement in the case of the “false witnesses.” The latter’s fabricated statements led to the establishment of the tribunal and the arrest of Lebanese nationals. It was later discovered, however, that there was no evidence of their involvement in the crime.

In light of these two opposed points of view, the date when trials begin will also be the date when the divisions between the Lebanese will again rise to the forefront. But, more dangerous even, is the long-standing impression that every crucial development in the operations of this special international body has led to grave and bloody security escalations in Lebanon. Both sides are convinced of this observation, even while each of them espouses a different point of view as to the reasons and circumstances behind it.

Yet, in the end, both factions raise their level of caution every time a new deadline approaches in the proceedings of the International Tribunal; the next anticipated major event being the start of trials later this month. The apprehension of both sides proved true lately, as an explosion killed former Minister Mohammed Chatah in Beirut on Dec. 27. This was a new assassination that strengthened each side’s conviction in its own perception, but which made both sides, and the whole country, fearful of any upcoming escalation that might accompany the start of trials in the middle of the month.

The third upcoming event is external, security-oriented and military in nature. It is the date when the Geneva II conference will be held to discuss the Syrian crisis; which also is seen as a Lebanese event par excellence. All those involved in the Lebanese crisis draw links between the developments taking place in Damascus, and those occurring in Beirut. The Lebanese faction that backs the Syrian opposition is of the opinion that the approaching conference date will drive regime forces and their supporters — among them Hezbollah, as they claim — to push for a military escalation on the ground. This would be aimed at achieving added advances, to send a clear message to participants and sponsors of the Geneva Conference that the regime would not surrender, through negotiations, anything it managed to hold on to during the past three years of bloody conflict. While the faction that opposes the Syrian militants considers that the opposition and its foreign sponsors would endeavor, as Geneva II looms closer, to escalate matters on the ground. This is to pressure Hezbollah into withdrawing from Syria, or include the issue of Hezbollah’s involvement in the fighting to the negotiations’ agenda; a manifestation of which, this same factions contends, were the series of suicide bombings that rocked Shiite neighborhoods of Beirut. The latter began with the Iranian Embassy bombing last Nov. 19, to the succession of explosions that targeted the southern suburb of the capital.

These three looming deadlines lead all parties to the Lebanese crisis to believe that January 2014 might not be a month of extreme cold for Beirut, but another heated chapter in the region’s volatile confrontation.