Various domestic and regional developments, most notably the first session of the Special Tribunal for Lebanon to be held this week, could be the necessary spark for Lebanese factions to finally agree on a government. 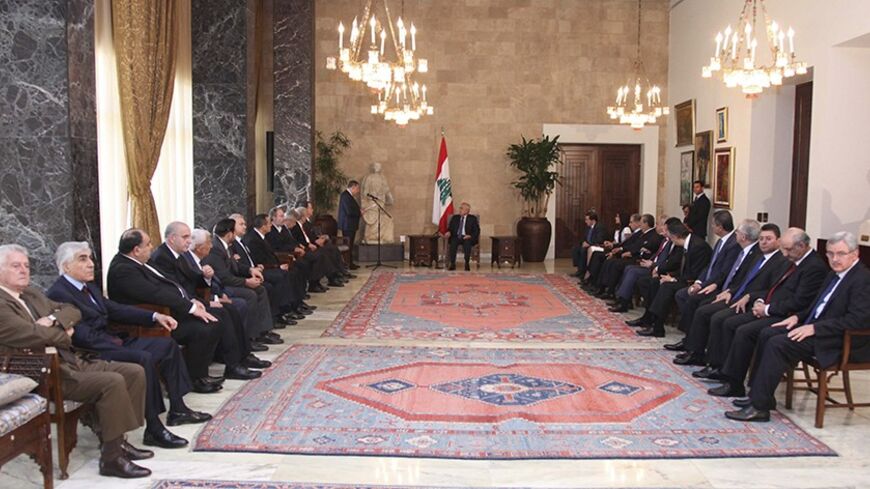 Lebanon's President Michel Suleiman (C) meets with members of the March 14 coalition at the presidential palace in Baabda, near Beirut, June 18, 2013. - REUTERS/Dalati Nohra

Suddenly, the formation of the Lebanese government was set in motion again, giving rise to cautious optimism about the return of constitutional life to this small country.

One would naturally ask about the reasons behind this recent motion: Have regional power balances changed and been positively reflected on the Lebanese parties, shaking them awake and leading them to show keenness in avoiding institutional vacuum, ending stagnation and governing the affairs of the country and its citizens? Or are there imminent milestones on the international and regional levels rendering the shielding behind the Lebanese state, its legitimate institutions, and national partnership — dubbed mithaqiya — a need? Mithaqiya refers to the concept that the Lebanese state was built upon, a national pact — or mithaq — between various sectarian groups to form the Lebanese nation. It is a concept evoked when one party’s interests are not met, and it has become synonymous with obstructing —  or even turning against — the state.

The formation process was faced by the stiffness of the two political camps concerned with forming a government comprising all parties. The March 14 camp insisted on forming a neutral government, in the event that Hezbollah did not withdraw from the war in Syria and end its support for the regime. For its part, Hezbollah insisted on a “blocking third” in the cabinet, granting the party the ability to veto any governmental decision. It also insisted on the ministerial statement (policy) including the concept of “people-army-resistance”, which legitimizes the role of the resistance, i.e., Hezbollah’s arms, and wards off any talk about its disarmament.

This subject has proved to be an insurmountable obstacle since the withdrawal of Syrian forces from Lebanon in 2005. Many cabinet-formation proposals were set forth, including Hezbollah’s 9-9-6 formula, ensuring both camps have a blocking third, and the 8-8-8- formula, giving equal number of ministries to both parties as well as moderates. However, there were disputes about who are the real moderates, and inventions like a king-minister or a deposit-minister, in addition to definitions and names given to the government that has yet to be formed, such as a “de-facto government” or a “preventive government.”

All of these inventions and ruses — needless to say none of them are mentioned in the constitution — were an exercise in futility. In fact, they contradict the constitution and the concept of institutions, since they go around the crucial national consensus over the values that institute the social contract, on top of which the state is the exclusive holder of arms. The issue of forming a government remained unsettled and the untold secret is that both camps are sticking to their guns, keeping an eye on the Syrian crisis and the parallel international movement and waiting for a change in the power balance, wishing it would tip to their favor so as they would not have to use their cards.

Currently, the variable is the stance of Hezbollah. A few weeks ago, its secretary general addressed the Lebanese people, saying that the only choice for the other camp is accepting the 9-9-6 formula, ruling out the possibility of achieving a potential settlement by assertively uttering the word “full stop.” However, he is now altering this stance and showing readiness to discuss the 8-8-8 formula, hinting, as some newspapers reported, that he is not insistent on the concept of “people-army-resistance” being mentioned in the ministerial statement.

What happened and why was there this change in stances? Has he really given up on the blocking third and the king-minister? Has he really accepted the principle of ministry rotation, even though his allies are insisting on preserving specific ministries? Is he indeed ready to discuss the issue of weapons and the party’s involvement in the Syrian war? Is there a change in the regional and international situation compelling him into changing his approach? Or are we witnessing a new maneuver that will usher in further vacuum and rifts?

In fact, Hezbollah’s insistence on forming a political government and its refusal of a neutral or technocrat government unveils the party’s need for two covers: the first is the legitimacy of the Lebanese state, and the second is the national partnership, notably the Sunni one, which allows the party to face the upcoming phase. Accepting the golden trilogy of the resistance is nothing but a verbal concession. It is a mere classic practice used by Lebanese politicians to blow slogans out of proportion in the media so they can barter these slogans when the time is right.

Hezbollah’s current participation in a unilateral government and its acceptance of a neutral government, in which the party will not participate, will partially contribute to its isolation. If the party remained alone, it alone would bear the burden derived from the paralysis of state institutions and Lebanese involvement in the fighting in Syria. If it leaves the government, in the event that the president has no choice but a neutral government, it would also remain on its own facing the coming milestones, at which point Hezbollah might be at the heart of their turmoil when the sessions of the Special Tribunal for Lebanon start off next week in The Hague.

Hezbollah is the first concerned party in terms of the tribunal. Some of its members are wanted by international justice. In the same context, the March 14 camp has demanded, among the conditions imposed to accept the participation in the same government with Hezbollah, the extradition of these members to the international tribunal. Perhaps, given the course of action in The Hague, Hezbollah is showing flexibility in forming the government.

The international conviction of Hezbollah could add to its internal isolation if the party found itself in a resigned government, even if its allies are in it, or alone outside the government in case a neutral government was agreed upon. This can limit the activity of Hezbollah in Syria and Lebanon as well as its ability to defend itself on the international level and before the Arab and Islamic public opinion.

The tribunal issue may also put the Iranian sponsor in a delicate spot, especially since Iran is striving to make a success out of the deal with the United States and integrate it into all issues in the region without solely limiting it to the nuclear issue. In parallel, Tehran is trying to normalize relations and calm things down in the Arab world, which is angry about ongoing developments in the Syria war. And perhaps this is what led the Iranian foreign minister, speaking from Beirut yesterday, Jan. 13, to say that a dialogue with the Arab countries is necessary, and Iran's participation in Geneva II (thus acknowledging its regional role) could help in finding a political solution to the conflict in Syria.