As the ninth anniversary of the March 14, 2005, demonstrations in Lebanon approach, the March 14 movement is faced with both challenges and opportunities. 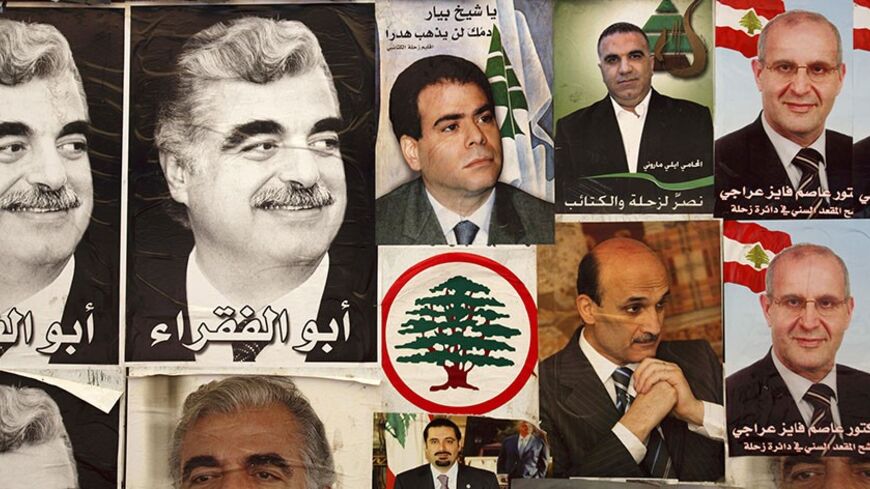 Future Movement campaign posters featuring members of the March 14 alliance are displayed on the walls of a tent in the Bekaa Valley, June 5, 2009. - REUTERS/Steve Crisp

The March 14 camp will soon celebrate the ninth anniversary of an unprecedented day in Lebanon’s ancient as well as modern history. On March 14, 2005, more than 1 million people, or close to one-third of the Lebanese population, took to the streets and filled the squares carrying a single banner: the Lebanese flag. They did this as an expression of their longing for freedom and independence, on a day that was the culmination of the Cedar Revolution, which astonished the world and surprised even the Lebanese themselves.

No doubt, the spark of that revolution was the assassination of former Prime Minister Rafik Hariri, and those who participated in the demonstration no doubt were demanding the end of such crimes and the ouster of the tutelage regime (Syria) accused of the assassination. Yet, it must be said that the masses were provoked into breaking their silence and taking to the streets on that day by the “Thank you, Syria” demonstration organized by Hezbollah a few days prior, on March 8 of that same year.

From its onset then, the March 14 demonstration came as a reaction to the March 8 one that expressed support for Hezbollah and Syria. And the ensuing March 14 political movement was but a rejection of the tutelage regime and its trespasses, nay, its many crimes even, and a rebuff of the policies espoused by Syria’s main Lebanese ally, Hezbollah. The Cedar Revolution grew in the early months of 2005, until the Syrian regime was forced to withdraw militarily from Lebanon in April of that year. However, it returned politically in the following years, taking advantage of the military and popular leverage supplied by Hezbollah and its alliance with one of the main Christian parties: the Free Patriotic Movement, and the fading international support given to the Cedar Revolution, which began to decrease as soon as President George W. Bush’s term in office ended.

During the period extending from 2005 to February 2014, the political faction that arose from the March 14, 2005, demonstration saw nothing but setbacks; the harshest among them was the overthrow of its leader Saad Hariri’s government and the latter’s banishment from Lebanon in 2011.

The faction was thus forced to form a national unity government with Hezbollah and its allies, and was compelled to accept the imposition of the constitutionally invalid concept of a veto power inside the cabinet. This allowed Hezbollah to enforce an internal formula by which it could obstruct the proper functioning of the system of governance. The primary contentious issue that prevailed in political discussions, exacerbated the divisions among the factions and compromised the country’s social contract, as well as paralyzed public institutions, was confined to the matter of Hezbollah’s military force that stood in parallel with that of the state’s and the pro-Iranian policies adopted by the party, particularly its closeness to Iran’s Revolutionary Guard.

The March 14 coalition was thus unable to counterbalance its political, heavily armed and Iranian-backed foe, despite its victory in the 2005 and 2009 parliamentary elections. And no one can forget how a number of the March 14 coalition’s leadership was systematically assassinated; the latest victim being former Finance Minister Mohammed Chatah, known for his moderation, who was killed by a car bomb in downtown Beirut on Dec. 27, 2013. Furthermore, the March 14 group committed many grave errors, most important among them being its failure to bring independent Shiite figures to power during the period of its reign. This failure consecrated the parliament speaker Nabih Berri and Hezbollah duo’s exclusive representation of the Shiite community, both of whom are known for their close ties with the Syrian-Iranian axis.

The March 14 movement also lost a great deal of its mobilization power when its leader, Saad Hariri, left the country to remain in exile, and as a result, became a traditional grouping of parties that lost their “revolutionary luster” among masses yearning for change and modernity. Furthermore, the absence of independent figures who once formed part of its backbone, such as Samir Frangieh and Nassib Lahoud, as well as the absence of civil forces from its electoral lists and cabinet formations, was a clear indication that March 14 had reverted to a traditional political mode of action.

Yet, the greatest error, so to speak, came when Saad Hariri agreed to a compromise with the Syrian-Iranian camp, through the so-called S-S (Syrian-Saudi) initiatives with Qatari backing, which soon turned against him, leading to his ouster from power and the country. That compromise was and still is a sore issue for March 14 supporters, particularly when it became clear that logic was of no use when dealing with the other camp. Through that compromise, Hariri relinquished or turned a blind eye to the need to confine the possession of armaments to the Lebanese state, and to limit decisions dealing with peace and war to the latter’s legitimate institutions.

Today, Saad Hariri returns to power, even while he remains outside the country. The compromise, or mini-compromise, that allowed the formation of a cabinet a few weeks ago, has yet to be completed to allow his return home. In other words, the last of his political and security guarantees have yet to fully mature. No doubt, the formation of the cabinet came as a result of efforts by Lebanon’s friendly and supportive nations, led by France and the United States, following the latter’s rapprochement with Iran, and after Saudi approval. The goal of these efforts is to shield Lebanon from the repercussions of the ongoing Syrian conflict, and prevent a constitutional vacuum from ensuing if a new president is not elected within the constitutionally prescribed time frame ending in May.

It is true that the spread of the Syrian war into Lebanon, more precisely into the Shiite community — the heart of Hezbollah’s popular base — under the guise of Islamist jihad, was a main contributor to Hezbollah’s acceptance of the compromise. It is also true that Hariri’s return will be somewhat of a victory or the restoration of lost status. Everyone knows, including March 14’s foes, that Sunni moderation is the safety valve that protects this small country, as it does the larger Middle East region. Everyone knows that the compromise was not well-received by supporters of both factions. Part of Hezbollah’s base felt cheated, even defeated by the ascent of March 14 hawks to power, while March 14 supporters stood afraid of another S-S-like deal, the cost of which they would have to pay sooner or later. This is a fear that perhaps drove the March 14 coalition’s strongest Christian party, the Lebanese Forces, to reject the compromise and not participate in the cabinet formation.

A ministerial statement has yet to be announced, the text of which, relating to the issue of Hezbollah’s weapons or the “resistance,” would indicate the scope and boundaries of this compromise. The statement would also determine the profile of the “chosen” or consensual president, that is, assuming elections will be held on time.

In any case, internal factions play a limited role in the making of this compromise, and their capacity to reject or change it is also as limited. Such is the truth before a generation that initiated, on March 14, 2005, the most stunning of revolutions in Lebanon’s history; a model for an Arab Spring that was betrayed, just as ours was by the game of nations.