Since the beginning of the Syrian civil war, there has been a resurgence in Saudi Arabian influence in Lebanon, as the desert kingdom attempts to fill the vacuum left by Syria, Nasser Chararah writes. 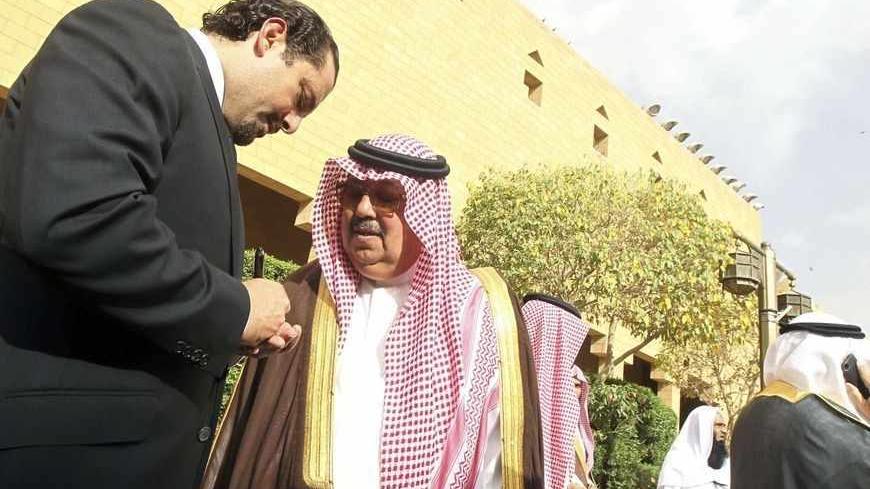 Saudi Arabia is seeking to inherit Syria’s role in Lebanon, which began in the 1970s and lasted until Syrian troops withdrew from the country following accusations that Syria was behind Prime Minister Rafik Hariri’s assassination in 2005.

Saudi Arabia’s relationship with Lebanon has undergone many phases. During the rise of Nasserism, Riyadh espoused in Lebanon a policy of opposition to the Egyptian leader. After Gamal Abdel Nasser’s death in 1970 and the beginning of the Lebanese civil war and the growth of Syrian interference there, Riyadh vacillated between having an adversarial, peaceful or even harmonious relationship with Damascus in relation to Lebanon.

During the last 10 years, Lebanon has become akin to a mirror of the sometimes intimate, and other times strained, relationship between Riyadh on one end and the Damascus-Tehran alliance on the other. The last harmonious period Syria and Saudi Arabia had in Lebanon occurred following King Abdullah’s initiative aimed at reconciling with Syrian President Bashar al-Assad at the 2008 Arab Economic Summit in Kuwait. This led to the Lebanese adopting the term “seen-seen” (Arabic for S-S) to describe the Syrian-Saudi Arabian accord relating to the management of the Lebanese crisis. This accord, in turn, led to Lebanon enjoying a period of political calm and the formation of a national unity government headed by Riyadh’s most prominent ally, former Lebanese Prime Minister Saad Hariri, which included members of Hezbollah and representatives of all the components of Lebanon’s incongruous political factions.

But, the S-S understanding soon collapsed, with Hezbollah turning against Hariri’s cabinet. The reason was that Damascus, under Iranian pressure, had forsaken another of its agreements, namely to work together toward guaranteeing that Ayad Allawi, and not Nouri al-Maliki, became prime minister of Iraq.

Throughout the period that followed January 2011 (when Hezbollah and its allies orchestrated a political coup d’état against Saad Hariri, leading to his ouster from the national unity government, and the formation of a cabinet internationally classified as being Hezbollah’s government, headed by the centrist Najib Mikati), Saudi Arabia shied away from playing any political role in Lebanon. This was in keeping with its established tendency of turning its back on whatever political arena that turned against it.

Once the Syrian crisis erupted, Riyadh’s announced priority was to back the Syrian opposition’s efforts to change the Assad regime. Since then, Saudi Arabia’s ally in Lebanon, Saad Hariri, has remained outside the country, bound by a Saudi decision to do so and by Riyadh’s desire to make it known that it was choosing to “disengage” itself from the Lebanese scene. At the same time, Riyadh abstained from officially hosting Mikati, except when his term was at an end, which was unprecedented in Riyadh’s relationship with the (Sunni-controlled) Lebanese premiership.

Recent weeks, however, have seen a radical change in the Saudi policy of turning its back on Lebanon, with events pointing to a Saudi Arabian decision to return in force and re-establish its influence on the country’s political scene. Its most important step in this regard was to take the lead in managing the Lebanese crisis brought about by internal disagreements relating to the electoral law and the naming of a successor to Mikati.

What led Saudi Arabia to change its stance and re-immerse itself in Lebanon’s quicksand? Several sources point to a Saudi re-evaluation of the policy adopted toward Syria. This does not equate to a change in position regarding the necessity of toppling the Syrian regime, for that remains a constant in its Syria policy.

This re-evaluation occurred as result of Saudi Arabia espousing a different view than Qatar and Turkey concerning the political alternative that would inherit Syria’s regime, if it were to fall. While Doha and Ankara favor the ascension of the Muslim Brotherhood to power, Saudi Arabia strongly opposes that eventuality. In fact, it will expend great diplomatic effort to prevent the establishment of yet another Brotherhood regime in an Arab country.

According to experts in Saudi affairs, Riyadh is of the view that Muslim Brotherhood rule in Syria would lead to the Brotherhood eventually coming into power in Jordan, thereby threatening to turn the attention of Arab revolutions from military presidential totalitarian regimes to regimes ruled by royal families.

Riyadh is also wary that the fall of Jordan into the hands of the Brotherhood would leave Saudi Arabia half-surrounded by Brotherhood regimes, and threaten to spread Brotherhood control over Syria and some other Gulf monarchies.

According to these sources, Riyadh started a concerted move on three different axes. The first aimed to thwart a Brotherhood takeover of Syria. The second proposed an alternative to the Syrian regime composed of Salafists and some elements who defected from the Syrian army. There is some diplomatic information pointing to the fact that US Secretary of State John Kerry was informed by his Saudi interlocutors, during his visit to Riyadh, that the Brotherhood experiment, as seen in Egypt, has proved to be a failure and that Riyadh strongly objected to the establishment of Brotherhood rule in Syria.

The third axis revolves around Saudi Arabia’s return to the Lebanese scene, which emanates from a Saudi belief that it needs both a Levantine card and Syrian opposition bargaining chips to bolster its position and influence when negotiating for the establishment of an alternative to the Syrian regime.

These goals, in turn, justify Riyadh’s wish to inherit Syria’s role in Lebanon, in light of the strong link between events there and the situation in Syria, as well as its desire to garner influence among Syrian opposition factions not affiliated with the Muslim Brotherhood. This is especially relevant, considering that information indicates that Paris and Doha are training around 2,000 Brotherhood militants in Jordan, while Turkey sponsors Brotherhood shields in Northern Syria. (“Shield” here is a term used by the Muslim Brotherhood to describe its fighting forces, such as the Idlib Shield, which contains around 2,000 fighters, and the Aleppo Shield. The Salafists use the name “brigade,” such as the Free Syrians Brigade, the Islam Brigade, or the Zou Nourein [Two Lights] Brigade led by Sheikh Adnan al-Arar.)

The Lebanese prime minister-designate, whom Saudi Arabia succeeded in convincing all Lebanese factions to name, is the son of an old and well-established political family that always supported Saudi Arabia. His father, the renowned Sunni leader Saeb Salam, who served as prime minister several times during the First Lebanese Republic (which extended from independence in 1943 until 1989, when Lebanon adopted the conciliatory Taif constitution), is considered to have been a great Lebanese ally to the Saudis. He left Lebanon during Syria’s occupation of the country. This was indicative of Saudi Arabia’s waning influence, and the rise of Syrian influence there.

Conversely, tasking Tammam Salam with the formation of a new government reflects the resurgence of Saudi influence in Lebanon, with the Saudis inheriting the role that Syria played in managing the country’s political crises prior to the Syrian revolution. Riyadh is currently painting itself as arbiter between Lebanon’s political and religious factions, and not as a party to any of the country’s disputes. It is proposing moderate and uncontroversial solutions while trying to build up trust with yesterday’s foes, which include Hezbollah. It is establishing, through parliament Speaker Nabih Berri (who is also the head of the second-most-influential Shiite party after Hezbollah), channels of communications with Lebanon’s Shiite community aimed at finding formulae that would lead to political reconciliation between Shiite and Sunni political parties, particularly the Future Movement led by Riyadh’s strongest ally in Lebanon, Saad Hariri.

Despite being in its early stages, the resurgence of Saudi influence in Lebanon has succeeded so far in alleviating the Lebanese crisis, which has lingered on for months without a solution in sight. This has given rise to the impression that chaos is the only alternative to Syria’s absent tutelage over Lebanese affairs. But Saudi Arabia, as a result of its latest political initiative, has succeeded in guaranteeing Lebanese consensus on the name of a centrist prime minister who is, in effect, close to it. It thus demonstrated that it was capable of containing the Lebanese situation and contributing to the country’s stability in Syria’s stead.

In the past, Riyadh’s Lebanese allies used to say that, strategically, Lebanon has two political neighbors: A close one in the form of Syria, and a distant one in the form of Saudi Arabia. The practical implementation of this concept is center stage again today: When the regional influence of the close neighbor dwindled in Lebanon, the distant one stepped in to fill the ensuing void.