Hamas’ stance on the war in Yemen may redraw the map of its political alliances in the region, repositioning itself toward the so-called Sunni axis. 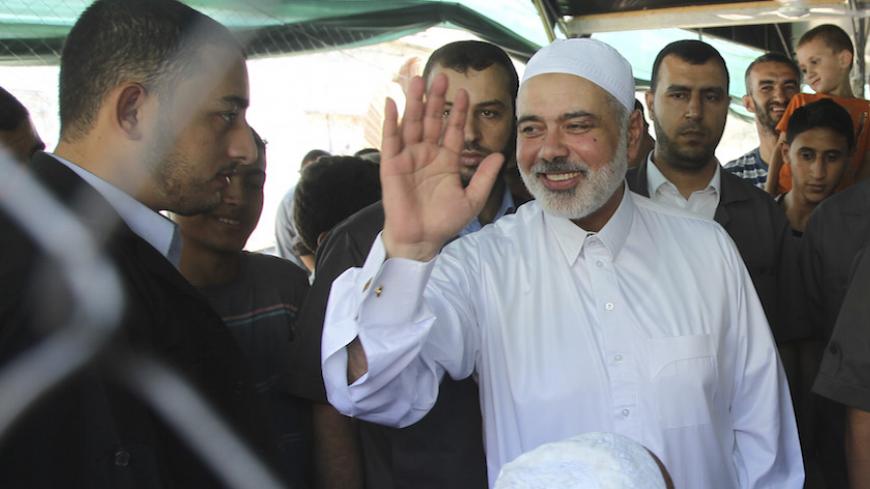 Senior Hamas leader Ismail Haniyeh waves after performing Friday prayers at a makeshift tent erected near the remains of a mosque, which witnesses said was hit by an Israeli airstrike during a seven-week Israeli offensive, in Gaza City, Sept. 5, 2014. - REUTERS/Ahmed Zakot

With the continuation of Operation Decisive Storm, which the Saudi-led coalition has been carrying out against the Houthis in Yemen since March 26, more positions continue to emerge on the operation — some in support and some opposed — thus redrawing the map of alliances in the region.

Hamas announced its position on the war March 30, in a brief statement noting its support of political legitimacy in Yemen, and the option that the Yemeni people get who they democratically agree upon. The statement stressed that Hamas stands with Yemen’s unity and security and wants dialogue and consensus among its residents, and added that the movement supports the security and stability of the Arab region and rejects anything that harms its security and stability.

It seems that the only statement issued by Hamas on Yemen was drafted in a cautious and delicate manner, in which it does not adopt a specific position for or against the war on the Houthis, for fear of paying high political costs — either from Saudi Arabia, which is leading the coalition, or Iran, which stands with the Houthis.

Hamas believes that the sensitivity that accompanied the issuance of its position on Yemen was similar to what it announced after the outbreak of the Syrian revolution, via an official statement issued on April 2, 2011.

At the time, Syria and Iran considered that Hamas’ statement supported the rebels against the regime. This led to a historic rift in the relationship between Hamas and what was then called “the axis of resistance and opposition,” and that rift has remained to this day. Thus, Hamas held internal consultations for several days before emerging with its position on the war in Yemen, using expressions that are open to interpretation according to potential changes and that satisfy most of the parties in the Yemeni crisis.

What is strange is that Hamas and Fatah agreed on the war in Yemen. Fatah President Mahmoud Abbas said April 5 that the war enjoyed an Arab consensus, and that the Palestinians were part of that consensus.

Meanwhile, Hamas disagreed with its allies concerning the war in Yemen. Islamic Jihad announced March 29 that the Yemen war did not serve the Palestinian cause, and that its biggest beneficiaries were Israel and the United States.

On the same day, the Popular Front for the Liberation of Palestine condemned what it considered a US-backed aggression on Yemen, and rejected intervention in the country’s foreign affairs.

Hamas’ official statement on Yemen did not take a clear position on the two sides of the conflict, yet when reading between the lines one can sense that Hamas maintains tacit support for the democratically elected president, Abed Rabbo Mansour Hadi, who is acknowledged globally and regionally.

Speaking on March 30 during a political conference in the Gaza Strip that was attended by Al-Monitor, the deputy head of Hamas’ political bureau, Ismail Haniyeh, said, “Arabs today are living in a sensitive stage in the history of the region. There are threats, conflicts and polarizations; and they have the right to secure their countries.”

Haniyeh's statement indicates tacit approval of the ongoing military operation against the Houthis in Yemen, since he agrees with the right of Arab states to secure their own countries. This is in line with Riyadh’s accusations that the Houthis are messing with Yemeni’s security and threatening the borders of neighboring Gulf countries.

This position was clarified by Ahmed Youssef, a former adviser to Haniyeh, who told Al-Monitor, “Saudi Arabia is working to accommodate Hamas. The Gulf region is trembling from the Shiite spread in the Arab region, promoting King Salman [bin Abdul-Aziz Al Saud] to [try] to unify Sunnis against Shiites. The Gulf states have the right to defend their interests in Bab al-Mandab and the Red Sea.”

But Mahmoud al-Zahar, a member of Hamas’ political bureau who leads a major current in Hamas supporting rapprochement with Iran, was more clear in his announcement March 29 that Hamas neither supported nor opposed Operation Decisive Storm, rather saying it calls for the unity of Yemen in the framework of legitimacy.

Although Iran has remained silent about Hamas’ position on the war in Yemen, media sources close to Hezbollah criticized Hamas’ statement. Al-Akhbar claimed March 30 that the implicit support Hamas showed toward Saudi Arabia reveals a split between the movement’s political and military wings toward the operation, yet offered no proof for this assertion.

Yet, a former member of the Iranian Shura Council who spoke on condition of anonymity told Al-Monitor, “Hamas did not learn its lesson from its previous position on Syria. Although its statement on Yemen was not an attempt to anger Iran, it is clear that the statement includes an inclination toward Saudi Arabia, meaning that Hamas is — for a second time — turning its back on the one that supported it with money and weapons.”

On March 30, Hamas’ official website published an analysis of the movement’s statement, claiming that its position was balanced, and adopted the logic of Saudi Arabia by supporting the legitimacy of the Yemeni president. It seems, according to the analysis, that Hamas seeks to enter the official Arab system, and accepts the leadership of Salman at this difficult stage, preferring it to any other alliances. At the time, however, the analysis noted that Hamas does not want to antagonize parties to the conflict, since it has overlapping relationships with international and regional powers such as Russia and Iran.

In recent days, the Palestinian arena has witnessed sharp political debates on social networking sites about Hamas’ position on the Yemeni crisis. Some called for the movement to maintain its silence and not to comment on the ongoing war, to prevent a repeat of the crisis with Syria and Iran. Others, meanwhile, believed it was necessary for Hamas to announce its position in light of the sectarian polarization in the region, so as not to remain a bystander to the regional expansion of Iran at the expense of the Arab countries.

Mohammed Nazzal, a member of Hamas’ political bureau, told Al-Monitor, “Hamas is committed to a policy of noninterference in the internal affairs of other states, but there are huge events that impose themselves on the political scene in the region and have a significant impact on the Palestinian cause. So it was necessary to clarify our position, to prevent any confusion or misunderstanding.”

Finally, Hamas’ stance on the war in Yemen redraws the map of its political alliances in the region, repositioning itself toward the so-called Sunni axis that is headed by Saudi Arabia and includes most of the Gulf states, Egypt and Turkey. Yet, Hamas’ statement left the door open to a rapprochement with Iran, and did not cut ties with it, as Hamas did not mention Operation Decisive Storm by name in its statement.

The reason for Hamas’ new alignment beside Saudi Arabia could be that the positive steps the movement has made toward Iran in recent months were not translated into a full normalization of relations between the two, ensuring the return of financial and military support to the movement. Iran continues to place impossible conditions on Hamas and its messages of “flirtation” did not succeed, as indicated by an Al-Monitor article on the topic.