In light of its worsening financial crisis and need for military support, Hamas has resumed relations with Tehran, which have been strained since the start of the Syrian revolution. 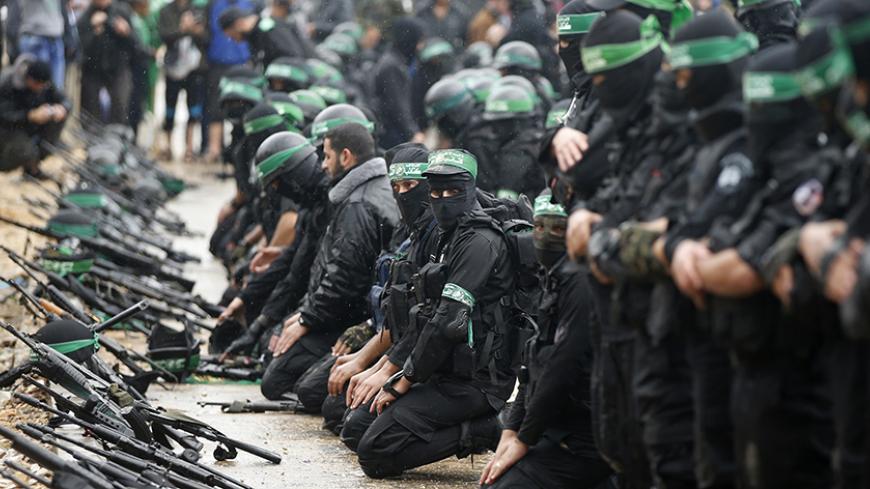 GAZA CITY, Gaza Strip — Hamas has decided to resume public relations with the Islamic Republic of Iran after years of apathy between them as a result of the Syrian crisis. Signs confirming the rapprochement came from the deputy chairmen of Hamas’ political bureau, Mousa Abu Marzouk and Ismail Haniyeh.

In a June 15 interview with Hamas-affiliated Al-Aqsa TV, Abu Marzouk praised Iran for the first time since Hamas left the Syrian capital of Damascus. He said, “The support offered by Iran to the Palestinian resistance — be it in logistics, training or funds — is unmatched and beyond the capabilities of other countries. Iran’s support and backing to the resistance and the Palestinian cause is clear, explicit and equal to the stance of Arab, Muslim and free peoples of the world who back and support the resistance.”

Relations between Hamas and Tehran began to deteriorate in 2012, after the wave of Arab Spring revolutions reached Syria, which is the main ally of Iran in the Middle East. A public row emerged when the head of Hamas’ political bureau, Khaled Meshaal, left Damascus, where he had been residing for years, after he refused to support the Syrian regime’s and Iran's position toward the Syrian revolution.

Haniyeh — Hamas' leader in Gaza — placed a phone call to the speaker of Iran's Shura Council, Ali Larijani, to congratulate him on winning the post. A June 3 communique issued by Haniyeh’s office confirmed “our intent not to deviate from our beliefs and the path of resistance, and our commitment to stay true to the course, resist in Palestine, and call on the [Arab and Muslim] nation to unite and forsake discord for the sake of Jerusalem and Palestine.”

Abu Marzouk’s statements and Haniyeh’s telephone call came to confirm the change occurring in the Islamic movement’s relationship with Tehran and endorsed the fact that relations between them had been restored with a resumption of Iranian funding.

In audio clips leaked Jan. 30 on YouTube, Abu Marzouk could be heard harshly attacking Iran and denying the latter’s contention that it was providing support to the Palestinian resistance. In those extracts, he talked about what he described as Iranian lies, saying, “Since 2011, every ship they lost they claimed was destined to our shores. A ship carrying weapons and lost in Nigeria was said to be on its way here. I told them that not one ship arrived, for all the ships that were uncovered seem to have been destined for us.”

A senior Hamas leader in Gaza told Al-Monitor in that regard, “Hamas’ political bureau settled the internal political debate by voting in favor of resuming relations with Iran, particularly after expectations waned concerning the relationship with Saudi Arabia.”

The source, who requested anonymity, added, “Hamas’ military wing strongly endorsed the resumption of said relations, especially in light of the urgent need for funds and military support that only Iran can provide.”

In an interview with Al-Monitor, political columnist in the Hamas-affiliated Al-Risalah daily Ibrahim al-Madhoun said, “Hamas hoped to build strong relations with Saudi Arabia, particularly after King Salman ascended to power there. But that plan seems to have been thwarted by political complications from inside the kingdom.”

Madhoun added, “Hamas and its military wing’s need to confront the Zionist enemy, and Iran’s unparalleled ability to back the movement financially — militarily and politically in any potential confrontation — led to greater openness toward Tehran at a time when the Arab axis failed to offer enough to attract Hamas to its camp.”

Another Hamas leader requesting anonymity said, “Relations between Hamas and Iran never ended and were not affected during recent years. They diminished on some levels at certain times, but the relationship remained ongoing, at least on the military level.”

He added, “The difference today is that Hamas and Iran decided to make this relationship public and saw no need for it to remain clandestine. Public rhetoric about the resumption of relations is now clear and explicit."

After right-wing hawk Avigdor Liberman’s appointment to the head of Israel’s Ministry of Defense and the rise of rhetoric about the possibility of waging a new war against Gaza, Hamas’ military wing, Izz ad-Din al-Qassam Brigades, found itself in desperate need for financial and military support, while its political wing sought public and explicit political backing.

The senior Hamas leader explained, “The Arab world is undergoing a redrawing of its political map. The Syrian regime is achieving success on the ground against its opponents, Saudi Arabia is preoccupied with its war in Yemen and Turkey is restoring relations with Israel. As a result, Hamas fears a continuation of its isolation due to regional developments. It is thus consciously resuming its rapprochement with Iran out of its leadership’s full conviction that doing so was the best option to safeguard its strength militarily and politically.”

Hamas' decision to return to the bosom of Iran may be its only option at this time in light of its worsening financial crisis and need for military support. Through this support, Hamas aims to counter Israel’s persistent search for tunnels along the Gaza border, aimed at deteriorating this specific strategic military capability that Hamas has grown to rely on in confronting Israeli forces.