How to read Hamas’ visit to Iran

Hamas leaders seem pleased with the outcomes of a senior delegation's historic visit to Iran, though details are still scanty. 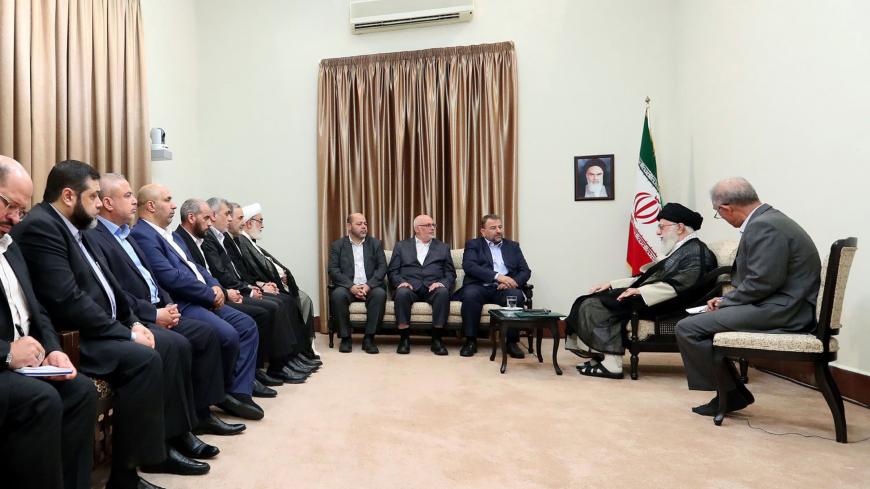 During a press conference in Gaza July 20, head of Hamas’ political bureau Ismail Haniyeh expressed hope the visit would produce significant outcomes, though he did not clarify its goals.

The schedule of the visit, which lasted July 21-25, was packed with meetings and one of the most significant in years.

The meetings addressed Iran’s continuing financial and military support for Hamas, which is suffering from a financial crisis, while Iran faces US and Israeli threats. Iran and Hamas likely discussed strengthening their alliance and ensuring that their coordination bore results both political and militarily.

In a July 25 interview with the Hamas-affiliated Al-Aqsa news network, Arouri described Iran’s visit as “strategic and monumental, given its timing and the current circumstances.” He added, “Our relationship with Hamas is part of our alliance with the opponents of the Zionist project and is not directed against any Arab. This relationship aims at uniting efforts to face Israel, because Iran is in fact ready to support the resistance, and it did not ask us to use our relations with it to harm any Arab party.”

Mahmoud Mardawi, a member of Hamas' National Relations Office, told Al-Monitor, “The visit succeeded in achieving most of Hamas’ expectations from Iran, after their relations had recently dwindled without reaching a complete break. The visit also mended and deepened their ties and established their agreement on the Palestinian cause, regardless of regional issues they disagree on. Iran is backing Hamas, but it is not seeking help from the movement in its conflict with the US, despite Hamas’ supportive stance.”

The Syrian revolution that began in March 2011 sparked the main dispute between Hamas and Iran. Hamas saw the revolution as a wave of public protests against the poor living conditions in Syria and believed the Syrian government should cooperate rather than respond with an iron fist. Iran saw the revolution as a US-Israeli conspiracy to topple the Syrian government and supported the latter. This difference chilled Hamas-Iran relations, especially after Hamas left Syria at the end of 2012. In May 2017, following the election of the current Hamas leadership, relations picked up again.

Hamas sources told Al-Monitor that the visit had been scheduled three months earlier, but they were waiting for Haniyeh to lead the delegation. Amid Egypt’s rejection of Haniyeh’s travel request, Iran and Hamas decided to expedite the visit, involved high-level officials, with Hamas hoping to receive Iranian promises to beef up financial and military support.

Egypt did not officially forbid Haniyeh from going on his foreign tour. Al-Monitor found out from Hamas sources who spoke on condition of anonymity that since early 2019, Hamas has been asking Egypt to let Haniyeh do it, but Egypt kept stalling and asking the movement to be patient. The repeated delays stem from Egypt’s reluctance to give Hamas a political platform in the region to communicate with Egypt’s enemies like Qatar, Turkey and Iran.

On July 21, the Hamas delegation began its visit by meeting Kamal Kharazi, head of Iran’s Strategic Council for Foreign Affairs, to talk about the regional and international situation and the dangerous US behavior including sanctions on Iran.

On July 22, the Hamas delegation held its first meeting since 2012 with Iranian Supreme Leader Ayatollah Ali Khamenei and communicated a message from Haniyeh in which he condemned the US attacks on Iran by besieging it and provoking it militarily, and expressed solidarity with Iran. Khamenei highlighted how proud he was of Hamas’ “jihad” and stated his appreciation of Haniyeh’s message and Iran’s ongoing support for the Palestinian cause.

On July 23, Hamas met with Ali Akbar Velayati, former minister of foreign affairs and senior adviser to the supreme leader in international affairs, and they discussed US plans to rearrange the region according to its interests.

On July 24, the Hamas delegation met with Iranian Secretary of the Supreme National Security Council Ali Shamkhani, and they discussed the US peace plan, the Gaza siege and Hamas’ readiness to respond to Israeli attacks.

Hussein Royoran, professor of political science at the University of Tehran, told Al-Monitor, “A visit by such high-level leadership has not been seen in years and it reflects solidarity between the resistance axis parties. Iran will not allow targeting Gaza, Hamas will not stand idle if Iran is attacked and Iran will keep supporting Gaza despite the tough blockade. During the visit, there was talk about turning the page on the dispute between Hamas and the Syrian [regime], as Iran is interested in the alignment of the axis of resistance.”

On July 18, a Hamas delegation led by its foreign relations deputy chief Osama Hamdan met with the assistant to the speaker of Iran’s Shura Council, Hussein Amir Abdul Lahyan, in Beirut to discuss common issues and put the final touches on arrangements for the visit.

Abdullah Abdullah, head of the political committee at the Palestinian Legislative Council and a member of Fatah’s Revolutionary Council, told Al-Monitor, “The visit reflects Hamas’ quandary and its desire to break free. But the politics of regional axes harms Palestinians, and Hamas should not take part."

Hussam al-Dajani, professor of political science at Al-Ummah University in Gaza, told Al-Monitor, “The visit happened at a time when Hamas and Iranian conditions were similar, due to the financial and political blockades and common challenges like the [US peace] deal. Hamas’ visit is part of its quest to obtain financial and military resources due to its financial crisis, without shutting the door on relations with Saudi Arabia.”

Hamas’ visit to Iran comes at a time of tension with the Saudis, the most recent chapter of which consisted of the Saudi authorities’ campaign against Hamas in April that involved deporting and arresting 60 pro-Hamas Palestinians and Saudis residing in the kingdom and freezing their assets.

Abu Marzouk stated July 24 that Iran is among the few countries that have kept supporting the resistance. Arouri said July 22 that Hamas is defending Iran, and Khamenei noted that Hamas is at the core of Palestinian national efforts. These statements might fuel Arab countries’ fears regarding Hamas’ inclination to the Iranian axis.

Iranian political analyst at the London-based Arabi 21 website Saber Kol Anbari told Al-Monitor, “The timing of Hamas’ visit to Iran is key due to the regional developments that pushed both sides to restore ties and cement their common interests. Hamas and Iran are up against enmity from Israel, the US, Saudi Arabia and the UAE, which creates a huge space for joint work. The US sanctions on Iran might lead to a drop in financial support for Hamas, but support on other levels, like the military one, which is more important, will increase.”