In eye of regional storm, Hamas pushed closer to Tehran

Iran has recently welcomed the election of Hamas’ new leadership, which raises questions about Hamas’ next step in forming and mending its regional relations. 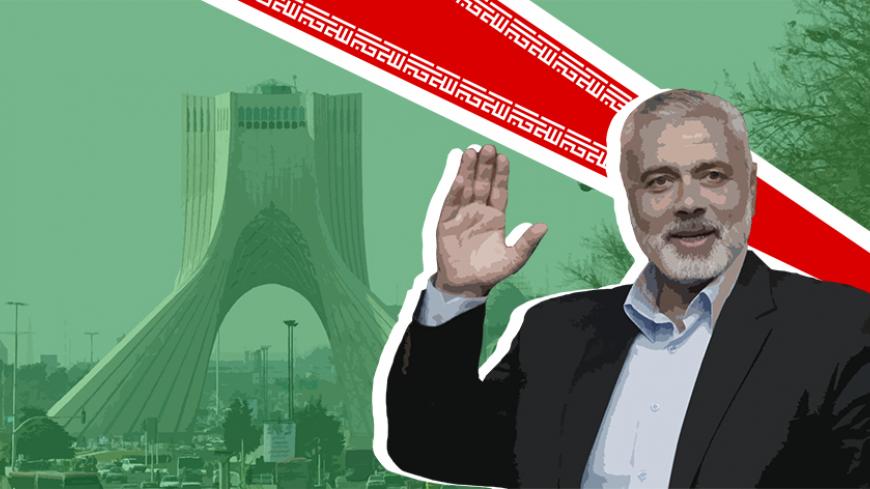 Iran congratulated Hamas despite the lukewarm relationship following tension over diverging views on the Syrian revolution since 2012. It seems Iran is upbeat about the ability of Hamas’ new leadership to restore the once-strong relationship between the two parties.

Several Iranian officials reached out to Hamas following the election of its new leadership, most recently on May 29 when Ali Larijani, head of the Iranian Islamic Consultative Assembly, congratulated Haniyeh for his election as head of the movement. He stressed that Iran considers supporting the struggle of the Palestinian people a top priority, praising Hamas and Gaza’s steadfastness.

On May 10, Iranian Foreign Minister Mohammad Javad Zarif sent a congratulatory telegram to Haniyeh, stressing Iran’s continued support for the Palestinian resistance. For his part, the deputy head of the Islamic Consultative Assembly, Hossein Amir-Abdollahian, sent a similar telegram to Haniyeh on the same day.

Gen. Qasem Soleimani, commander of the Quds Force of the Islamic Revolutionary Guard Corps, sent a congratulatory message to Haniyeh on May 8, saying he was looking forward to what he described as a wise administration from the new Hamas leadership to promote integration with what he described as their fellow allies in the resistance axis led by Iran.

Khaled Kaddoumi, Hamas’ representative in Iran, told Al-Monitor, “With the beginning of 2017, the Hamas-Iran relationship plunged into a new positive phase, leaving behind past complications. Today, Hamas opens a new page with Iran. Both sides are well aware that the upcoming phase is serious and should be handled differently. Regardless of its size, the political, financial and military support provided by Iran to Hamas never stopped — and although this relationship does not depend on the change in Hamas’ leadership, the recent internal elections will most definitely help the movement renew relationships with the Arab and Islamic parties.”

Talk about the gradual return of Hamas' relationship with Iran coincided with statements by Sheikh Hussein al-Islam, assistant Iranian foreign minister, on April 30, describing the Palestinian Authority's (PA) actions against Gaza as a crime committed under orders from the United States and Israel. Meanwhile, Nabil Abu Rudeina, the spokesman for the Palestinian president, condemned on the same day the Iranian hostility against President Mahmoud Abbas, accusing Iran of creating the Palestinian division.

Walid al-Moudallal, political science professor at the Islamic University of Gaza and the head of the Center for Political and Development Studies, told Al-Monitor, “With the recent Hamas election, those calling for rapprochement with Iran from within the movement were given a new hope. The road is now paved for a full resumption of relations, with all the financial and military support they bring. However, the Saudi summit attended by US President Donald Trump on May 21, during which he classified Hamas as a terrorist group, might prompt those who still had doubts to finally push for rapprochement with Iran.”

He added, “The region has been divided into two camps. The first includes the Gulf countries, Egypt, Jordan and the PA, while the second includes Iran, Hezbollah and Hamas. Meanwhile, the Hamas leadership residing in Qatar might have to relocate to Tehran amid increasing pressure on Doha, which is being accused by some neighboring countries, such as Saudi Arabia, the UAE and Egypt, of supporting terrorism and harboring the leaders of Hamas.”

Abdullatif al-Kanou, Hamas spokesman in Gaza, told Al-Monitor, “Hamas-Iran relations have improved recently. The movement is keen on developing the relationship to best serve the Palestinian cause. If the Hamas leadership were to go on a foreign tour sometime soon, it might visit Tehran, especially since Hamas hopes Iran’s financial and military support to the movement would increase, in the interest of the Palestinian resistance.”

Over the past few years, Hamas may have been wary of its regional relations. It has not been entirely close to Iran, so as not to upset Saudi Arabia and the Sunni states, nor has it cut off all ties with Tehran for fear of the total loss of its financial and military support, which may have decreased but never stopped, although there are no accurate figures.

Mukhaimer Abu Saada, political science professor at al-Azhar University in Gaza, told Al-Monitor, “The situation in which Hamas has found itself in recent weeks — following the PA's sanctions and increasing pressure against Gaza, as well as the improving Arab-American relations and their negative impact on Hamas and Iran — will push both the movement and Tehran into mending fences.”

A former member of the Islamic Consultative Assembly told Al-Monitor on condition of anonymity, “The fact that Iran has welcomed the recent Hamas elections means it has finally started to see that the Hamas leadership has agreed to turn toward Tehran after letting go of everything that has impeded the movement from joining the resistance axis in the past. Tehran believes that Haniyeh and Sinwar will help the movement overcome all obstacles that have kept Hamas away from Iran.”

The successive events in the region may have a negative effect on Hamas, as it may see itself in the eye of the regional storm, after the United States placed it in the same category as Iran, Hezbollah and the Islamic State. This might make it prone to new blockade policies, which might push it over the edge into fully restoring its relationship with Iran. Hamas might as well be jumping into a time machine that will take it back to before the estrangement with Tehran in 2012, adopting political positions that will require a new classification of political axis, without any hesitation on Hamas’ part in terms of normalization with Tehran.