What Russia has to gain from relations with Hamas

Russia's recent steps to further its rapprochement with Hamas are connected to its existing alliance with Iran and the overall situation in the region. 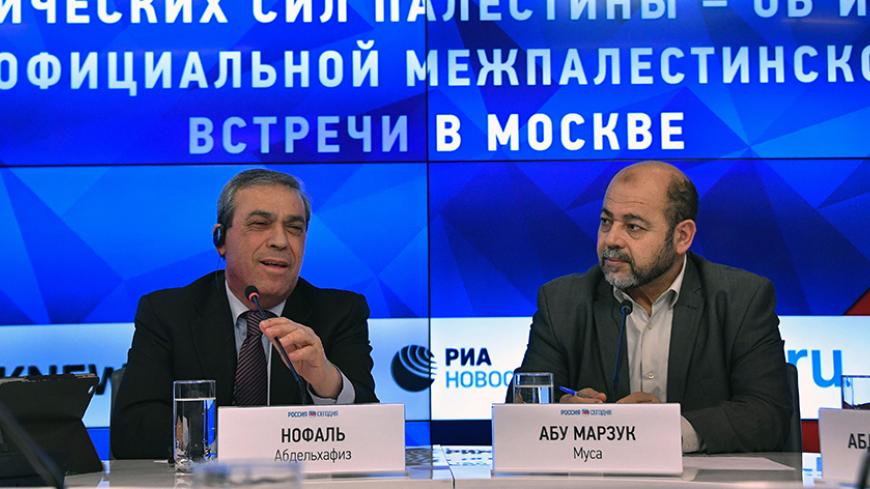 Russian Ambassador to Iran Luan Jagaryan said Aug. 1 that Hamas is a national movement and one of the main representatives of the Palestinian people, and that Moscow does not consider it a terrorist organization.

Jagaryan made this statement during a meeting with Khaled Kaddoumi, the Hamas representative in Iran, who stressed Russia's pivotal role in supporting the Palestinian people.

Kaddoumi told Al-Monitor, “International relations are a buildup process. Hamas’ relationship with Russia is greater than statements made here and there. Their political relationship was officially launched in March 2006 when the Hamas leadership visited Moscow after winning the Palestinian legislative elections in January of the same year. The visit constituted a political breakthrough in the movement’s international relations since Russia is a member of the Quartet on the Middle East.”

He added, “In May 2010, a historic meeting was held between Hamas leader Khaled Meshaal and Russian Prime Minister Dmitry Medvedev in Damascus. The Russian presidential and governmental representatives as well as officials from the Russian Foreign Ministry in charge of Middle East and North African affairs held several meetings with the Hamas political leadership in a number of Arab capitals.”

In August 2015, Meshaal met with Russian Foreign Minister Sergey Lavrov in Qatar. In August 2016, he met with Mikhail Bogdanov, Russia's deputy foreign minister and special presidential representative for the Middle East, in Doha, and a delegation from Hamas arrived in Moscow in January to meet with Lavrov.

Tayseer Moheisen, a diplomatic adviser to the Palestinian Foreign Ministry in the Gaza Strip, told Al-Monitor, “Russia's rapprochement with Hamas shows the latter's need for Moscow, as one of the world's greatest capitals, to deter the ferocious United States and Israeli attacks. Meanwhile, Russia sees in Hamas an influential party when it comes to the Palestinian cause. In addition, it seems that President Vladimir Putin wants to restore the Soviet empire and believes that the Palestinian cause and Hamas are one of the gates to the Middle East. This is why Russia did not agree to classify Hamas as a terrorist organization, as Washington and the European Union (EU) have done. This would help forge a balanced international position toward Hamas, which would prevent the movement from being singled out by regional and international powers.”

Jagaryan’s statements were not the first sign of this gradual rapprochement between Hamas and Moscow. On May 18, the Russian Foreign Ministry welcomed Hamas' new policy document and congratulated Ismail Haniyeh for his election as head of Hamas’ political bureau on May 6. On May 19, Haniyeh phoned Bogdanov and discussed bilateral relations, the Russian role in achieving national reconciliation between Fatah and Hamas, and Hamas’ new policy document.

On July 8, press sources talked about an imminent agreement between Hamas and Israel on a prisoner exchange deal, brokered by Russia and Egypt.

Abdul Sattar Qassem, a professor of political science at an-Najah National University in Nablus, told Al-Monitor, “The recent Hamas-Russia rapprochement is linked to Moscow's desire to return to the Arab region, gain a foothold in the Palestinian cause and break the US monopoly on managing the peace process between Palestinians and Israelis.”

Qassem added, “Russia is well-aware that if it improves its relationship with Hamas, it could gain access to the rest of the Islamic movements in the region thanks to Hamas’ influence among them — especially the Muslim Brotherhood in several Middle East countries. In addition, [Jagaryan’s] statements were made from Tehran, which reflects a Russian-Iranian consensus over Hamas’ return to the Iran-led axis of resistance.”

On June 15, Russian Ambassador to Tel Aviv Alexander Schein refused to classify Hamas as a terrorist organization and objected to Israel putting the movement in the same category as the Islamic State (IS). Schein’s statement was justified by the fact that the Russian judiciary defines terrorist organizations as groups carrying out terrorist acts on Russian territory, which is not the case with Hamas.

This Russian position has had a negative impact on Israel. On July 15, author Ariel Polstein wrote in the Israel Hayom newspaper, which is close to Prime Minister Benjamin Netanyahu, that Schein’s statement was bad news for those who wanted to strengthen contacts with Moscow, accusing it of pursuing unethical double standards in terms of classifying terrorism.

Knesset speaker Yuli Edelstein also attacked Hamas in a speech to the Russian parliament on June 28, accusing it of being responsible for the tragic situation under which Gaza’s residents are suffering, claiming that the movement was taking the life of Gazans for granted, just like it does with the life of Israelis.

Mahmoud al-Ajrami, a former Palestinian deputy foreign minister and political expert on Russian affairs, told Al-Monitor, “Russia's recent rapprochement with Hamas is connected to the existing alliance with Iran, which leads the axis of resistance in the region. This is why Russia is seeking to win as much regional points as possible to confront the United States with which there has recently been some tension. Hamas will benefit from this rapprochement and since Russia is a superpower, Hamas would gain a diplomatic cover and turn it to its advantage on the political and media levels.”

At the height of Hamas' political isolation, following the outbreak of the Gulf crisis, Washington described the movement as a terrorist organization and the EU kept it on the list of terrorist organizations. However, today, Hamas considers its rapprochement with Russia a serious breakthrough at the international level, and might deliberately increase contact with Moscow to make sure it has its support in any political or military escalation with Israel.

In this context, Hamas is required to maintain a pragmatic discourse in its international policy toward Russia, as part of the Quartet on the Middle East, to convince it of accepting a Palestinian state on the 1967 borders so that Russia can promote the movement regionally and internationally.