Boosting ties with Moscow will come at a cost for Hamas

Establishing a relationship with a superpower such as Russia bodes well for Hamas, but Moscow will expect flexibility on the movement's part in return. 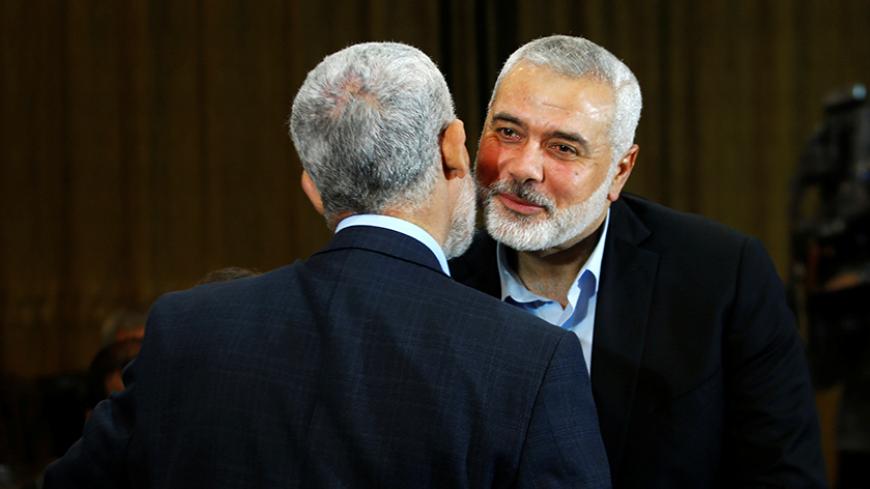 A Hamas-Russia rapprochement has recently started to take shape despite the decline in Hamas’ regional and international relations, especially after the outbreak of the Arab Spring revolutions in early 2011.

On May 18, the Russian Foreign Ministry praised Hamas’ new policy document, issued on May 1, which it considered a step in the right direction. It also welcomed the election of Ismail Haniyeh as the head of the movement's political bureau on May 6, replacing Khaled Meshaal.

On May 19, Haniyeh phoned Mikhail Bogdanov, Russia's deputy foreign minister and special presidential representative for the Middle East, and discussed bilateral relations as well as the Palestinian prisoners’ hunger strike in Israeli prisons that was happening at the time, the Russian role in achieving national reconciliation between Fatah and Hamas, and the new policy document.

Speaking about this rapprochement, Hamas spokesman Hazem Qassem told Al-Monitor, “Hamas considers Russia a superpower with great influence on international politics, and the movement is ready to open up to Russia if it serves the Palestinian interests without conflicting with its principles. The two have been in contact over the years, especially since Hamas welcomes any party — except the Israeli occupation — that tries to communicate with it, to achieve Palestinian aspirations for independence.”

Russia might as well be the only superpower to have had positive relations with Hamas since it won the 2006 legislative elections in the Gaza Strip. A Hamas delegation headed by Meshaal had visited Moscow in March 2006, and Meshaal met with former Russian President Dmitry Medvedev on a different occasion in Damascus in May 2010.

On Aug. 3, 2015, Meshaal hosted Russian Foreign Minister Sergey Lavrov in Qatar, and Lavrov invited him to visit Moscow — but Meshaal is yet to do so.

Bogdanov met Meshaal in Doha on Aug. 17, 2016. On April 4, Hamas condemned the bombing of the St. Petersburg metro. Before that, on Jan. 15, a Hamas delegation arrived in Moscow to discuss the Palestinian situation and met with Lavrov.

A Hamas official who has attended several meetings between Hamas and Russian officials over the past year told Al-Monitor on condition of anonymity, “During the meetings with Russian officials, Hamas was able to convey its vision of the conflict with the Israeli occupation and its desire to mobilize international positions in support of the Palestinian cause, as well as negate all Israeli attempts to link the Palestinian resistance to terrorism.”

Hussam al-Dajani, a political science professor at Al-Ummah University in Gaza, told Al-Monitor, “Hamas' relationship with Russia could pave the way for the movement to regain its position as part of the political process in the region. Russia is a member of the International Quartet [on the Middle East], and I expect Haniyeh to visit Moscow on his next tour, although no date has been set yet.”

The mutual interests between Hamas and Russia may lie with the latter's desire to form regional alliances to serve its interests and to improve the Russian image vis-a-vis the Muslim world by linking itself to a large Islamic movement such as Hamas. Meanwhile, during the meetings held between 2006 and 2016, it seems Hamas wanted Russia to break the siege imposed on Gaza since 2006. In addition, this helps Hamas become more open to the world in order to ease international pressure.

In this context, Ahmed Yousef, a former political adviser to Haniyeh, told Al-Monitor, “Hamas is going to strengthen its relations with Russia to face the pressures that may come from international and regional forces, such as the United States and Israel. However, for the Russian-Hamas relationship to work, the movement needs to show flexibility in its political positions in a way that does not contradict its national principles.”

Meanwhile, a Palestinian official close to President Mahmoud Abbas told Al-Monitor on condition of anonymity, “Hamas should not get its hopes up regarding the future of its relationship with Moscow. The latter is part of an international system and any link it wants to have with the movement depends on Hamas’ response to the requirements of the peace process, such as recognizing the agreements between the PLO and Israel. So long as Hamas is turning its back on these commitments, all it is going to get out of this relationship with Russia are commemorative photos with its officials.”

The rapprochement between Hamas and Russia coincides with US hostility toward the movement, especially between September 2015 and April 2017, when the United States added a number of Hamas leaders on its list of terrorists. The latest US position was announced by US President Donald Trump in Saudi Arabia on May 21, when he placed Hamas, Hezbollah and the Islamic State in the same category, as terrorist groups, which angered Hamas.

Al-Monitor obtained an unpublished internal Hamas document that states, “Hamas’ relationship with Russia defeats the Israeli approach to isolate the movement internationally. The Russian position shocked the Israeli occupation that is currently leading a diplomatic campaign against Hamas in an attempt to shut it out. The fact that Hamas and Russia continue to meet indicates that the movement is breaking free from the blockade imposed on it [by Israel] with a shot in the arm from the United States.”

Adel Sattar Qassem, a professor of political science at An-Najah National University in Nablus, told Al-Monitor, “Hamas' road is not paved toward Russia. The latter is a superpower whose political considerations will not allow it to welcome Hamas with arms wide open without expecting something in return. Russia may be cautious about its rapprochement with Hamas, which is now keeping Iran at an arm’s length after their dispute over the Syrian crisis. Meanwhile, Iran is keeping itself in the loop when it comes to the rapprochement between Moscow and Hamas because it wants to bring the movement back to its axis. This was made clear when Iranian Foreign Minister Mohammad Javad Zarif congratulated Hamas on May 9 for electing Haniyeh.”

In the midst of the Russian rapprochement with Hamas, the Palestinian Information Center reported May 18 that the movement had made its way into modern Russian literature, by being mentioned in a recent novel by Russian writer Alexander Prokhanov called “The Orientalist” — released in 2016. The novel narrates the story of a Russian intelligence officer who arrived in Gaza through the tunnels and met with Izz ad-Din al-Qassam Brigades, Hamas’ military wing.

Developing a relationship with a superpower such as Russia bodes well for Hamas’ security situation; the movement can use this rapprochement to protect itself against any international pressure. However, Moscow is not a charity and Hamas will undoubtedly have to show some flexible political positions regarding the conflict with Israel in return. Although Russia has already seen this intention in Hamas’ new policy document, the movement will have to take action to prove its flexibility.