Hamas is keen on keeping mum about Russia’s war on Ukraine, following lessons learned from the Arab Spring. 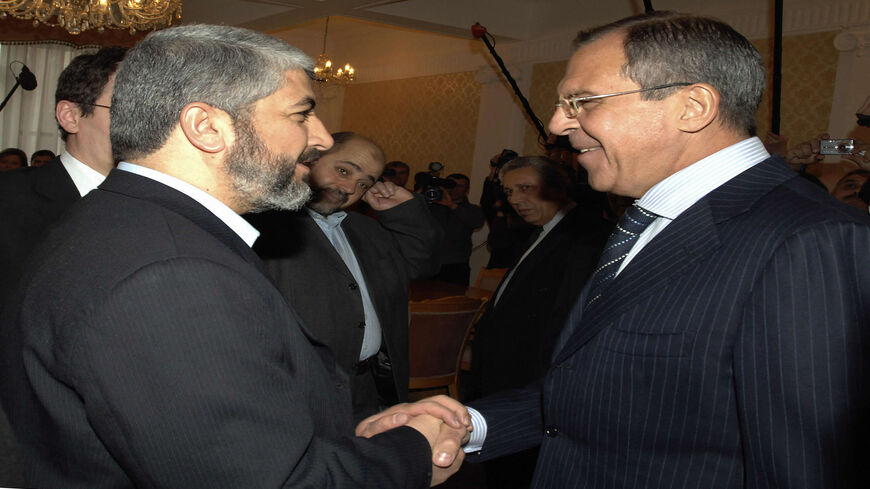 Following in the footsteps of the Palestinian Authority (PA), Hamas is keen to remain silent on the Russian military attack on Ukraine, which was launched by Russian President Vladimir Putin Feb. 24.

Hamas has been increasingly isolated on the international scene, having received a political blow from several Western countries. On Nov. 26, 2021, the United Kingdom declared Hamas a terrorist organization. On March 3, Australia also classified it as a terrorist group.

In September 2001, the European Union listed Hamas as a “terrorist group” in the aftermath of the attacks in the United States on Sept. 11, 2001. But in December 2014, the Court of Justice of the European Union (CJEU) issued a ruling to remove Hamas’ name from the terrorist lists citing an error in judicial procedures.

Meanwhile, the United States has classifed Hamas as a "terrorist group” since Aug. 9, 1997, according to Article 2019 of the American Immigration and Nationality Act, despite the fact that Hamas defines itself as per its political charter issued in May 2017 as a “Palestinian national liberation and resistance movement, whose goal is the liberation of Palestine and the confrontation of the Zionist project, with Islam being its reference, goals and means.”

Official contacts between Hamas and Russia began after the movement’s victory in the 2006 legislative elections. A Hamas delegation led by Khaled Meshaal, then-Hamas’ political bureau leader, met Russian Foreign Minister Sergey Lavrov during a visit to Moscow in March 2006. Back then, Meshaal stressed that there wouldn’t be peace as long as Israel did not withdraw from the occupied Palestinian territories of 1967.

On May 18, 2017, Russia blessed the new Hamas political document issued May 1 of the same year, considering it a step in the right direction, and welcoming the election May 6 of Ismail Haniyeh as the head of the movement’s political bureau, succeeding Meshaal.

In March 2020, during a meeting with Lavrov in Moscow, Haniyeh welcomed Russia’s position rejecting the US Middle East peace plan, known as the deal of the century, announced by former US President Donald Trump in January 2020.

“The deal does not represent a way to bring peace and security to the region,” Haniyeh said at the time.

Hamas leaders have visited Moscow several times over the past 14 years, i.e., since Hamas’ victory in the 2006 legislative elections, most recently in December 2021.

It appears that Hamas has no intention of allowing the Ukrainian crisis to strain its relations with Moscow.

The Palestinian resistance movement was quick to deny Feb. 26 statements attributed to Meshaal, now head of the Hamas office abroad, regarding the Russian-Ukrainian crisis, as saying, “Putin must stop his invasion of Ukraine and the killing of civilians.”

Mousa Abu Marzouk, deputy head of Hamas' political bureau, tweeted the same day, “The lesson that one can draw from the Russia-Ukraine war is that the time of America’s era as a unipolar superpower is over.”

Yahya Moussa, Hamas leader and Legislative Council deputy, told Al-Monitor, “The Russia-Ukraine war is a struggle between big players — Russia, America and Western countries — with the aim of redrawing the geopolitical map in the world.”

He said, “Hamas is outside this game.”

Moussa noted that his movement is a resistance group committed to “fighting the Israeli occupation, calling for the freedom of all peoples of the Earth and at the same time sympathizing with those who are subjected to human rights violations.”

He said, “The war in Ukraine, however, revealed the double standards of the West, which was at the root of the Palestinian people’s suffering,” referring to the Balfour Declaration of Nov. 2, 1917, which promised Jews a homeland in Palestine.

Moussa added, While Hamas is designated as a terrorist group, the West is supporting the Ukrainian popular resistance financially, politically and militarily."

Iyad al-Qarra, political researcher and writer close to Hamas based in the Gaza Strip, told Al-Monitor, “The Russian war on Ukraine is an international issue, and Hamas does not have to take a position on the conflict.”

He said, “The movement is exercising caution and keeping silent on the warfare to avoid further isolation, especially after the United Kingdom designated it as a terrorist group on Nov. 26, 2021, and Australia on March 3."

Qarra added, “Should the war escalate in Ukraine, Hamas is required to maintain good relations with Russia and at the same time avoid tension with European countries and the United States, which consider Hamas a terrorist group."

Walid al-Mudallal, professor of political science at the Islamic University of Gaza, told Al-Monitor, “Hamas paid the price of supporting the Arab Spring revolutions,” referring to the Syrian revolution against President Bashar al-Assad that caused Hamas to exit Damascus in November 2011.

“This was a lesson for Hamas. It knows now that it should keep mum about the Russian-Ukrainian crisis,” he noted.

He believes it would be best for the Palestinian movement to stick to a policy of positive neutrality, “meaning to keep the same distance from all parties to the conflict, and when the time is right, call for negotiations and a peaceful solution to the war.”

Ibrahim Abrash, professor of political science at Al-Azhar University in Gaza, told Al-Monitor, “The war expands to include the Middle East, embroiling Russia’s ally — Iran — the latter may require its allies in the Arab world, like Hezbollah in Lebanon and Hamas in Gaza, to take a clear position in support of Russia.”

He said, “However, Hamas’ relations with Iran are based on interests, in terms of military and financial support in resisting Israel, unlike the ideological alliance that exists between Tehran and Lebanon’s Hezbollah.”

“Hamas is Sunni, while Iran is Shiite. This means that Hamas could change its alliance with Iran, should the latter request it to take Russia's side. Hamas is a pragmatic movement, seeking to be on good terms with both sides of the conflict — Russia, on the one hand, and Western countries and the United States, on the other,” Abrash said.

Hani Habib, political writer for the Palestinian Al-Ayyam newspaper in the Gaza Strip, told Al-Monitor, “Hamas’ silence regarding the war on Ukraine is part of its policy of noninterference in the affairs of states, according to Article 37 of Hamas’ general policy principles issued in May 2017.”

He said, "Hamas has no interest in taking sides in this warfare. In any case, its position does not weigh in the balance of power in the ongoing conflict."