Hamas appeals to Russia for support in confrontation with Israel

A Hamas delegation visited Moscow at a time when relations between Russia and Israel are taking a more tense turn due to Israel’s position in the Russia-Ukraine war. 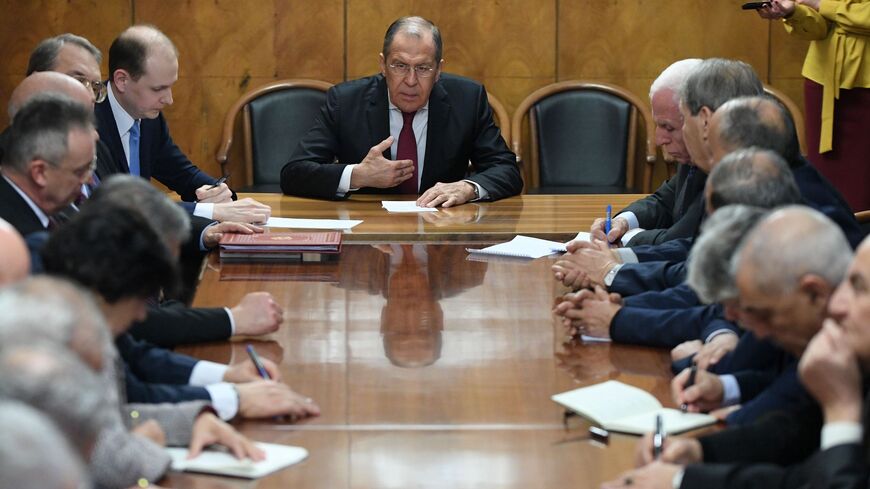 Russian Foreign Minister Sergey Lavrov meets with representatives of Palestinian groups and movements, who are in Moscow for intra-Palestinian talks, on Feb. 12, 2019. - KIRILL KUDRYAVTSEV/AFP via Getty Images

GAZA CITY, Gaza Strip — A Hamas delegation visited Moscow on May 4, where it held talks with Russian officials at the Russian Foreign Ministry’s guesthouse. The talks concluded on May 5.

Hamas’ visit to Moscow came at a time when Russian-Israeli relations are tense due to Israel’s condemning position of Russia’s war on Ukraine.

Relations between Moscow and Tel Aviv turned sour after the latter condemned the Russian attack on Ukraine and considered it a “flagrant violation of the international order.”

In a statement published by Russia Today on April 15, the Russian Foreign Ministry said that Israel is trying to “exploit the situation around Ukraine to divert the international community’s attention from the Palestinian-Israeli conflict, which is one of the oldest unresolved conflicts.”

On May 4, Israeli President Isaac Herzog demanded that Russian Foreign Minister Sergey Lavrov apologize for statements he made regarding the Jewishness of Ukrainian President Volodymyr Zelenskyy and his connection to Nazism, and for his remarks that “Hitler had Jewish blood.”

Tensions between the two sides rose following the statements of Russian Foreign Ministry spokeswoman Maria Zakharova during an interview with Radio Sputnik on May 4, when she said that “Israeli mercenaries” are fighting in Ukraine side by side with the fighters of the Azov Battalion, which is considered one of the fiercest opponents of the Russian forces.

After meeting with Russian officials, Abu Marzouk said in statements to Al-Mayadeen TV on May 5, “New equations are being imposed today in the global system, and there is an opportunity to change the status quo in the global system for the benefit of the oppressed in the world.”

He added that the change in the world order would affect the future of Israel.

A leading source in Hamas who was among the visiting delegation to Moscow told Al-Monitor on condition of anonymity that this visit was “unique and exceptional” in terms of the delegation’s members and the topics discussed with Russian officials.

The source explained that the delegation met with Russian Deputy Foreign Minister Mikhail Bogdanov and others in the Russian Federation Council and Senate, with discussions touching on the Israeli attacks on Christian and Islamic holy sites in Jerusalem.

“Talks with Russian officials, however, were more focused on developing Russian support for the Palestinians, taking relations between Hamas and Moscow to new, advanced levels, and breaking the Israeli siege imposed on the Gaza Strip since 2007,” he added.

Head of Hamas in the Gaza Strip Yahya Sinwar announced during a speech in Gaza on April 30 that the maritime line to break the Israeli siege imposed on the Gaza Strip will be inaugurated in the coming period in coordination with the “Jerusalem axis,” in reference to mainly Iran and Hezbollah — an axis that brings together interests and an alliance with Moscow on several international issues, most notably the Syrian conflict.

The Hamas delegation in Moscow also met with the head of the Iftaa Council in Russia, Sheikh Rawi Ein al-Dein, who affirmed the sympathy of Muslims in Russia with the Palestinians in their conflict with Israel and said that they (Russian Muslims) would provide any possible assistance to the Palestinians, according to the Hamas source.

He added that the Hamas delegation also met with the leader of the Chechen Republic, Ramzan Kadyrov, in Moscow, in the first such meeting between the two sides, which aimed to lay seeds for establishing ties between Hamas and Grozny, the capital city of Chechnya.

Commenting on how relations between Moscow and Hamas would evolve following this visit, the source said, “It is premature to talk about the form of this relationship, but things are very positive, and this visit will be repeated next month and will be followed by other visits.

He added that Moscow “is taking a more advanced position in looking after Palestinian interests.”

Walid al-Mudallal, a professor of political science at the Islamic University of Gaza, told Al-Monitor, “Moscow is very interested in developing new tools to influence its Western opponents regarding the Russian-Ukrainian crisis.”

“Meanwhile, Hamas needs to strengthen relations and develop cooperation with Moscow as a superpower in the world. It finds the Russian-Ukrainian crisis an ideal opportunity to do so. Friendly relations between Moscow and Hamas will benefit both parties,” he added.

Mudallal indicated that Moscow’s tendency to develop relations with Hamas might prompt Tel Aviv to change its stance toward the war on Ukraine.

Mudallal said that it was not likely for relations between Moscow and Hamas to develop to the extent that Moscow would provide Hamas with weapons and money, adding, “Such support can be done in indirect ways, through Iran and Hezbollah, which have forged an alliance with Moscow in the face of the United States in many international issues, most notably the Syrian issue.”

Ibrahim Abu Jaber, director of the Center for Contemporary Studies in the city of Umm al-Fahm in northern Israel, told Al-Monitor, “Tel Aviv is concerned about this visit,” stressing that any tremor in relations between Russia and Israel would play into the Palestinians’ hands.

Hamas has recently intensified its incitement rhetoric against Israel and encouraged the implementation of operations against Israeli targets in response to Israel’s escalation at Al-Aqsa Mosque in Jerusalem.

On May 2, Hamas claimed responsibility for the April 28 shooting at the entrance of the Ariel settlement near Salfit in the northern West Bank that killed one Israeli security guard.