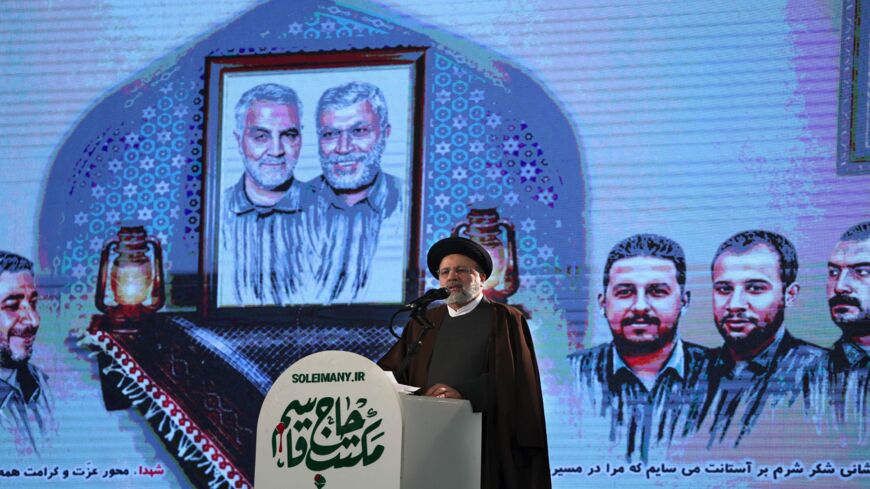 Iranian President Ebrahim Raisi delivers a speech during a ceremony in the capital, Tehran, on Jan. 3, 2022, commemorating the second anniversary of the killing in Iraq of Iranian commander Qasem Soleimani and Iraqi commander Abu Mahdi al-Muhandis in a US drone strike. - ATTA KENARE/AFP via Getty Images

On the second anniversary of the assassination of Islamic Revolutionary Guard Corps (IRGC) Quds Force commander Gen. Qasem Soleimani, who was killed Jan. 3, 2020, near Baghdad International Airport by a US drone, Hamas participated in a commemoration ceremony that the Palestinian Committee held on International Quds Day in Gaza City. Speaking on behalf of Hamas, head of its politburo Ismail Haniyeh had called Soleimani the “martyr of Jerusalem” during the movement’s participation in his funeral procession in Tehran Jan. 6, 2020.

On Jan. 3, Hamas politburo member Mahmoud al-Zahar said in his speech on behalf of the Palestinian factions during Soleimani’s commemoration ceremony, “Qasem Soleimani did not differentiate between the separate Islamic sects. He was the first to fund the resistance government formed after the 2006 elections to pay the salaries of its employees, aid poor families and back the resistance programs.”

In an interview on the Qatari Al-Jazeera channel Jan. 2, Haniyeh confirmed that “Iran was the main funder for the plan of defense for Gaza after the 2009 war to build the resistance bases including missiles, tunnels and anti-armors. The plan funds amounted to a lump sum of $70 million and significantly shifted the resistance potential, which appeared in the 2012 war. For the first time, Hamas managed to strike Tel Aviv with a 75-km range missile in reaction to Israel’s assassination of Izz ad-Din al-Qassam Brigades leader in Gaza Ahmed al-Jabari.”

The roots of relations between Hamas and Iran date back to 1990 when a Hamas delegation visited Iran three years after the founding of Hamas at the end of 1987. Following the visit, a diplomatic representation office for Hamas was opened in Iran in 1992, constituting an Iranian recognition of Hamas’ central role in Palestine.

Israel’s shunning of hundreds of Hamas leaders to southern Lebanon in 1992 was an important milestone in strengthening relations between Hamas and the IRGC, when Soleimani visited the camps of dismissed Hamas leaders in Marj al-Zohour. Ties with Hezbollah, Iran’s ally in Lebanon, were also cemented. After relations between Hamas and Iran were strengthened, Iran provided political and financial support and military manufacture technology, in addition to military training for Hamas fighters.

However, the main milestone in the relationship between Hamas and Iran was Hamas’ victory in the 2006 legislative elections, which led to an increase in the importance and centrality of the movement to Iran, which doubled its financial support for Hamas and promised it $50 million.

After the movement’s victory in the elections, Israel and its Western allies imposed political and economic sanctions on the Hamas government. Then, in the wake of Hamas’ elimination of Fatah's presence in Gaza in 2007, Israel and Egypt tightened their siege on the Gaza Strip. However, the ascension of the Muslim Brotherhood headed by Mohammed Morsi to power in Egypt resulted in opening the Rafah crossing and reducing economic pressure on the movement. On the other hand, the international and regional boycott of the Hamas government played a key role in pushing the movement toward closer relations with Iran.

Hamas’ exit from Syria, the movement’s headquarters, in 2012 after its refusal to interfere in the Syrian developments and its siding with the Syrian revolution reduced Iranian support for it. Yet Hamas’ persistence in the 2012 war led to the resumption of military support for the movement, although this support was limited to its military wing and did not involve funding its political leadership.

On the other hand, Egypt and the Gulf states, led by Saudi Arabia, played a role in keeping Hamas away from Iran by encouraging Hamas to leave Syria and pushing for Palestinian reconciliation to include Hamas on the Sunni axis versus the Iranian Shiite axis. However, these countries did not provide a political, financial or military alternative that would encourage Hamas to let go of its ties with Iran. Rather, they pressured Hamas after the fall of the Muslim Brotherhood in Egypt in 2013, and Saudi Arabia tightened the grip on Hamas by arresting 60 of its members. UAE Foreign Minister Sheikh Abdullah bin Zayed Al Nahyan called on Western countries to classify Hamas as a terrorist movement.

Iyad al-Qarra, writer and political analyst from Gaza who has close ties with Hamas, told Al-Monitor, “Hamas chose to commemorate the second anniversary of Qasem Soleimani's martyrdom in Gaza as part of its overt loyalty to Iran, which is under regional and international pressure in the nuclear file. Iran is the only support of Hamas on the military front.”

He added, “Hamas' praise of Iranian support at the military level indicates the strategic relationship between Hamas and Iran. It is also a message for Iran that Hamas is on its side in light of the continuous Israeli threats to wage war against Iran over the nuclear file. Therefore, Iranian military and financial support for Hamas will continue.”

Hassan Abdo, writer and political analyst from Gaza who is close to the Islamic Jihad movement, told Al-Monitor, “Haniyeh's statements on Al-Jazeera television about Iran's military and financial support for Hamas showed that his stance represents Hamas as a whole. This came after Khaled Meshaal, head of Hamas’ diaspora office, visited Lebanon on Dec. 15, and the decision of Hezbollah, Iran’s ally in Lebanon, to boycott Meshaal due to Hamas leadership’s retreat from Syria and the transfer of the Hamas leadership office to Doha during Meshaal’s leadership of the Hamas political bureau from 1996 to 2017, and his declaration of alignment with the Syrian revolution, which opposes the regime of Bashar al-Assad, an ally of the Lebanese Hezbollah.”

Mukhaimar Abu Saada, professor of political science at Al-Azhar University in Gaza, told Al-Monitor, “Hamas and political Islam in the Arab region are in a state of persecution, and there are serious attempts to eliminate the Muslim Brotherhood, of which Hamas is a part, and therefore Hamas has no choice but to align with Iran.”

He believes that Hamas' public declaration of Iranian financial and military support will prolong the state of estrangement between Hamas and the Arab regimes opposing Iran, such as Saudi Arabia and the UAE, which consider Iran a major threat to their existence. This will also prolong the crisis, as the remaining Arab countries, such as Qatar and Oman, have opted for impartiality. The countries that will have the worst relations with Hamas are Saudi Arabia, the UAE and Egypt to some extent, as Egypt and Hamas have common interest in maintaining the stability of the situation in the Sinai Peninsula from armed groups.

He added, “On the other hand, the Palestinian rift will perpetuate because the [Palestinian Authority] has sided with the Sunni axis — Saudi Arabia, the UAE and Egypt — and Hamas chose the axis of resistance with Iran and Hezbollah.”

He referred to Hamas' attempts to rebuild relations with Arab countries. However, the prospects are not promising, given their resentment of the Muslim Brotherhood, which Hamas is part of.