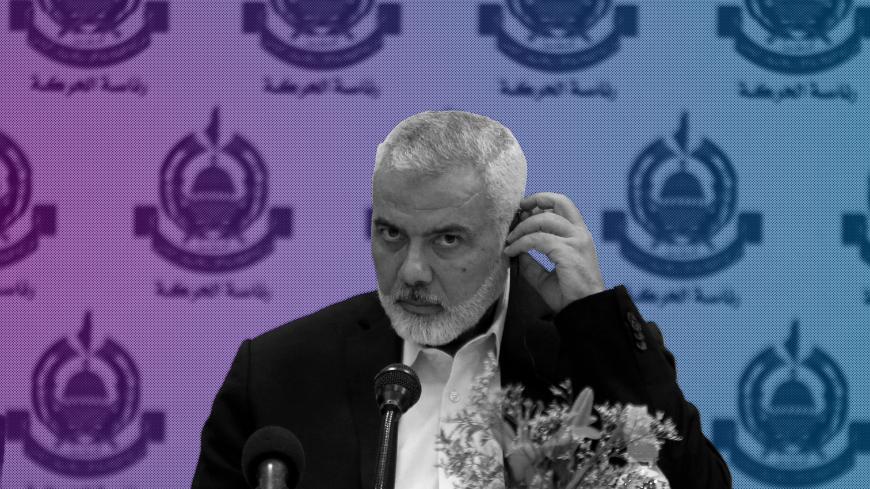 Hamas chief Ismail Haniyeh attends a meeting with members of the international media at his office in Gaza City, Gaza, June 20, 2019. - REUTERS/Mohammed Salem

The US assassination Jan. 3 of Iran's Islamic Revolutionary Guard Corps' Quds Force commander Qasem Soleimani has been a bombshell in the news. Yet Hamas politburo chief Ismail Haniyeh’s visit Jan. 6 to Iran for Soleimani's funeral is creating quite a stir itself in the Middle East.

Haniyeh, who hadn't visited Iran since 2012, was accompanied this time by a Hamas leadership delegation. He was the only non-Iranian figure to speak at the funeral, and Soleimani's daughter mentioned Haniyeh, along with other Iranian allies, as figures who will avenge her father’s killing.

Soleimani contributed greatly to Hamas' power, but Haniyeh affirmed that the Palestinian resistance won't break down with his passing. In fact, Haniyeh and his delegation met that same day with Soleimani's successor, Esmail Ghaani.

"[Haniyeh's visit] was made out of loyalty to Hamas’ allies," Qaddoumi said, adding, "On the sidelines of the funeral, Haniyeh met with the Iranian state pillars. Iranian officials greatly welcomed the Hamas delegation.”

He added, “Hamas perceives Soleimani’s assassination as an inadmissible crime. We don't rule out [the possibility] that Israel might plan similar idiocy against our leaders. But we are taking precautions."

Haniyeh’s busy agenda during the visit probably indicates Iran and Hamas have turned the page on their ambivalent relations — which suffered particularly following their dispute over the Syrian crisis in 2011 — and moved into a new phase of alliances at the highest level.

It's no secret that Hamas-Soleimani relations were firm. Tehran is a key supporter of the movement in terms of arms and combat equipment. Hamas is fully banking on Haniyeh’s visit as a decisive, positive move in its relations with Iran and aims to form a strategic alliance.

Today, Hamas is looking for Qaani’s determination to continue providing the movement with financial and military support. Qaani’s meeting with Haniyeh was perhaps designed to reassure Hamas in this regard.

Haniyeh's visit coincides with the harbinger of a US-Iran face-off. Iran fired missiles at Iraqi military bases hosting US forces in Iraq Jan. 8. Any additional exchanges could relegate Iran’s support for Hamas to a later stage, while it focuses on its confrontation with the United States. Haniyeh’s visit could be aiming to keep Hamas’ support a priority to Tehran.

Not everyone thought Haniyeh's visit was a good idea. Speaking to Al-Monitor on condition of anonymity, a Palestinian official in Ramallah said, “Soleimani’s assassination is part of the US-Iranian conflict, and the Palestinians have nothing to do with that. This makes Haniyeh’s visit a bad move; they have no business there.”

At the regional level, there were reports that Haniyeh's visit to Tehran could produce an undesirable response from Egypt and Israel, and that he might have to wait longer abroad before he gets Egypt's approval to return to the Gaza Strip.

A reliable Egyptian source told Dar al-Hayat news Jan. 7 that Egypt is unhappy about the visit, and that Haniyeh is well-aware of this position. Saudi Arabia’s Okaz newspaper reported Jan. 6 that by visiting Iran, Haniyeh has become a dependent of Tehran.

Even some Hamas supporters criticized Haniyeh on Twitter for visiting Tehran and praising Soleimani.

But Hamas official Abdul Rahman Chedid told Al-Monitor, “Soleimani was not only an Iranian general but also a supporter of the resistance’s potentials on more than one front.” He added, “Soleimani’s absence will not have a negative impact on the support Iran provides us with. This support is expected to grow in anticipation of a battle that could be ignited at any moment.”

He noted, “Egypt should not be concerned about the visit, because this visit will not come at the expense of our relations with [Cairo]. Hamas is open to all countries and looks forward to strengthening its relations with them.”

Haniyeh's trip to Tehran could reflect Hamas' intention to forge a real alliance with Tehran rather than seeking its military and financial support only. Such an alliance would develop into a strategic integration with Iran, placing Hamas at the heart of regional politics, although Hamas stresses its independent decision-making.

Osama al-Ashqar, a political adviser at the Rasid Group for Research & Sciences, told Al-Monitor, “Hamas has decided to side with Iran, which provides the movement with political, military and media support. There are strategic calculations behind this rapprochement, although the two sides’ views diverge when it comes to Syria.” He added, “Iran, however, will not give Hamas free rein, given the intricacies and complications in their relations regardless of the common denominator in their understandings, which is the fight against Israel. Iran has reservations and fears when it comes to Hamas, and Hamas' strong organizational institutions would stop any dependency on Tehran.”

Hamas spokesman Fawzi Barhoum told Al-Monitor, “Haniyeh’s visit could expand Iran’s military and financial support for the Palestinian resistance, regardless of the person leading the Quds Force. Hamas is dealing with a state, not with figures.”

One can say Haniyeh’s visit portends an official and explicit alliance between Hamas and Iran that would allow the movement to obtain further support. At the same time, various complications could ensue from Hamas joining the Iranian axis’ regional politics, which could result in Saudi Arabia, Egypt and their allies in the Gulf opting for more hostile policies toward Hamas.