Palestinians express conflicting opinions over the US assassination of Iran's Gen. Qasem Soleimani in Iraq, while faction leaders praise him as a martyr. 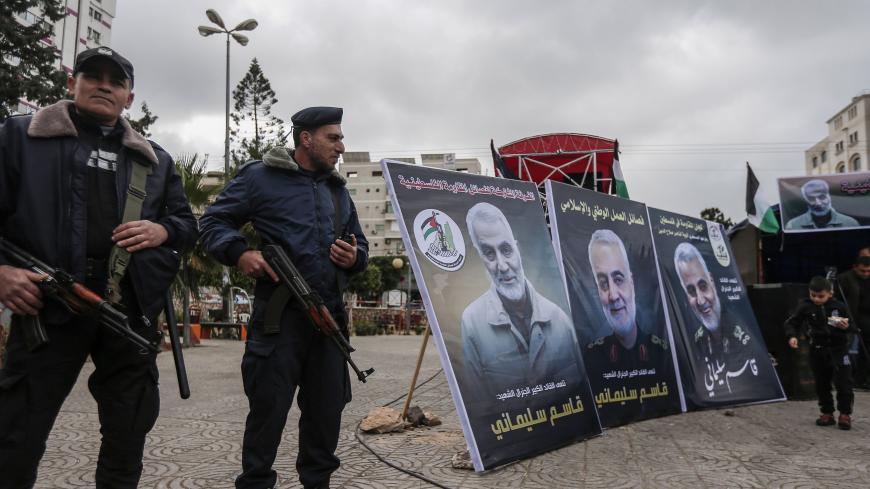 In the Gaza Strip, most Palestinian factions condemned the Jan. 3 assassination. Some leaders of Hamas and Palestinian Islamic Jihad offered Iran condolences at the funeral in Tehran of Soleimani, who led the elite Quds Force of Iran's Islamic Revolutionary Guard Corps.

Meanwhile, however, many Palestinian social media activists rebuked their leadership’s position. They lashed out at Ismail Haniyeh of Hamas, who visited Iran to speak at Soleimani’s funeral and dubbed the general the “Martyr of Jerusalem.” The same opposition to the leadership applied to Palestinians who supported the Arab Spring revolutions, specifically the Syrian revolution.

These Soleimani critics view him as the biggest contributor to the failure of the Arab revolutions that began in 2011 and hold him responsible for the deaths of many Syrians. The deputy head of the Islamic Movement, Kamal al-Khatib, who is known as a Hamas supporter but an Iran detractor, mocked Iran for what he considered its lame response to the assassination. He posted on his Facebook page Jan. 8, referring to missiles Iran launched that struck Ain al-Asad base in Iraq where US troops are stationed: “After a week of Iranian threats, promises ... and fiery statements, we saw a set of Iranian ballistic missiles — or were they plastic missiles that had no effect other than cracking like fireworks?"

On the other hand, Omar Nazzal, a member of the Palestinian Journalists Syndicate, wrote that day on Facebook that Iran's retaliation proves it’s a sovereign country capable of striking the United States and that Washington recognized Iran’s right to respond.

“Even if there were no losses [inflicted by Iranian missiles], even if the response was agreed upon, even if it was staged, this means that the US acknowledges the prestige of Iran and every sovereign state,” Nazzal said.

Palestinian factions in Gaza staged a condolence ceremony Jan. 4 in the Square of the Unknown Soldier, hanging huge banners showing a photo of Soleimani with the expression “Martyr of Jerusalem.” Hundreds attended to pay their respect, spearheaded by the factions’ leaders.

In the West Bank, Fatah and the Palestinian Authority (PA) made no official comment on the assassination. The only statement came Jan. 3 by Fatah Central Committee member Abbas Zaki on Al-Mayadeen satellite channel, who described Soleimani as the “Che Guevara of the Middle East.”

A day after Soleimani’s death, young men organized a vigil in a tent at the Dheisheh Palestinian refugee camp southeast of Bethlehem. The Palestinian archbishop of Jerusalem’s Greek Orthodox Church, Atallah Hanna, attended the service.

This divergence of opinions was also echoed in Palestinian media outlets. Amad news website, which is close to dismissed Fatah leader Mohammed Dahlan, launched an attack on the Palestinian factions that offered condolences to Iran or set up mourning tents in Gaza. Dahlan has strong ties to Mohammed bin Zayed Al Nahyan, who is the crown prince of Abu Dhabi and deputy supreme commander of the United Arab Emirates armed forces.

In a Jan. 7 story, editor-in-chief of Amad Hassan Asfour lashed out at Haniyeh for dubbing Soleimani a martyr. Asfour described this move as a major political fail and as unprecedented political hypocrisy. In a previous article on Jan. 4, Asfour said the mourning gathering held in Gaza for Soleimani was a major mistake, adding that Iran is exploiting the banner of Palestine for sectarian purposes.

For Sari Orabi, a Palestinian expert on Islamist factions, this disagreement among Palestinians regarding Soleimani’s assassination was triggered by the positions of Hamas and the Islamic Jihad, specifically Haniyeh's speech at the funeral in Tehran. Orabi explained to Al-Monitor that this difference was mostly felt among Hamas members, for several reasons, most notably the movement's position on the Syrian crisis and Iran's interference in it. Iran has supported the regime of Syrian President Bashar al-Assad.

“Since the outbreak of the Syrian crisis, Hamas’ rhetoric has always been in support of the Syrian people and against Iran’s interference in Syria through the [proxy] resistance movements,” he said, adding, “To this day, the debate has been growing within Hamas about Iran. This culminated when Hamas mended its relationship with Iran. Hamas’ internal feud about Iran floats to the surface with every meeting between Hamas leaders and Iran and every press statement by Hamas leaders praising Iran.”

Orabi continued, “Hamas has affiliated members in the West Bank, Gaza and abroad. The movement’s members experience different circumstances. Those outside Palestine, especially refugees who lived in the Yarmouk camp in Syria, have the most hard-line stance against Iran. In the West Bank, Hamas has no central organization capable of communicating with its cadres and members, and therefore there is no internal mobilization and political education there. Hamas cadres in the West Bank take individual positions that may conflict with the positions of the movement and its leaders. Meanwhile, in Gaza, Hamas has a strong organization capable of communicating with its members. It constantly feeds them with any developments in the stance of the movement's leadership.”

The internal Palestinian Fatah-Hamas division and the struggle of axes in the region have shaped Palestinians' positions regarding Soleimani’s assassination. Palestinians seem to have found in social media the perfect space to express their conflicting opinions.

The PA’s official media grilled Hamas for sending its leaders to take part in Soleimani's funeral. Wafa, the official Palestinian news agency, published a report Jan. 13 accusing Hamas of pawning itself to external forces and sending positive messages to Israel and the United States on one hand and to Iran on the other. Also, Palestine TV, the PA’s official TV channel, broadcast a video titled “Hamas Continues Its Political Hypocrisy for Partisan Gains." The video accuses Hamas leaders of throwing themselves into Tehran's arms.

In an interview with Al-Monitor, Nader Saeed, head of the Institute of the Arab World for Research and Development, an opinion polling center, noted the longstanding political split between Palestinians: "Some support the PA and its political options and alliances, while others back the resistance and its factions and alliances.”

The division keeps widening as the differences between Arab and regional axes cast their shadow on the Palestinians and shape their positions, he said. Shiite “Islamic and [axis of resistance] factions classify themselves as Iran’s allies, given Tehran’s financial and military support to them," he explained. "Meanwhile, the PA and the factions supporting its political line position themselves as part of the moderate Sunni Arab alliance, specifically Saudi Arabia and the Gulf regimes," Saeed added.