The Hamas delegation returned to the Gaza Strip from a foreign tour in which it sought further support for the Palestinian cause from the international community. 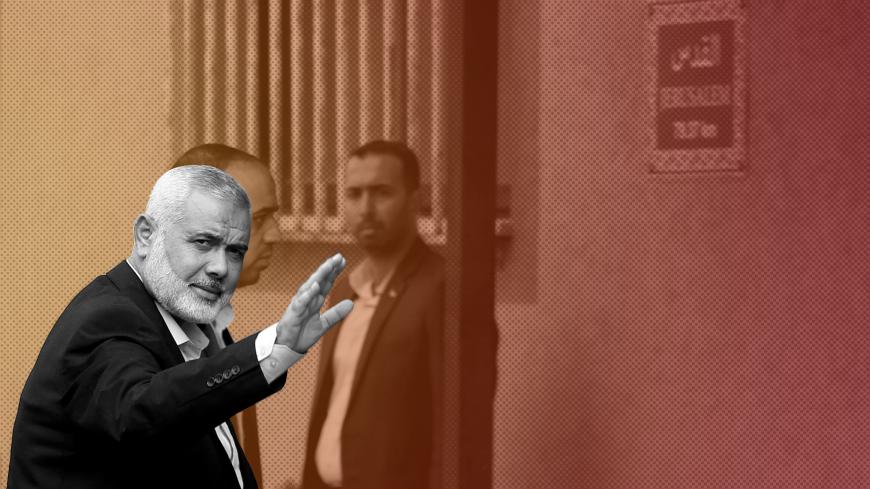 GAZA CITY, Gaza Strip — In an interview with Al-Mayadeen Jan. 10, Mahmoud al-Zahar, a member of Hamas' politburo, said it was very normal for Hamas leader Ismail Haniyeh to meet with the new leader of Iran’s Islamic Revolutionary Guard Corps to discuss the continuation of relations between Tehran and the Islamic movement in Palestine.

Zahar denied allegations that Egypt had banned Haniyeh from returning to the Gaza Strip because of his visit to Tehran, stressing that the Israeli news to this effect is an attempt to incite Egypt into preventing him from doing so.

The Hamas delegation had arrived in the Gaza Strip on Jan. 5 following a weekslong tour to multiple countries, including Qatar, Turkey and Malaysia. Haniyeh did not return but headed instead on Jan. 6 to Tehran to participate in the funeral of slain Iranian commander Qasem Soleimani, who was killed in a US drone strike in Baghdad on Jan. 4.

Egypt allowed Haniyeh to go on a tour for the first time in two years since he took office in 2017.

Hamas spokesman Hazem Qassem told Al-Monitor the movement’s foreign tours are carried out for specific reasons, mainly to drum up political and diplomatic support for the Palestinian cause, highlight the major obstacles facing the Palestinian issue for international leaders and galvanize support for the steadfastness of the Palestinian people on their territory — mainly in the face of the Israeli blockade on the Gaza Strip.

“All these matters were present on the agenda of Hamas during this last tour,” Qassem said.

He said the tour was building upon past ties with the countries visited, stressing that relations with several international stakeholders such as Iran, Qatar and Malaysia have been reinforced on different levels to advance the Palestinian national cause. Without giving details, Qassem said opening horizons with new countries was one of Hamas' goals, and the movement had made progress in this direction. “The tour is not over yet,” Qassem said.

Qassem confidently said relations and contacts with Egypt are ongoing in order to follow up on all issues of common concern, noting communication has not stopped between the two sides.

Ibrahim al-Madhoun, a political analyst close to Hamas who is based in Turkey, told Al-Monitor, “Hamas’ foreign tour was very positive, especially since Haniyeh was able to move freely after two years since he took office.”

“During the tour, Haniyeh met with the Turkish president and the emir of Qatar, not to mention his visit to Tehran. The tour advanced Hamas relations with several Arab and international countries,” he said.

He said Haniyeh is not in a hurry to be back in Gaza, as he will be busy handling internal issues within Hamas and promoting relations with several countries. Madhoun explained that Hamas’ foreign policy is clear and based on opening up to all countries and mobilizing support for Hamas in the face of Israeli challenges. He expected great improvement in ties between Hamas and Malaysia, Lebanon and some Gulf countries in the coming period.

Madhoun asserted that a long-term truce between Hamas and Israel under Egyptian auspices is more Israeli propaganda, and political instability in Israel would make it difficult to make a decisive decision in this regard. “Hamas has clear demands for Israel, which could prevent the outbreak of any future war in Gaza,” Madhoun said.

As for relations with Egypt, he said, “Hamas and Egypt have differences in views, but this does not mean severed ties between the two. Hamas and Cairo are in almost daily contact as Egypt sponsors the calm understanding with Israel. This is not to mention the security coordination between the Islamic movement and Cairo to secure the common border.”

Hussam al-Dajani, a professor of political science at Al-Ummah University in Gaza, told Al-Monitor, “There has not been much talk about the results of Hamas’ foreign tour, but in general it will have a positive on the ground. This will be reflected in the understanding and the support that the visit might bring.”

Dajani expected positive results and gains at the level of the military structure and increased support and coordination with the axis of resistance led by Iran and its allies in favor of Hamas. This is especially true since Haniyeh participated in the funeral of Soleimani.

Dajani, however, explained that Haniyeh’s visit to Iran could adversely impact the movement as it might lose support from some Arab countries that blame Soleimani for the bloodshed in Syria, Iraq and Yemen.

“Hamas wishes to open up to all parties, but the boycott of Hamas by several parties such as the United Arab Emirates and Saudi Arabia prompted the movement to go to Iran. The region is likely to witness changes at the level of Hamas foreign relations,” he said.

Dajani said the opportunity is very favorable to move forward with the calm understandings with Israel, which does not wish to ignite the situation on its border with Gaza. Israel could be pressured by Egypt to implement the parts of the understandings that include the construction of an airport and a commercial port.

But he ruled out the possibility of a long-term agreement between the two, as the Palestinian resistance in Gaza is unlikely to completely restrict itself.

Talal Okal, a political writer for the local Al-Ayyam newspaper, told Al-Monitor, “Hamas will not deviate from its political track but is dealing rationally with regional changes.”

Commenting on the Egyptian delegation, Okal said had there not been a breakthrough between Hamas and Israel concerning the calm understandings, Egypt would not have allowed Haniyeh to go on his tour. He said things are moving in the right direction to control the situation in the Palestinian territories without the need to shuffle the cards.