A delegation of high-ranking Hamas representatives met with Egypt's intelligence chief to discuss a prisoner exchange deal with Israel and a potential truce in Gaza, but Hamas wants to include Jerusalem as well. 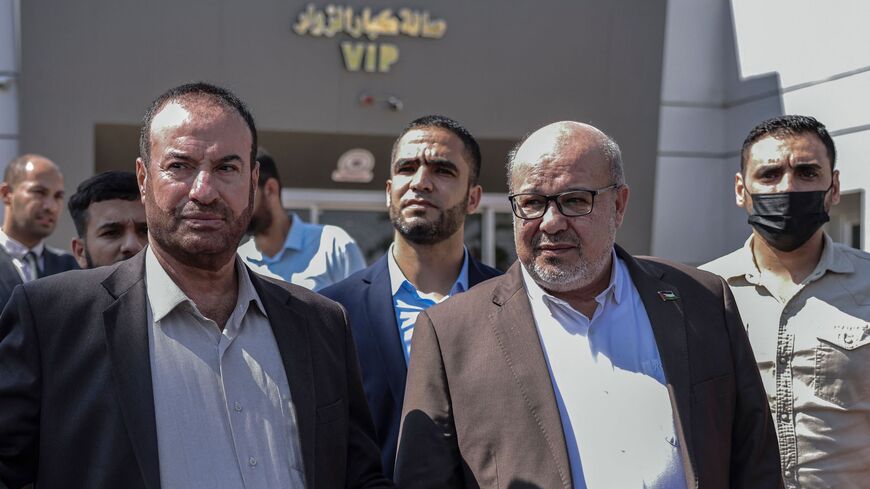 Palestinian official Issam al-Daalis (R) from Hamas' political bureau stands outside the VIP hall at the Rafah border crossing with Egypt in the southern Gaza Strip on Oct. 3, 2021, as a delegation from Gaza travels to Egypt for talks. - SAID KHATIB/AFP via Getty Images

GAZA CITY, Gaza Strip — In a brief statement on Oct. 6, the Palestinian Hamas movement denied media reports that a long-term truce has been reached with Israel during talks with Egyptian officials in Cairo.

A delegation of high-ranking Hamas officials arrived in Cairo on Oct. 3 for talks with Egypt's intelligence chief, Abbas Kamel, on the latest developments in the Palestinian arena.

After the meeting, Hamas said in a statement that the talks had focused on the issue of Jerusalem, a prisoner exchange deal, a truce with Israel and Israeli inflexibility.

The Al-Araby Al-Jadeed news site reported Oct. 5 that Yaron Blum, the Israeli coordinator for negotiating the return of prisoners of war and those gone missing in action, had arrived in Cairo on Sept. 30 ahead of the Hamas delegation’s visit. According to the report, Blum submitted to Egypt Israel’s outline for a prisoner swap deal.

Hamas leader Mahmoud Mardawi told Al-Monitor that the movement came to Cairo to discuss such developments as the organization of general elections as well as the Judaization of Jerusalem, the repeated raids into Al-Aqsa Mosque and the treatment of prisoners in Israeli prisons, as well as a prisoner exchange deal and a long-term truce between Hamas and Israel.

According to Mardawi, Egypt vowed to pressure Israel to fulfill the provisions of the truce reached after the latest escalation in Gaza in May, namely allowing the reconstruction process, allowing the entry of Qatari aid into Gaza and establishing development projects to ease the economic conditions in the besieged enclave.

“The resistance in Gaza cannot stand in silence while the Israeli occupation renounces its obligations,” Mardawi warned.

He pointed out that Palestinian factions in Gaza are using popular resistance methods on the border fence with Israel to pressure the latter to comply with the agreements after Egyptian mediation has failed.

Mardawi said Hamas is fully prepared to conclude a prisoner exchange deal with the Israeli side on the condition that Israel releases dozens of prisoners who were rearrested after being freed in the 2012 Gilad Shalit exchange deal. He also said Hamas refuses to link a swap deal with the truce file, saying calm in Gaza depends on Israel providing real facilitations to the enclave. He added that he expects the coming weeks to witness a breakthrough in the reconstruction process thanks to Egyptian mediation.

Ibrahim al-Madhoun, a political analyst close to Hamas, told Al-Monitor, “The main reason behind failing to reach a long-term truce in Gaza is Israel’s refusal to link the Gaza file to the ongoing violations in the West Bank and Jerusalem.”

He said, “Hamas refuses to treat Gaza issues as apart from the overall Palestinian cause. The movement will not stand idle if Israel continues to attack Palestinians wherever they are.”

Husam al-Dajani, a professor of political science at al-Ummah University, told Al-Monitor, “A long-term truce may not be welcomed by some Palestinian factions or by regional and international parties that are involved in the Gaza Strip.” He added, “Hamas will not accept a truce that does not include facilitations to the Gaza Strip, including building a port and airport, establishing development projects and guaranteeing free trade movement.”

But despite these challenges, Dajani believes a truce can be reached with the help of American and international pressure on the Israeli side.

He pointed out, “Israel is ready to pay a price in exchange for calm in Gaza, which was made clear after Israeli Foreign Minister Yair Lapid presented his so-called ‘economy for security’ plan that includes economic facilitations to Gaza in exchange for calm.”

Dajani believes the two sides could reach an agreement on a prisoner-exchange deal if Israel makes concessions on releasing prisoners it considers terrorists that Hamas insists be part of any swap deal.

“But no progress will be made in this file unless there is international and American pressure on Israel,” he said. “Egyptian pressure on the Israeli government on this issue will not be enough if it is not coupled with pressure from the international community.”