Six months after truce was declared, Hamas leaders say Egypt is deliberately stalling and siding with Israel to delay aid to the Gaza Strip. 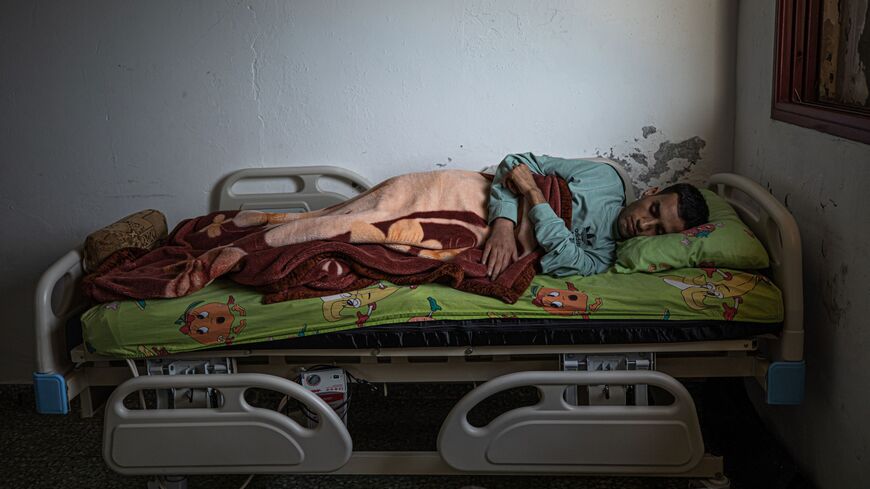 Ismael Abu Ryala, 26, sleeps in his house in Al Shati refugee camp on Dec. 4, 2021, in Gaza City, Gaza. Ismael suffers from hemiplegia of his left side, meningitis and loss of vision and speech, as he was injured by a missile strike on May 17, 2021 during the 11-day war on the Gaza Strip. For many of Gaza's residents who were injured in the conflict the struggle to recover continues more than six months on with limited access to medical treatment. (Photo by Fatima Shbair/Getty Images) - Fatima Shbair/Getty Images

GAZA CITY, Gaza Strip — Tension flared up again between Egypt and Hamas over slow progress in the truce with Israel. Hamas is accusing Egypt of stalling and delaying the execution of the truce understandings that were reached with the Palestinian factions after the last battle in May.

The only demands that have been met were allowing the entry of the Qatari cash grant and the gradual entry of goods through the Kerem Shalom crossing and Salah al-Din Gate in the southern Gaza Strip.

A Hamas leading source spoke to the Qatari channel Al-Jazeera on Dec. 6 on condition of anonymity. “Egypt's behavior is an abandonment of its commitment,” the source said. “We will not allow the current situation to continue. The next stage will prove our credibility.”

The source expressed Hamas' strong dissatisfaction with Egypt's reluctance to fulfill its promises towards Gaza. The source also noted that Hamas’ political and military leadership are studying options for escalation with Israel.

Although days have passed, Cairo remains mute. Israeli Defense Minister Benny Gantz, however, explained Dec. 7 that Israel wants to stop Hamas’s military buildup, achieve a long-term calm, and guarantee the return of the captured and missing soldiers, and he called on Hamas to address these matters.

The return of tension between the two sides follows a few years of improvement during which Egypt offered the Gaza Strip some economic facilities and facilitated Palestinians movement through the Rafah crossing. These efforts, however, were not enough for Hamas.

A Hamas official told Al-Monitor on condition of anonymity that Cairo is siding with Israel and using the treaty's conditions "as a trump card against Hamas. It wants to push the movement to offer some concessions regarding the swap of prisoners.”

The official noted that Cairo had even prevented a Hamas leadership delegation, headed by Hamas leader in Gaza Yahya Sinwar, from traveling through the Rafah crossing in mid-November, on a tour that was to include Cairo, Turkey, Qatar and Iran.

He indicated that Hamas has reliable information, received from sources he refused to name, that the Egyptian stance is more stringent than Israel's on many issues, especially in terms of reconstruction, economic facilities and prisoners’ exchange. “Cairo wants to keep Hamas from scoring any achievements after the recent battle with Israel, so as not to heighten its popularity in the Palestinian street, in light of the fragile situation of the Palestinian Authority and the Fatah movement.”

The official affirmed that Hamas is considering a serious escalation with Israel, and that a meeting of the Palestinian factions will be held soon to approve a gradual field escalation. “This will start with launching incendiary balloons towards southern Israel at the beginning of next week, until the end of this December, which is the deadline that Hamas gave Cairo to implement the understandings in full and without any delay,” the source said.

The Hamas delegation that visited Egypt at the beginning of October, and held several meetings with Egyptian intelligence officials, had described the discussions at that time as positive. The leadership reported that Cairo promised to ease movement through the Rafah crossing, improve the economic conditions and initiate reconstruction. Two months later, Gazans have yet to see any concrete actions.

Meanwhile, living conditions in Gaza are deteriorating, with the Palestinian street pressuring the Hamas leadership to alleviate the impact of the Israeli siege.

On Dec. 7, the UN high commissioner for Human Rights, Michelle Bachelet, described the humanitarian situation in the Gaza Strip as “disastrous.” She noted that the people of Gaza continue to suffer from Israel's 15-year land, sea and air blockade, with vital infrastructure crumbling and a decaying sewer system.

Israeli Foreign Minister Yair Lapid is in Cairo to meet with Egyptian Foreign Minister Sameh Shoukry to discuss the Palestinian issue, the situation in the Gaza Strip and the prisoner exchange file with Hamas.

Lapid's visit to Cairo follows a planned visit by the head of the Egyptian intelligence, Abbas Kamel, to Tel Aviv that did not take place. The visit, which was scheduled for the end of  November, was supposed to focus on strengthening the ceasefire and discussing the prisoner exchange deal between Israel and Hamas. Of note, Hamas had made a proposal to proceed with the prisoner exchange deal, but Israel did not respond.

Iyad al-Qarra, a political analyst and journalist for the Hamas-affiliated Felesteen newspaper in Gaza, told Al-Monitor that tension will flare up on the borders of the Gaza Strip, in light of the Hamas leadership’s anger at Egypt.

“Hamas is unlikely to give any new deadlines to Cairo in its mediation efforts. The movement had given Cairo until the end of this December,” he said, expecting Cairo and Israel to offer some facilities in the coming days to tame the anger of the Hamas leadership.

Tayseer Muhaisen, a professor of international relations at the Islamic University of Gaza, told Al-Monitor that Hamas and the Palestinian factions gave discretion to Egypt on the mediation efforts. “However, these factions were disappointed by Egypt, which is monopolizing political [diplomatic] action regarding the Palestinian issue in light of the geographic proximity and other factors.”

Muhaisen explained that Hamas believes Cairo and Israel are stalling in order to get concessions on the long-term truce and the prisoner exchange. He concluded, “Cairo will try to tame Hamas' anger in the coming days, because the US administration and Israel as well as Egypt do not want to renew military tensions on the Gaza Strip front at the present time, in light of the US’s preoccupation with Iran.”