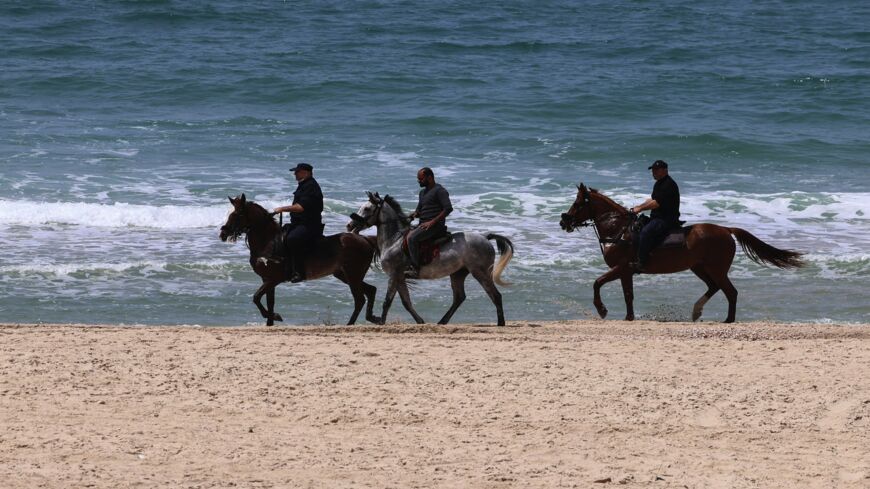 Members of the security forces of the Hamas movement patrol on horseback during a military drill by members of the Mujahideen Brigades, the armed wing of the Palestinian movement of the same name, along the beach in Gaza City, on April 24, 2021. - MAHMUD HAMS/AFP via Getty Images

The drills are also meant to convey political and military messages to Israel and mediators about stalling the end of the blockade and obstructing reconstruction efforts in the besieged enclave.

The military drills began with two exercises dubbed Shield of al-Quds, which includes hundreds of fighters. This took place over two days. The drills will run until the end of December with a joint military maneuver involving all Palestinian armed factions.

Hamas’ drills are taking place in tandem with the Israeli army’s military exercises that started Dec. 14 in the Dimona area dozens of kilometers from the Gaza Strip. They are meant to simulate a full-scale military defense against rocket launches that come from Gaza.

A military official in Hamas’ armed wing who requested anonymity told Al-Monitor said the drills will be held amid fears that Israel might carry out a military or security attack in the Gaza Strip, especially with an increase in drone surveillance flights in Gaza’s airspace in previous weeks.

The last day of Hamas' drills also coincide with the deadline that Hamas communicated to several mediators, notably Egypt, about ending the blockade and resuming reconstruction.

Hamas has previously criticized Cairo for its handling of the negotiations. Egypt has yet to publicly respond, but according to anonymous sources who spoke to Qatar’s pan-Arab newspaper, The New Arab, on Dec. 14, Egyptian intelligence officials privately reprimanded Hamas and Islamic Jihad leaders for the criticism.

In a step that some observers considered an attempt to alleviate Hamas’ anger, Egypt announced the launch of the second phase of the reconstruction process on Dec. 13 during a celebration in Gaza City attended by Hamas government officials, which was preceded by the arrival of an Egyptian engineering delegation to begin reconstruction work.

Khodr Habib, a leader in the Islamic Jihad movement, which is taking part in the military drills, told Al-Monitor, “We will send a clear message that we are running out of patience with the ongoing blockade and the delay in resuming the reconstruction process in Gaza.”

He added that unless their demands are met, “We will go to the end in the military confrontation.”

Hamas previously threatened to start launching incendiary balloons toward southern Israel but had a change of heart after contacts made by Egyptian intelligence officials with Hamas leaders.

He said Hamas and the other factions cannot accept that the thousands of housing units destroyed during the last round of fighting with Israel would remain unrestored and their residents homeless, especially with the onset of winter.

Youssef al-Sharqawi, a retired PLO military major, told Al-Monitor, “Hamas has information about Israeli preparations to strike Hamas’ military sites or assassinate some of its leaders, which prompted the movement to launch these drills as a warning that Hamas is ready for any military escalation.”

Meanwhile, Ayman al-Rafati, a political analyst and researcher at the Center for Regional Studies in the Gaza Strip, told Al-Monitor, “The drills reflect the seriousness of Hamas leader Yahya Sinwar’s threats of a military escalation with Israel should the humanitarian and economic situation of Palestinians remain the same.

Rafati stressed that Hamas wants to send a message that its military capabilities were not affected by the last round of violence in May, and it is ready to take up arms again should the truce talks falter.

Hamas organized several marches throughout the Gaza Strip on its founding date, Dec. 12, during which the movement’s leaders said that they would not remain silent over any stalling over the truce and reconstruction terms.