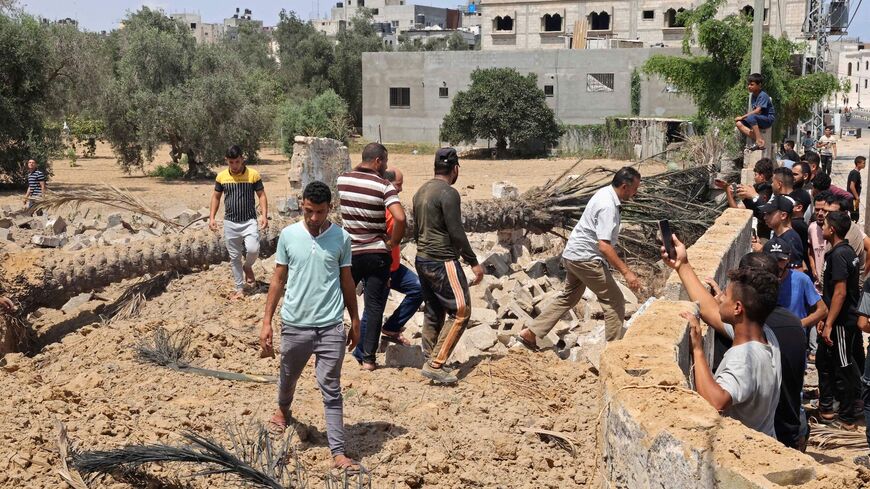 GAZA CITY, Gaza Strip — The Palestinian resistance factions in Gaza launched on Friday a salvo of rockets toward Ashkelon in Israel, targeting small settlements along the border — the first attack since the last round of violence in May 2021.

The missiles came in response to the Israeli army’s assassination on Friday of Taysir al-Jaabari, a prominent Islamic Jihad leader in Gaza, and the commander of the Northern Brigade responsible for the most important military operations of the al-Quds Brigades, the Islamic Jihad military wing.

Jaabari was responsible for field coordination between Hamas and the Islamic Jihad. He was appointed commander of the northern area to succeed Bahaa Abu al-Atta who was killed in an Israeli strike on the Shajaiya neighborhood in eastern Gaza on Nov. 12, 2019.

Jaabari’s assassination came at a time when Egypt has been trying to pressure the Islamic Jihad not to respond to Israel’s arrest on Aug. 1 of one of the movement’s most prominent leaders in the West Bank.

Israel has completely closed the Gaza Strip crossings since last Wednesday in a bid to pressure Palestinian factions not to retaliate militarily to the arrest. This caused further deterioration of the humanitarian situation in the coastal enclave, as patients and travelers have become blocked in and out of the coastal enclave.

In a press statement, Abdel Fattah al-Zarii, undersecretary of the Economy Ministry in Gaza, warned of the repercussions of the continued closing of commercial crossings, stressing that the decision to keep them shut for the third consecutive day “aims at tightening the siege and stifling the population and commercial movement in crossings.”

The situation escalated on Friday when the Israeli army hit Gaza, killing Jaabari along with three of his aides in an airstrike on an apartment in a residential tower in the center of Gaza City.

The death toll rose to 10, including a 5-year-old girl, who were all killed in the same airstrike, according to the Health Ministry.

In a statement issued by the joint operations room of the military factions in Gaza on Friday, the factions said, “We in the joint room confirm that this assassination will not go unnoticed, and that the response will come in the manner determined by the resistance leadership.”

The funeral procession of the victims was swift, starting at Shifa Hospital in Gaza City, with coffins carried on mourners’ shoulders to be buried, as preparation for the military response was underway.

A salvo of rockets was fired from several areas in the city and from its northern part. The Israeli Iron Dome rocket fire lit up the dark Gaza night.

“The resistance is now exercising its right to respond to Israel’s crimes against our Palestinian people, and Israel will pay the price, as its army started the aggression,” Hamas spokesman in Gaza Hassem Qassem told Al-Monitor as he was firing a batch of rockets at the settlements adjacent to Gaza.

The military response from Gaza came a few hours after the speech of Islamic Jihad Secretary-General Ziad al-Nakhala, in an interview with the Lebanese Al-Mayadeen TV channel.

“Tel Aviv will be one of the targets of the resistance’s missiles. There won’t be any red lines in this battle, and the coming hours will prove to Israel that all the forces of the resistance are one and will fight unitedly as one,” he said.

He continued, “To all the fighters of the Al-Quds Brigades and the resistance fighters, I say we will not retreat, and we will not hesitate. This is a field order to our forces and to act according to the set plan.”

The Israeli army claims that the assassination operation was to prevent a major operation against it that was being prepared for the coming days.

Daoud Shehab, the military spokesman for Islamic Jihad in Gaza, told Al-Monitor, “We will respond forcefully and valiantly to this operation.”

“Israel directed a preemptive strike on the Gaza Strip to undercut the Egyptian efforts aimed at calming the situation. This strike came one hour after our contact with the Egyptians, who presented proposals to contain the tension,” he added.

Shehab explained that the Islamic Jihad movement was studying the response to the truce proposals put forward by the Egyptian mediator at the end of the day on Friday and would have dealt positively with them.

However, Egypt’s mediation attempts appear to have fallen on deaf ears among Israelis.

Cairo confirmed that it will not stop trying to mediate between the two sides in order to prevent further escalation in the wake of the Israeli strike.

Palestinian sources told Al-Arabiya that an Egyptian security delegation is heading to Tel Aviv to attempt to defuse tension in Gaza.

Meanwhile, an official Egyptian source announced that Cairo was intensifying its contacts with the Israeli and Palestinian sides to end the current escalation in the Gaza Strip and contain the situation.

“Why didn’t the Egyptians not rush to try and stop this Israeli terrorist attack that took place on Friday? They only came to us to talk us into not responding to the attacks on our leader in Jenin?” Mustafa al-Sawaf, a political analyst and former editor-in-chief of the Hamas-linked Palestinian daily Felesteen, told Al-Monitor. “It seems this mediation is fake and does not benefit the Palestinians.”

“Today, a 5-year-old girl was killed. What was her fault? How many more girls may die if this war continues?” he added.

Ibrahim believes that there is a state of frustration in Gaza due to the normalization of many Arab countries with Israel and Arab silence toward the current operation against Gaza.

“There are many Arab regimes that turned their back on what is happening to the Palestinians, and they are partners today with Israel in their crimes."