Islamic Jihad ramps up the threats toward Israel in West Bank

The Palestinian Islamic Jihad movement in Gaza is currently leading the confrontation with Israel amid calls for an escalation in response to the Israeli army’s assassination of members of the movement in the West Bank. 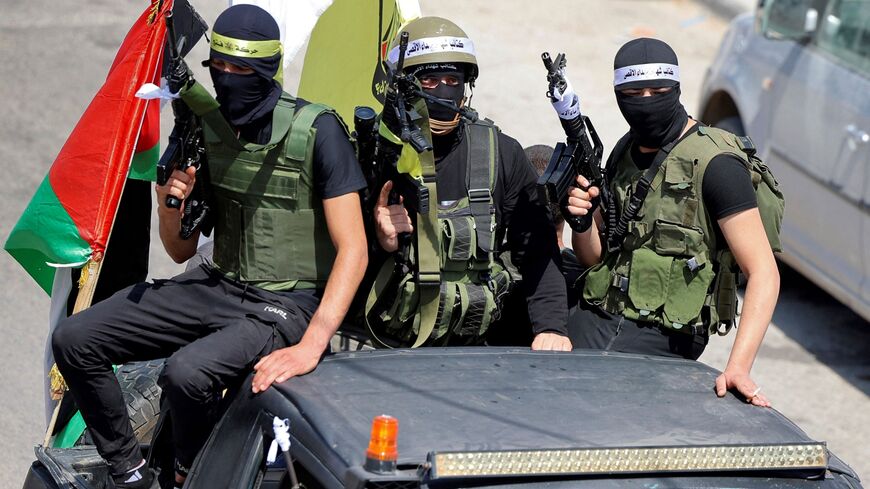 Fighters wearing the insignia of the Palestinian Al-Aqsa Martyr's Brigades faction, affiliated with the Fateh movement, hold assault rifles as they ride in the back of a pickup truck during the funerary procession for three Palestinians killed during an operation by Israeli forces in Jenin, in the Jenin camp for Palestinian refugees in the occupied West Bank on June 17, 2022. - JAAFAR ASHTIYEH/AFP via Getty Images

GAZA CITY, Gaza Strip — The Israeli newspaper Israel Hayom reported June 13 that the Palestinian Islamic Jihad movement is gearing up for a military escalation in response to the ongoing Israeli operations in the northern West Bank, especially in Jenin.

The report comes at a time when the Islamic Jihad is seeking to unify the Palestinian factions in the Gaza Strip to respond to the Israeli violations in the West Bank, a possible escalation for the first time since May 2021.

According to Palestinian sources quoted by the Israeli newspaper, the Islamic Jihad is convinced that Israel is slowly working toward eroding the movement’s cells in the northern West Bank, especially Jenin. The sources also said that the Islamic Jihad seeks to avenge those killed by Israel.

Batsh said that the Palestinian forces and factions are “following up on the settlements, Judaization, land confiscation, field executions and cold-blooded killings taking place in Jerusalem, the West Bank and the Jordan Valley.”

The meeting came a day after Islamic Jihad Secretary-General Ziad al-Nakhala warned Israel in a press statement on June 12 against continued violations. Nakhala pointed out, “We, in the Islamic Jihad in Palestine, take very seriously these major attacks on Palestinians in the West Bank and Jerusalem and on prisoners in Israeli prisons. ... We will not allow this humiliation to linger.”

One of the most prominent prisoners currently on hunger strike is Islamic Jihad member Khalil al-Awawdeh, who has been on a hunger strike for 103 days.

The Israeli operation dubbed “Wave Breaker” continues to act aggressively in the West Bank, namely in Jenin, where the Israeli forces killed three Islamic Jihad militants on June 17. Palestinian factions in Gaza, led by the Islamic Jihad, said, “This crime shall not be forgiven.”

In a press release issued on June 17, the Islamic Jihad added that “these crimes will backfire on Israel.”

The Israel Army Radio (Galatz) reported that the army had decided to liquidate the Jenin Brigade of Al-Quds Brigades, the military wing of Islamic Jihad, which is leading the action against Israel in the West Bank. According to Israeli security sources, the Israeli army will not allow the Jenin model to be transferred to other cities in the West Bank no matter the scale of clashes or even tension with Gaza.

Daoud Shehab, the Islamic Jihad leader in Gaza, told Al-Monitor, “Israel bears the consequences of the crimes it commits in the West Bank, and the increasing violations monitored by the movement over the past weeks in Gaza, from shooting at fishermen in the middle of the sea or at farmers on the eastern border.”

Shehab pointed out that “that majority of the people in Gaza are struggling to survive because of the Israeli army’s attacks, and we will not allow economic incentives, including the work permits issued by Israel, to prevent a decisive response from the factions. We will not barter human rights for political rights.”

“We are ready to respond because we can no longer bear further aggression and pressure, and we are fully capable of engaging in successive and long rounds [of confrontation] within a national consensus,” Shehab said.

Shehab indicated that Egypt was mediating to avoid a military confrontation. “Some parties that are mediating between the Palestinian factions and Israel, namely in the prisoners file, have asked Israel to consider ending the suffering of the prisoners on hunger strike. But the problem lies in Israel’s lack of commitment. So the situation might explode at any time,” he said.

Hassan Abdo, a political analyst close to the Islamic Jihad, believes that the meeting of the Palestinian factions on June 13 was aimed at “garnering legitimacy and unanimous approval for the next response to Israeli violations. The response may come from Gaza, or from other geographical sides.”

On June 17, an Israeli army observation balloon fell inside the Gaza border and was collected by Palestinian factions. Israel had fired warning shots to prevent Palestinians from taking the equipment inside of it. Surveillance balloons equipped with modern 360-degree cameras are deployed along the border with Gaza to monitor any suspicious movements on the border with Israel.

The incident was followed June 18 by the launch of a rocket from Gaza by unknown militants toward southern Israel.

Mustafa al-Sawaf, a political analyst close to Hamas, told Al-Monitor that Israel's reaction to the spy balloon “is a serious event, in addition to the developments in Jenin, which may indicate that a military confrontation is drawing near.”

As part of preparations for a potential upcoming battle, Islamic Jihad began military drills on June 18 under the name Azm al-Sadiqin (Arabic for the “Will of the Honest”) in which missile, land and sea artillery units took part.

Islamic Jihad, in isolation from the rest of the factions in Gaza, led a military escalation against Israel in November 2019 following the assassination of one of its most prominent field commanders, Baha Abu al-Atta.