Various major Palestinian factions are working together on a new platform to challenge Fatah's dominance of the Palestine Liberation Organization. 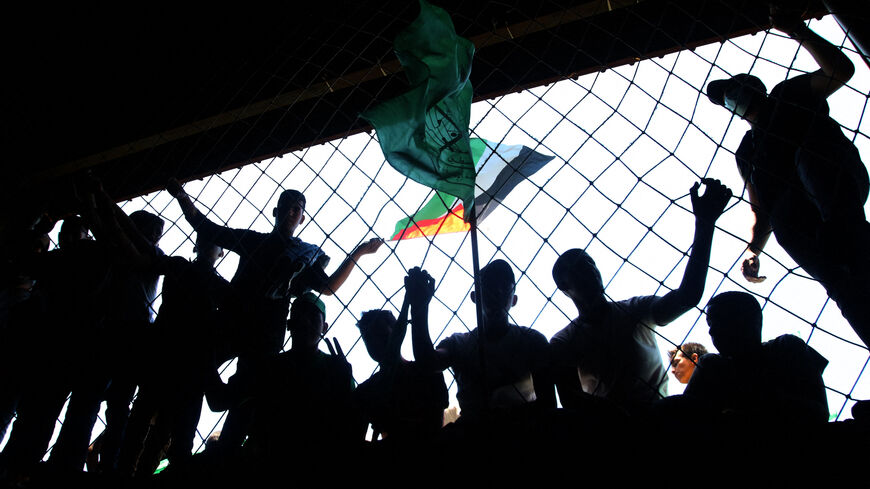 People wave Palestinian flags during a rally attended by the Palestinian Hamas movement's leader Ismail Haniyeh (unseen), during his visit to the southern Lebanese city of Saida, on June 26, 2022. - MAHMOUD ZAYYAT/AFP via Getty Images

RAMALLAH, West Bank — Hamas political chief Ismail Haniyeh called June 19 for an agreement on a Palestinian strategy to overcome the internal division and build a national front that safeguards Palestinian principles and nurtures the resistance while managing the conflict with Israel and serving as a reference for the rebuilding of the Palestine Liberation Organization (PLO).

Since 2007, the Palestinian territories have been reeling amid political division between the West Bank and Gaza. Efforts since then to achieve reconciliation and end the division have found no success.

Hamas aspires to bring together the Palestinian factions amid a national reconciliation deadlock and a failure to reform the PLO and in the wake of the May 2021 battle with Israel.

This year's PLO Central Council meeting was boycotted by several factions including Hamas, the Popular Front for the Liberation of Palestine (PFLP) and the Palestinian Islamic Jihad (PIJ) Movement in February. The joint statement issued by Hamas, the PIJ and the PFLP on Feb. 9 is seen by some as the first step toward establishing a comprehensive national strategy that would end the Palestinian Authority's monopolization of the political decision-making process.

Hamas leader Khaled Meshaal said in February 2022 that Hamas is seeking to form a unified front that will not serve as a substitute to the PLO. He added that by cooperating with the PLO, such a front would be able to draft a national project.

Factional dialogues for the formation of a new front are taking place in the Gaza Strip and the Lebanese capital Beirut. Haniyeh arrived in Beirut June 21 and met with a PIJ delegation on June 24. He is to meet a PFLP delegation headed by the PFLP Deputy General Secretary Jamil Mezher that is also in Beirut.

Ahmed Abu Hamza, spokesman for al-Quds Brigades, the Palestinian Islamic Jihad’s military wing, announced on June 18 the Azm al-Sadiqin military drills in Gaza as part of the preparations for any future battle with Israel. Hundreds of fighters of al-Quds Brigades’ military units, most notably the missile and artillery units, took part in the Azm al-Sadiqin drill that ended on June 20.

On June 21, the official website of al-Quds Brigades broadcast video segments of the maneuvers, including firing several artillery and rockets toward the Gaza sea, given the small space in Gaza for missile testing. For the first time, the drill stretched along the coastline of the Gaza Strip. The media outlets in Gaza were not allowed to cover the drill so as to maintain the maneuvers' secrecy.

Palestinian Islamic Jihad spokesman Tariq Salmi told Al-Monitor, “The al-Quds Brigades chose to conduct the Azm al-Sadiqin drill three days following the assassination of three Jenin Brigades militants in Jenin, to confirm that the resistance in Gaza and Jenin is unified on the ground and the Palestinian people support the Palestinian resistance against the Israeli occupation’s crimes that cannot be tolerated.”

He stressed that “the PIJ’s reaction to the crimes of the Zionist occupation involves coordination with all Palestinian factions.”

Hassan Abdo, a political writer close to the PIJ, told Al-Monitor that the “PIJ in Gaza operates on two levels. One of them is political. The Palestinian factions in Gaza met on June 13 to discuss the Israeli escalation in the northern West Bank, where Israel carries on with the field assassinations and the flag march in the occupied Jerusalem. The PIJ, following the meeting, affirmed the resistance’s right to the joint Palestinian factions’ room to confront the occupation’s violations. The second level is military through the Azm al-Sadiqin drills, which come as part of the efforts to ramp up military capabilities and preparations in the next escalation with the occupation. This is particularly true after PIJ Secretary-General Ziad al-Nakhala warned the Zionist occupation on June 12 against continued field assassinations in the West Bank and that they can't be tolerated.”

In May, the Saudi Asharq TV quoted leaders in Hamas as saying that the movement is leading a dialogue between the factions to form a new collective political body bringing together the anti-Fatah forces and that the dialogues that took place in Beirut and Gaza “have come a long way,” adding that the formation of a broad national front including “Fatah’s political opponents” has been discussed.

PIJ leader Ahmad al-Mudallal told Al-Monitor, “There is Palestinian consensus whereby the PLO is inactive and has no impact on the political reality. This is why calm in the face of Israel cannot remain the name of the game. There is a need for a unified national front, and this was established during the conference held in September.”

He went on, “We have been marred by internal division for 16 years now, and we are in a phase of national liberation. This is why it is a must to develop new strategies and draft a unified consensual project, hence the reports about the need for a national leadership or front.” He said that what is being discussed will not serve as a substitute for the PLO, as the goal is to keep the Palestinian resistance alive in all its popular and armed forms.

Mariam Abu Daqqa, a member of the PFLP Political Bureau, told Al-Monitor that her organization called for the formation of a broad national front that includes all national forces and figures. She said the May 2021 conflict served to unify the Palestinian position and breathed new life into the Palestinian cause both locally and internationally.

Abu Daqqa added that preparations are underway to formulate and prepare a program for a broad national resistance front that includes all parties wishing to join it.

Khalil Shaheen, director of the Palestinian Center for Policy Research and Strategic Studies (Masarat), told Al-Monitor that the move was prompted by several factors. He said reforms within the official institutions, specifically the PLO, have become minimal, the PLO is seen as paralyzed and the PA will face a conflict over succession after Abbas. He said that Hamas, the PIJ and the PFLP have discussed a tactical tripartite alliance on many occasions, such as after Abbas hurriedly appointed Hussein al-Sheikh as secretary of the PLO's Executive Committee.

Shaheen stressed, “These factions feel that they need to work to bring about change” adding that the factions see many dangers in the current situation, including the possible imposition of a presidential appointment, which could cause a final and irreversible division between Gaza and the West Bank.