Shortly after the Palestinian Islamic Jihad named Ziyad al-Nakhalah to be its new secretary-general and elected member of the political bureau, Nakhalah threatened Israel and launched an intra-Palestinian initiative in his first political discourse. 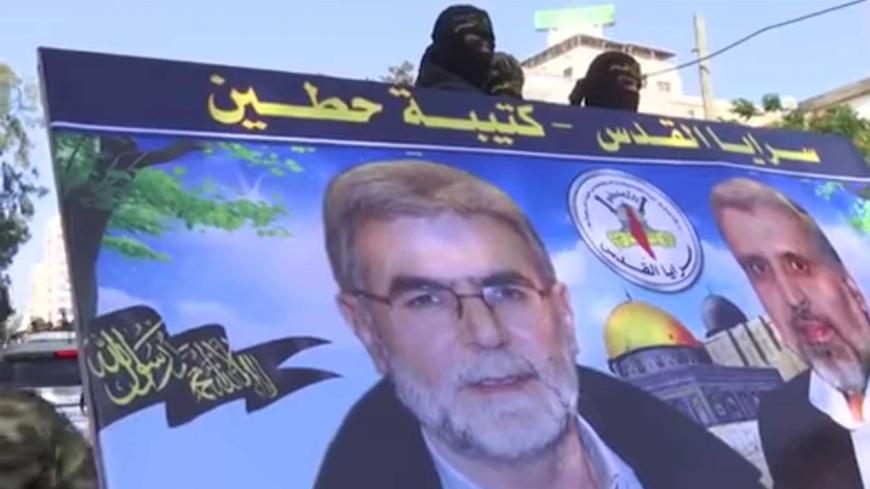 Ziyad al-Nakhalah, the new secretary-general of the Palestinian Islamic Jihad, is seen on a placard during a rally in his honor held by Islamic Jihad militants in Gaza City, Gaza Strip, in a still from a video recorded Oct. 4, 2018. - YouTube/AP

GAZA CITY, Gaza Strip — Ziyad al-Nakhalah, the new secretary-general of the Palestinian Islamic Jihad (PIJ), gave Oct. 5 his first political discourse. He threatened to respond to the Israeli army killing of peaceful protesters along the border with the Gaza Strip.

Speaking in front of protesters in eastern Gaza, Nakhalah said, “The courageous Palestinian resistance has the capacity and capabilities to make the Gaza envelope and the surrounding settlements uninhabitable. … Al-Quds Brigades and [Izz ad-Din] al-Qassam Brigades will not keep mum and will act in the right moment to halt any disdain for the blood of our people.”

In his televised remarks, Nakhalah also proposed an initiative to end the Hamas-Fatah divide. The initiative consists of five points, namely convene the PLO's Temporary Leadership Framework, and ensure that the Egypt-mediated truce agreement between Hamas and Israel does not force the PIJ and resistance factions to refrain from military action against any Israeli violation.

According to the PIJ’s Sept. 28 announcement, Nakhalah is set to succeed Ramadan Shalah, who is suffering from health problems. The movement also elected in its first internal elections since its establishment in 1980 new members for its secretly elected political bureau in the Palestinian territories, abroad and in Israeli prisons.

In a press conference Sept. 28 in eastern Gaza City, PIJ spokesman Daoud Shihab said, “A democratic climate prevailed over the elections. The voter turnout reached 99,3%.” Shihab then proceeded to unveil the names of nine political bureau members in the Gaza Strip and abroad. The movement, however, did not reveal to the media the names of the political bureau members in the West Bank, Jerusalem and Israeli prisons for security reasons and out of fear of being chased by Israel.

Nakhalah, 65, served as deputy secretary-general of the PIJ since 1997. He is wanted by the Israeli authorities, and was added to the US list of designated terrorist groups and individuals in January 2014. The United States has allocated $5 million for information that would help arrest him.

A member of the PIJ’s Central Election Committee told Al-Monitor on condition of anonymity that the movement has been preparing for the elections for more than a year, setting up an internal electoral system and narrowing down the number of its cadres eligible to vote. He said that the elections were held Sept. 27 in the Palestinian territories and abroad where the movement is present. The electoral process, he noted, started with accepting candidacies and appeals, followed by selecting a new secretary-general unanimously, and electing new members of the political bureau.

According to the source, the political bureau is composed of 15 members, nine of whom were elected by direct ballot, four by acclamation and the remaining two are to be selected by the secretary-general. He noted that the PIJ is slated to hold elections for a new leadership every four years.

The elections, which were held in secrecy away from the media and public, drew criticism from some of the PIJ’s figures and leaders. Islamic Jihad leader Ibrahim Abu Mur wrote in a Facebook post Sept. 26 that his name was dropped from the candidate list, and noted that this is the result of his positions toward the “sloppy leadership.”

On the other hand, the Saudi Asharq Al-Awsat newspaper wrote in an article Sept. 29, “The outcome of the elections has further strengthened the pro-Iran current’s influence over the movement’s leadership. Iran prefers that Nakhalah takes the mantle of secretary-general without any elections, with Hindi as deputy secretary-general, fearing that the latter might manage to take charge since [Iran believes] he has close ties with the Muslim Brotherhood and Hamas.” The PIJ, in response, attacked the newspaper.

Hindi, a member of the PIJ’s political bureau, has strong relations with Hamas, which drew criticism against him. He has been residing in Turkey for the past two years.

Hussein Sheikh al-Islam, the adviser to the Iranian minister of foreign affairs, welcomed the PIJ elections. He told Al-Monitor that having Nakhalah as secretary-general will strengthen the resistance movement in the Palestinian territories. Islam stressed that Iran enjoys close ties with the Palestinian resistance movements, including the PIJ, and that these ties are evolving with time.

Ihsan Ataya, representative of the PIJ in Lebanon, told Al-Monitor that several PIJ allies, including Iran, Hezbollah, Hamas and Fatah, congratulated Nakhalah. He said that the elections have produced a new leadership that will be charged with the organization of the movement’s different institutions.

Ataya noted that the political bureau will hold a meeting soon, without specifying a date, to tackle many internal dossiers, including the electoral system and how it can be further refined, and whether or not an alteration will be made to the movement’s political document, which was unveiled in February.

He added that managerial tasks will be redistributed among the political bureau’s new members.

The deteriorating health situation of Shalah has pushed forward the electoral process in order to rearrange the movement’s internal affairs. Shalah underwent open-heart surgery in early 2018, but complications have forced him to leave the secretary-general post.

Hasan Abdo, a political analyst and close associate to the PIJ, told Al-Monitor that the most notable thing about the PIJ’s internal elections is the democratic climate that saw the participation of the majority of the movement’s political and military personnel.

He stressed that this election refutes the accusation leveled against the Islamic movements around the world about their non-democratic practice, and noted that the PIJ publishing the names of the winning candidates in the media leaves no doubt about the transparency of the electoral process.

Abdo believes that a new stage awaits the PIJ in the wake of the elections and the newly elected leadership, hoping that the movement fosters stronger internal and foreign relations to serve the Palestinian cause.

Imad Ayada, political science professor at Birzeit University, told Al-Monitor, “The Islamic movements are adjusting themselves with the ever developing demands of their communities. They are modernizing mechanisms to choose leaderships and organizational structures, gradually coming out of the spectrums of secrecy and ambiguity that have long prevailed. This will result in a transparent and clear work, thereby asserting their position as an active force in the community.”

Despite the accusations that the new leadership is close to Iran, considering it to be similar to any other resistance movement in need of backers, Ayada noted, the movement’s history shows that it has always maintained a balance in its relations and distanced itself from any sectarian or political conflicts.

With the accusations leveled against the new secretary-general by Saudi media outlets, as well as Israeli ones, such as Channel 10 and Kan on Sept. 28, Nakhalah is facing a real test in his new position, which requires him to balance the movement’s foreign relations in a way to meet Palestinian interests.