The Islamic Jihad has been making it clear to Hamas, Egypt and Israel that the rules of the game have changed in Gaza over the past few months. 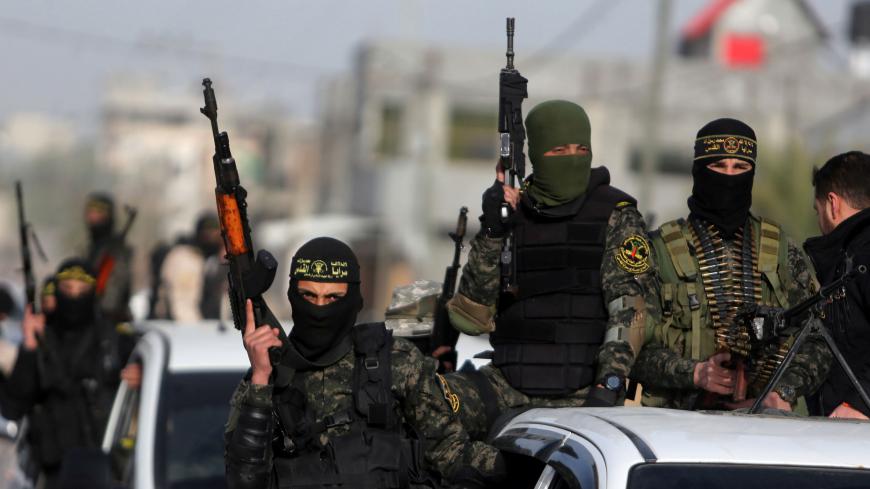 Palestinian Islamic Jihad militants ride in a pickup truck as they celebrate the release of Islamic Jihad member Tarek al-Mudalal from an Israeli jail, in Rafah, in the southern Gaza Strip, Jan. 18, 2018. - REUTERS/Ibraheem Abu Mustafa

Who’s leading whom in the Gaza Strip? Does Hamas lord over the Palestinian Islamic Jihad (PIJ), a militant movement supported by Iran, or is it the other way around? Over the past few months, Israeli security forces have noted the growing influence of the Islamic Jihad on Hamas. Seeking to avoid problems with Iran, the Hamas leadership feels it has little choice but to follow the Islamic Jihad’s dictates in their actions when dealing with Israel and Egypt.

This was exacerbated following the appointment of Ziyad al-Nakhalah as secretary-general of the Islamic Jihad in September 2018. Nakhalah replaces Abdullah Ramadan Shalah, who has been in a coma ever since he suffered a stroke in April 2018.

Born in Khan Yunis, Nakhalah spent 14 years in Israeli prisons until he was released in the 1985 prisoner exchange called the “Jibril deal.” He was later expelled to Lebanon, where he was brought into the Islamic Jihad leadership by the movement’s founder, Fathi al-Shaqaqi. Shaqaqi was killed in Malta in 1995 in an attack attributed by foreign news sources to the Mossad. The hit was allegedly in retaliation for a terrorist attack at the Beit Lid intersection in January 1995 in which 21 soldiers and a civilian were killed. Ramadan Shalah was lecturing in the United States at the time of the assassination, but he was called back to take over as the movement’s secretary-general. He then appointed Nakhalah as his deputy.

Throughout all of these years, Ramadan Shalah had been loyal to Iran, which funded PIJ to the tune of $70 million per year, drawn from the budget of the Islamic Revolutionary Guard Corps. Under him, Islamic Jihad found itself trapped between a desire to appease Iran, which, in turn, wanted a significant foothold in Gaza, and its tenuous relationship with Hamas, which actually controlled the Gaza Strip. Given these conflicting interests, Ramadan Shalah was extremely cautious during his tenure. He recognized the inherent limitation facing a small organization with about 1,000 armed fighters and always sought to find a balance between the interests of Islamic Jihad and Iran in Gaza and the reality on the ground, where Hamas maintained absolute control and enjoyed full operational ability.

Inevitably, the relationship between Islamic Jihad and Hamas was complicated. On one hand, the two groups fully cooperated operationally in times of emergency and during armed conflicts with Israel. On the other hand, Islamic Jihad competed with Hamas over Palestinian public opinion, particularly when it came to the question of who was more loyal to the idea of a genuine armed jihad against Israel.

The newly elected Nakhalah appointed Mohammad al-Hindi, who lives in the Gaza Strip, as his deputy. I met Hindi on several occasions during the second intifada (2000-2005), and he even agreed to be interviewed for Israeli television. I interviewed and held discussions with him about the group’s role in Gaza, even before the Hamas coup in 2007 when the Palestinian Preventative Security Forces under Mohammed Dahlan hunted down senior members of Islamic Jihad’s military wing. The impression I came away with then was that Hindi knew the exact place and strength of the militant Islamist movement as it entered the vacuum left by Hamas, which had become a popular political movement that was sometimes forced to compromise, given the complicated reality of dealing with Israel.

In this way, Islamic Jihad became a contractor for Hamas on more than one occasion. In some cases, it fired rockets at Israel just to ensure there would be no Hamas fingerprints on the operation. At other times, Islamic Jihad tried to challenge Hamas in an effort to prove to the people of Gaza and their custodians in Tehran that their magnanimous funding was being put to good use.

As clear as the rules of the game were, they started changing in the last few months. Nakhalah succeeded in transforming Islamic Jihad from an organization that takes its cues from Hamas to an activist group that initiates its own activities.

On Jan. 22, a Palestinian sniper in Gaza shot an Israel Defense Forces officer in the head during a riot along the border fence. As if by miracle, the bullet was stopped by the officer’s helmet, and he only suffered minor injuries. Islamic Jihad took responsibility for the incident on Feb. 3 and released a video clip of the shooting. The group’s spokesman, Daoud Shihab, explained that the reason the documentation was released was to uncover some of Israel’s daily violations of Palestinians' “most basic human rights.” In other words, Islamic Jihad will not be leaving the right to defend Palestinians to Hamas alone.

The Israeli security establishment has marked Bahaa Abu al-Ata, commander of the military wing of Islamic Jihad in the northern part of the Gaza Strip, as someone working to create a new reality on the ground and interfere with the unofficial truce between Hamas and Israel. Israel sent a message about him to Hamas through its Egyptian middlemen and at the same time released his photo to the Kan news organization on Jan. 30, claiming that he was responsible for violating the state of calm in Gaza and for the sniper attack.

In response, Islamic Jihad warned Israel not to do “anything stupid against the commanders of the military wing of Islamic Jihad, since that would lead to devastating consequences.” It then released footage of the sniper firing his shots. The film clip wasn’t intended for a Palestinian audience, nor was it part of some effort to brag to Israel about what the group was capable of doing. It was actually aimed at Egypt after Israel sent a message to the Egyptians that if Hamas does not rein in Islamic Jihad, it would pay a steep price. “If the quiet is not maintained in Gaza, even during the campaign period, we will not hesitate to act,” Israeli Prime Minister Benjamin Netanyahu warned Hamas at the start of this week’s Cabinet meeting on Feb. 3.

So far, it looks like Islamic Jihad is managing to bend Hamas to its will. In the past, any shooting — which would have posed a problem to Hamas and led to the collapse of its understanding with Israel and Egypt — would have resulted in the arrest of the people who fired the shots or even of the people who sent them. This was true even when Ramadan Shalah stood at the head of Islamic Jihad.

Instead, head of the Hamas political bureau Ismail Haniyeh arrived in Cairo on Feb. 4, together with Nakhalah, for discussions with Egyptian intelligence officials on ways to maintain calm with Israel.

According to a report in Al Akhbar newspaper, Islamic Jihad wants to create a situation in which the organization would respond to every Israeli attack on the Gaza Strip or any Israeli violation of the terms of the truce. It is doubtful that Egypt will accept this, but one thing is clear: Nakhalah arrived in Cairo with Haniyeh as an equal and a peer.