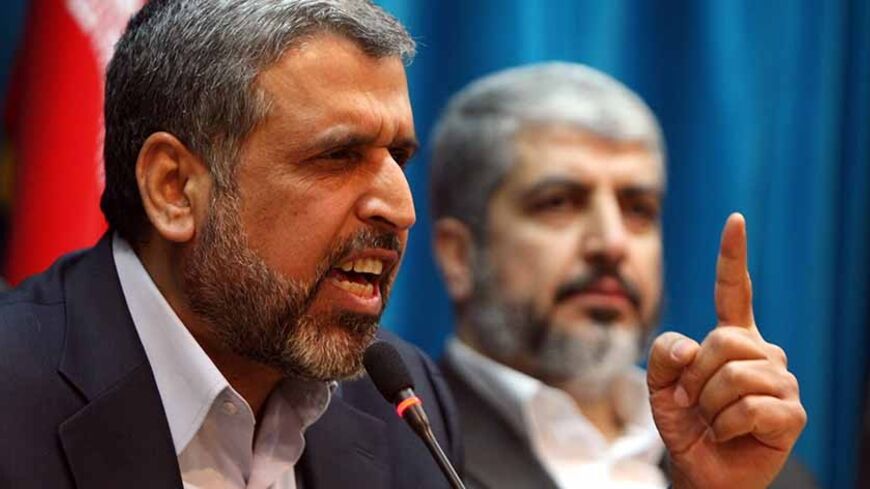 GAZA CITY, Gaza Strip — Iranian officials on Feb. 5 received a high-level Palestinian Islamic Jihad delegation headed by Ramadan Shallah, the movement’s secretary-general. Accompanying him was Islamic Jihad’s deputy leader, Ziyad al-Nakhalah, whom the US Department of State announcement on Jan. 23 was being added to its list of “specially designated global terrorists.” It was the first visit by Islamic Jihad representatives to Iran since President Hassan Rouhani took office in 2013.

"While this trip can be classified as a routine visit, it is important given that it comes after Nakhalah was added to the terrorist list and after Rouhani took office," said Islamic Jihad spokesman Daoud Shihab.

During a meeting with Al-Monitor at his office, Shihab noted that this is not the first time Iran has publicly expressed its support for Islamic Jihad and its leaders. He asserted that Iranian officials had at other meetings confirmed their rejection of the targeting of the Palestinian people and figures.

"The warm welcome that the delegation received expresses Iran's solidarity [with Islamic Jihad] and its rejection of US policy. It shows that [Tehran] still supports resistance factions," said Shihab. "This was a large delegation, headed by Ramadan, and it included his deputy and a number of members of the movement's political bureau, in addition to Islamic Jihad's representative in Iran. The visit comes at a time when some believe that Tehran's policy toward resistance movements is changing. But Iran is reiterating its support for the Palestinian cause, regardless of the developments in its relationship with the West. The Palestinian cause is one of Iran's objectives."

Shihab asserted that the visit was highlighted in the media because of "an increase in the number of foreign correspondents [in Iran], after Rouhani allowed them to enter the country, as the anniversary of the Islamic Revolution is approaching. There are side attractions to the anniversary's celebration that attract media, such as a film festival and visits by European officials."

Ali Nourizadeh, head of the Centre for Arab and Islamic Studies in London, discussed the Islamic Jihad–Iran relationship with Al-Monitor in a phone interview. He contended, "Iran considers Islamic Jihad part of the Iranian governmental institution and places it on par with Hezbollah. The only difference is that one is Shiite, and the other is Sunni. Both of them reflect the Iranian image. Openness to the US cannot happen at the expense of Islamic Jihad, as the Iranian government's connection to Hamas stems from political interests, while its relationship with Islamic Jihad is strategic and ideological."

The visit by Islamic Jihad representatives to Iran came a week after a Jan. 27 visit to Tehran by Fatah Central Committee member Jibril Rajoub, acting as an official envoy of Palestinian Authority President Mahmoud Abbas and thus raising questions about possible new political alignments in the region. Shihab believes that Rajoub’s visit was significant. According to him, Palestinian forces would be making a mistake by not being open to the forces in the region. “It is important to establish relationships with all forces because the Palestinian people need all states to stand by their side in the context of [creating] a positive atmosphere,” he said.

Moreover, Shihab sees Rajoub's trip as representing a new development in the vision of Abbas and the Palestinian Authority. “All cards must be used to counter US pressure, which has been strongly exerted against President Abbas. Therefore, Abbas ought to form a bloc to face the US and counter its pressure. Iran’s support is significant in this context,” he said.

Nourizadeh, reflecting on Rajoub’s visit, claimed, "Abbas wanted to appeal to Iran’s influence to resolve the crisis in Yarmouk [Palestinian refugee camp], and therefore Rajoub was dispatched as a security figure. Indeed, the visit was successful in explaining the positions of the two parties and advancing their relations. It is expected that Iran will invite Abbas for a visit in a month or two, which reflects changes in the Iranian stance.”

In the same vein, during a joint Fatah-Hamas press conference on Feb. 9 in front of Hamas Prime Minister Ismail Haniyeh's residence, Al-Monitor inquired about the impetus behind the new coalition that Abbas apparently seeks to forge with Iran. Fatah Central Committee member Nabil Shaath, responded, “There are new facts in this world, including the international agreement with Iran in Geneva, in which Russia played a major role. All countries are seeking to ensure the success of [this agreement] through security and peace. Indeed, Russia succeeded in preventing a war on Syria and Iran. In light of this fact, why should there be any objection to a strong Palestinian-Iranian relationship?”

He further explained, “We have succeeded in Europe in the boycott of a large number of Israeli settlements, and we have recently boycotted banks as well. We will succeed to do the same in other regions. We are well-aware that the US is not the sole power and it is in the [Palestinian] people’s best interest to be open to the region,” he added.

Hamas leader Khalil al-Haya also responded to Al-Monitor's question, stating, “The entire region is going through a reconstruction phase at the level of all forces and programs. These relationships with the world’s [various states] — whether Iran or Russia — will be to the advantage of our people and their cause, which has been ongoing for more than 60 years. Fatah has turned to Iran, as Hamas had previously done and will do later on. They both turn toward whoever supports the resistance. We are a national liberation movement in the holistic sense, and therefore we need the support of the entire world to support our cause.”

While the new Iranian leadership has publicly opened up to Fatah and Islamic Jihad, Hamas' isolation has become more pronounced. Nourizadeh believes that Iran in the past had given Hamas more than $1 billion, at an average of some $150 million annually. This is in addition to providing it military support and training.

“Iran did not do this merely to help Hamas, but to impose the Iranian government’s diktats in the region. When Hamas took the decision to distance itself from what was happening in Syria, the aid provided by Iran decreased. The aid it receives now is unofficial aid,” he asserted.

The fate of bilateral relations between Iran and the Palestinian factions will continue to depend on the outcome of talks between Hamas and Fatah scheduled to be held in the coming days to implement a reconciliation agreement on the ground.