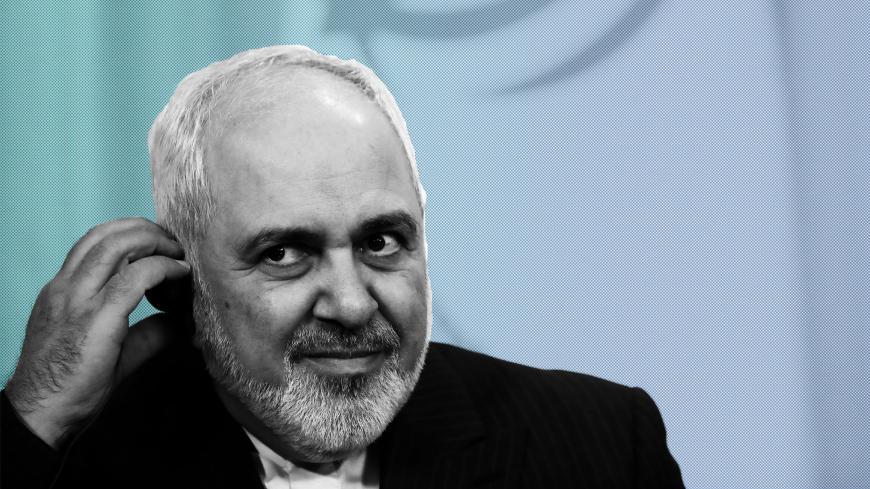 The next day, Zarif contacted the head of Hamas’ political bureau, Ismail Haniyeh, to reassert Iran's refusal of the US deal. He reiterated Iran’s position backing the Palestinians, and its willingness to exert diplomatic and political effort to support them.

Although Zarif’s call to Haniyeh was typical of the strong relationship between Hamas and Iran, his call to Abbas was the first of its kind in many years. Relations between the Palestinian Authority (PA) and Iran are shaky and frozen, at best.

Abbas Zaki, a member of the Fatah Central Committee, leads a current within the PA that advocates rapprochement with Iran. He viewed Zarif’s recent phone call as Iran expressing its concern over the dangers posed by the US deal.

He told Al-Monitor that the deal targets all entities in the region who are not affiliated with the United States and Israel. “The announcement of the deal is an opportunity for the advocates of the Palestinian cause to unite to counter the US trusteeship and its Mideast peace deal,” he said. “While Iran seems to be seeking to achieve Palestinian reconciliation, the Palestinians ought not to wait for a foreign party to end their division. I don’t think the Arab countries are bothered by the Palestinian-Iranian contacts. We need Arabs and Iranians on our side. President Abbas, who is accepted by Iran, could be the appropriate figure to act as an Arab-Iranian messenger to ease the tension in the region.”

Iran has shown great opposition to the US deal. Before Zarif’s contacts with Abbas and Haniyeh, Esmail Ghaani — who replaced Qasem Soleimani as chief of Iran's Quds Force — called Haniyeh and Ziad al-Nakhala, leader of the Islamic Jihad, Feb. 2 to voice his rejection of the deal. Ghaani expressed Iran’s readiness to work to thwart the deal.

Just hours after Donald Trump announced the deal Jan. 28, Zarif tweeted that "the so-called ‘Vision for Peace’ is simply the dream project of a bankruptcy-ridden real estate developer. But it is a nightmare for the region and the world."

A member of Iran's Shura Council who is close to Khamenei told Al-Monitor: “Iranian contacts with all Palestinian sides, Abbas and the factions are evidence of the danger that Iran senses from the deal. Iran believes the deal’s announced goal is to annihilate the Palestinian cause, but its implicit goal is to besiege and isolate Iran from the region. This is the danger that Iran has perceived and that prompted it to contact the PA and overlook any previous disputes with it. At this point, Iran does enjoy the luxury of maintaining bilateral disputes.”

In a parallel development, Mousavi accused Saudi Arabia of blocking an Iranian delegation from participating in the Organization of Islamic Cooperation's meeting in Jeddah to discuss the US deal. In a Feb. 2 statement, Mousavi said Saudi Arabia denied a visa to the Iranian delegation, led by Deputy Minister of Foreign Affairs Hossein Jaberi Ansari, “until the final hours before the meeting.”

Saudi Arabia has not commented on the Iranian accusation.

Speaking to Al-Monitor, Khaled Qaddoumi, Hamas' representative to Iran, said Zarif’s contact with Abbas was initiated by Iran, not the PA. “Iran is well aware that the Palestinian cause is facing a historic juncture, and therefore it wants to put aside all intellectual, political and ideological differences with Palestine," he said. "Israel is our common enemy. The danger that the US poses to Palestinian, Arab and Islamic parties should force us all to unite to confront the common enemy.”

In an Al-Monitor interview in February 2014, Palestinian Foreign Minister Riyad al-Maliki said the PA has “normal relations” with Iran. “We have an embassy, and we have attended official meetings with Iranians outside the region," he said. "I see Foreign Minister Zarif at many meetings.”

​Saber Kol Anbari, an Iranian writer and a researcher for Al Jazeera, told Al-Monitor, “Zarif’s contact with Abbas seems remarkable because it is the first in many years, after their diverging positions on the Palestinian cause. Iran rejects the peace process, while the PA politically embraces it. Despite the divergent views between the two sides, the announcement of the US deal prompted Iran to establish contacts with the PA and the factions, aimed to come out with a united position against this deal.”

Jibril Rajoub, a member of the Fatah Central Committee, visited Tehran in January 2014 — the first Fatah official to visit Iran in decades. Since then, relations between the PA and Iran have been marred by tensions, with the PA accusing Iran of interference in Palestinian internal affairs.

For Abdel Sattar Qassem, a professor of political science at An-Najah National University in Nablus, “Iran wants to keep having a role in the Palestinian cause, and prefers to solve this cause through armed resistance.”

He told Al-Monitor, “I don’t expect Zarif to speak with Abbas about the resistance. Meanwhile, Abbas does not seem to be willing to renege on his regional alliances. Any change might negatively affect his political future. The Iranian contact with Abbas will not disturb Saudi Arabia and Egypt, because Abbas is committed to their policy.”

In past years, Iran has reiterated its desire to see the Palestinian ranks united. Palestinian unity strengthens the position against the US deal, as emphasized during Iran's recent calls with Abbas and Haniyeh.

Iran seeks to obtain regional and international positions rejecting the deal. It believes this deal not only targets the Palestinian cause but rather aims to establish a new regional system, whereby Israel normalizes ties with Arab countries, especially Gulf states, which want to secure Palestinian acceptance of the US deal.